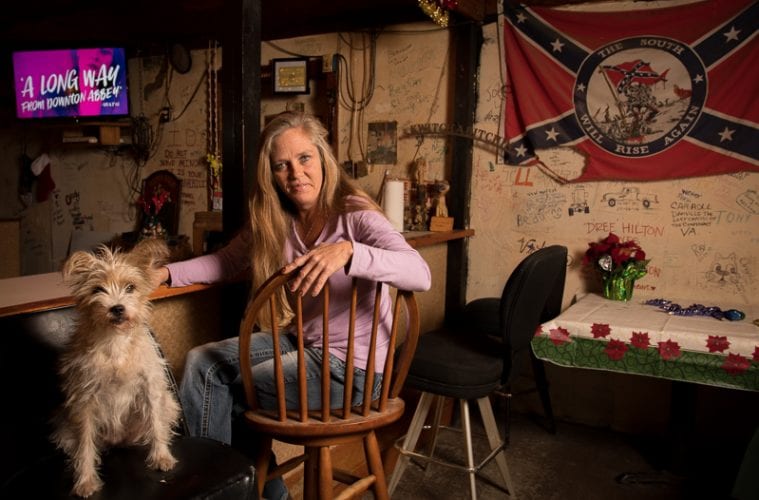 “Being an outsider is part of what I bring to all of my work,” says photographer Forest McMullin. “I use photography to learn about the world.”

Although the Maine native has lived in Atlanta for the past decade as a professor at SCAD, he says he’s seldom felt like more of an outsider than when he hit the road in November of 2016 to photograph small towns across the rural South just after the presidential election. Using a paper atlas, McMullin chose roads based on how thin the lines were on the map and selected destinations based on the smallness of the type used to name the town.

“I made detours whenever whim struck me,” he says of his travels across Alabama, Mississippi, Louisiana and Arkansas. He made a second trip to capture more images in Georgia, North Carolina, South Carolina and Florida in November of 2017.

McMullin is known for his portraits of unusual subjects including customers and vendors at flea markets, restaurant workers on Buford Highway, African American rodeo cowboys and couples in the S&M lifestyle, and he originally imagined another series of portraits would emerge from his trips. But instead he found himself drawn to the landscapes, colors and textures of the farms, buildings, cityscapes and towns that he came across, many of which seemed all but abandoned.

“I saw a lot of fallow fields and muddy earth,” he says of the title he ultimately chose for the series: Late Harvest. “It made me think that at a different time of year, it would be rich, fecund, green and lush. It was just too late. It was too late to harvest.”

McMullin says he was struck by the kindness and openness of many of the people he met, some of whom he did end up photographing. “I hope that the stories the photographs tell show the complexity of the South,” he says. “Stopping to talk to people was an important part of the process. It’s not a simple story. There’s a lot of dead and dying stuff, but there’s reason for hope. I found so much of it incredibly beautiful.”

Thomas Deans Fine Art will present images from Forest McMullin’s Late Harvest from October 12 to November 10. An opening reception for the artist takes place on Friday, October 12, at 6 p.m. McMullin will give a gallery talk on Saturday, October 20, at 2 p.m.