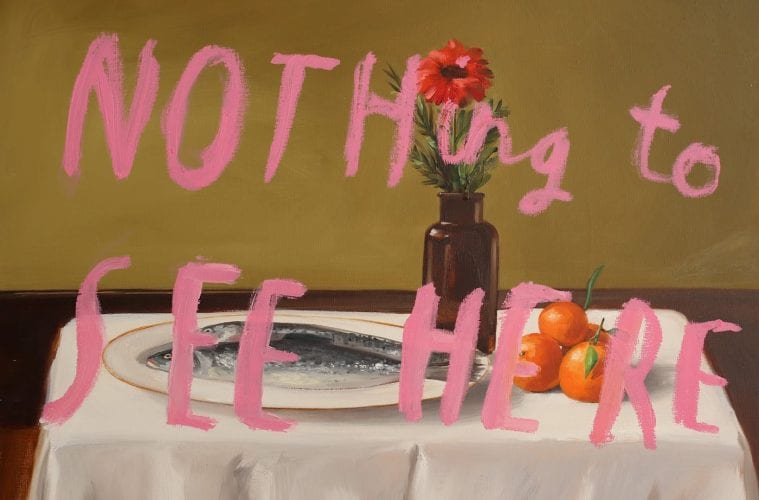 The pervasiveness of language: a look at “Text Me” at MODA

We are surrounded by text. It labels the clothes we wear, tags the sheets upon which we sleep, dots the rooms we inhabit and brands the packaging of food we eat. Due to a deep curiosity as to why people choose the specific objects to buy and surround themselves with, package design and branding became the niche upon which Debbie Millman found traction in the design world. Millman is also an author, educator and host of Design Matters, the first and longest running podcast about design. Of the many artists and designers featured in Text Me: How We Live in Language at the Museum of Design Atlanta, 40 of them have been featured on the podcast. The show is a bold first curation by Millman, and it responds to the pervasiveness of language throughout every space of lives with a full scope of approaches to text-based art.

The exhibition features over 60 artists and designers and places work throughout the entire public museum. This includes the gift shop, where, incidentally, you can find supplemental books and products by the designers, and a window shade by Miranda July for the Thing Quarterly. The text transforms the shade from a light-blocking utilitarian object into a vehicle for raw honesty: “They are now a device for saying things that are hard to say. The shades are intended to face inwards, toward the people living in the shade,” according to the artist. Another Easter egg from the Thing Quarterly can be found in the woman’s bathroom. It’s a shower curtain designed by Dave Eggers that waxes on about how much it [the shower curtain] likes you and doesn’t like your humming.

Space is used evocatively in Text Me, loosely conceptualized around the idea of a home. “How we live with language” is considered in a figurative but also literal sense with furnished spaces representative of a dining room, bathroom, office, living room and bedroom. A long hallway becomes the dining area with a floating table designed by Tristan Al-Haddad. It displays dinner plates that rearrange to say dirty words by James Victore, as well What Not to Talk About Napkins by Tucker Nichols that features awkward icebreakers like “How is everyone’s retirement savings?” The leftover space around the table forces the viewer to glance at the works from across the table or peruse up close and personal, echoing the logistical limitation of conversation at a dinner party. 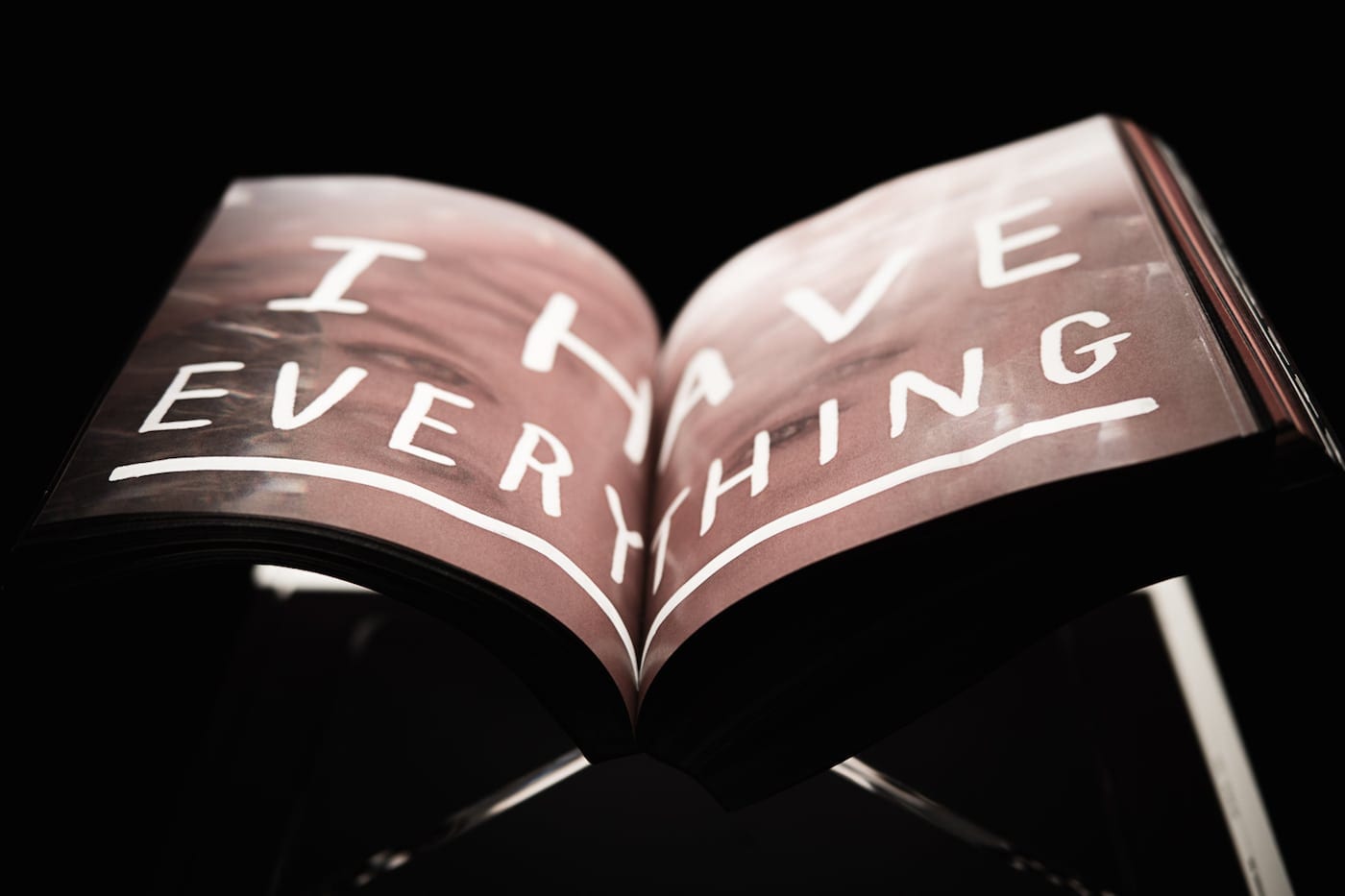 Santiago Carrasquilla: I Have Everything. (Photo by Wendell Withers.)

Text in art adds a layer of meaning on top of the aesthetic quality of the piece, unfolding for those who linger long enough to get the message. Density of text often determines the level of engagement required in order to fully absorb the content. At the lowest end of requirement, words are concentrated to one word or a sentence in a headline format. These works are very direct in their communication. Then there is the medium density text that I liken to that of poetry, often irregularly spaced. At the highest level, the work is novelistic. By far, the densest pieces in Text Me are a series of work by Sam Winston. He categorized and sorted the lines from Romeo and Juliet into three themes — passion, rage and solace. Each theme was typeset and printed into an intimidating block of text. A copy of those images then became the raw material for a hand-cut collage, a dense mass of unreadable cuts of inconceivable commitment.

Of course, the title of the exhibition refers not just to text but also to “texting.” While text messages are often accused of distracting from the quality of our communication, these value judgments have not blunted the popularity of the medium. The digital realm relies fundamentally on language, both in the back end of its programming and in front-end delivery of information to users. The part of the exhibition not readily identifiable as having a corresponding “room” dominated by digital works includes an interactive work by local post-production studio Primal Screen. It consists of a story projected across a long wall, the sentences oscillating horizontally and fading out around the edges. The story which builds a sort of ominous rising action turns on a moment of surprised delight at its climax.  If you stand in the center of the room, in front of the sensor and flail about, your movement will fling sentences of text across the story projected on the wall. 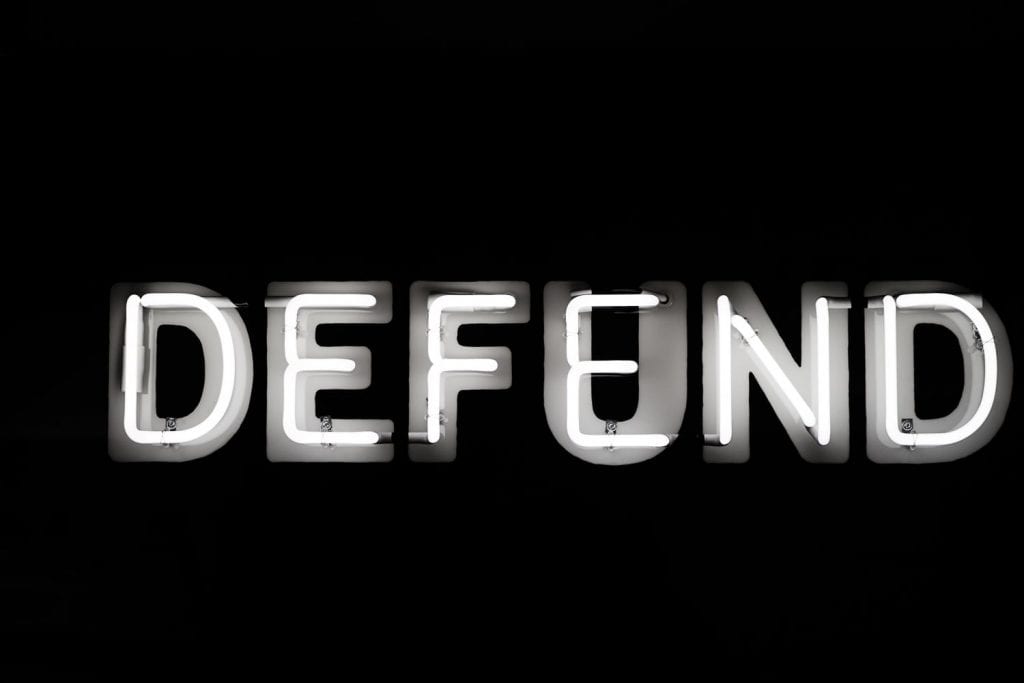 In the sign off to her enduring podcast, Millman says, “We can talk about making a difference, we can make a difference or we can do both.” This show does not shy away from that call to action, and it’s not surprising that there are a number of political pieces, considering design’s intertwined history with politics. I found myself attracted to the political pieces that were deceptively simple like Defund / Defend by Brian Singer. The overlay of the two words encapsulates the symbiotic relationship of both sides of the argument, separated from the specific context. The word “defend” is rendered in neon, suggesting it is a state that becomes activated but also delicately fragile.

There is so much more to be said about this show, but you’ll have to read it for yourself at MODA.