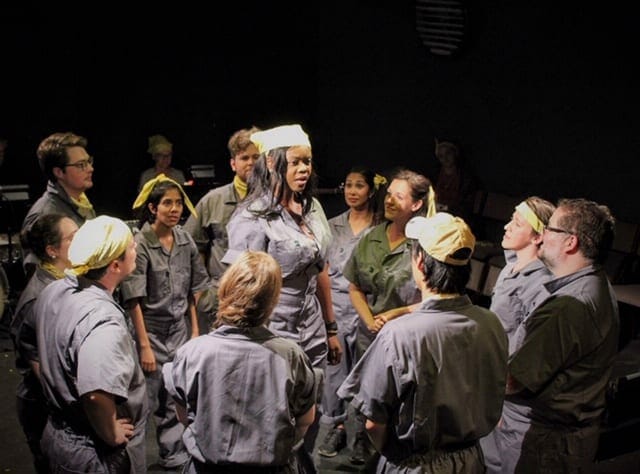 Inspired by Studs Terkel’s 1974 book of interviews with American laborers, the musical Working alternates between monologues and songs to create a picture of the working class. The Out of Box production, which runs until June 22, showcases the lives and hardships of 26 different people as they work to make a living.

Despite its relatable subject matter, the original production on Broadway, which opened in 1978, only ran for 24 performances. This likely stems from the structure of the musical, which sacrifices character development in order to showcase as many professions as possible. There are no main characters here but instead a constant stream of different types of people all searching for meaning beyond their jobs.

The opening number features the entire cast as they each get ready for their days at work. The cast is bright and cheery as they move across the stage, taking advantage of the intimate space by making eye contact and interacting with the audience. Vocally, the company is impeccable. Led by music director Annie Cook, the harmonies and strength of sound from the full cast give a strong start to the show.

However, the full cast onstage also immediately brings to attention the weakness of the staging. Not only did the Out of Box stage struggle to hold all 12 actors at one time, but set designers Kristin Storla and Carolyn Choe, who double as the director and artistic director respectively, also chose to put the audience in front of an alley stage. This creates a distancing effect that not only contradicts the intimacy of the performance space but also of the piece itself. The actors perform without mics, so when they turn to face one side of the room, the audience on the other side cannot hear the story. With only one song or monologue available to tell each character’s story, the actors have to compensate with extra projection and diction.

During the bigger numbers in Working, the staging requires the ensemble to be between the audience and the lead singer, occasionally blocking view of the actor and muffling the lead vocals. Storla and Choe attempted to fix this problem by creating a moving platform that could bring levels into the space.

While levels are always welcome, this platform piece is too distracting. It is tricky to move and requires two actors to constantly kneel down to lock and unlock the wheel breaks. At one point, two actors are forced to squat practically in the laps of audience members as they visibly struggle to move the platform holding three singing actors. The singers’ tense body language made me fear for their safety and distracted from the story.

Despite the problems created by the scenic design, the characters are still compelling because of the actors’ devotion to showing the person behind the title. Each song and monologue communicates an overarching search for meaning and wanting a legacy to pass along to one’s children.

The musical ends with a song called “Something to Point To,” which speaks to the efforts of these working-class individuals in making other people’s lives better. It reminds us to think of people like the bricklayer and steel worker when we have a roof over our heads. It reminds us to be kind to service workers and school teachers. Most of all, the musical reminds us to bring joy to our work and turn even the most mundane moments into opportunities to make someone else’s world brighter.

While not without flaws, the passionate and heartfelt performance by the cast of Out of Box’s production of Working leaves audiences feeling upbeat and inspired.