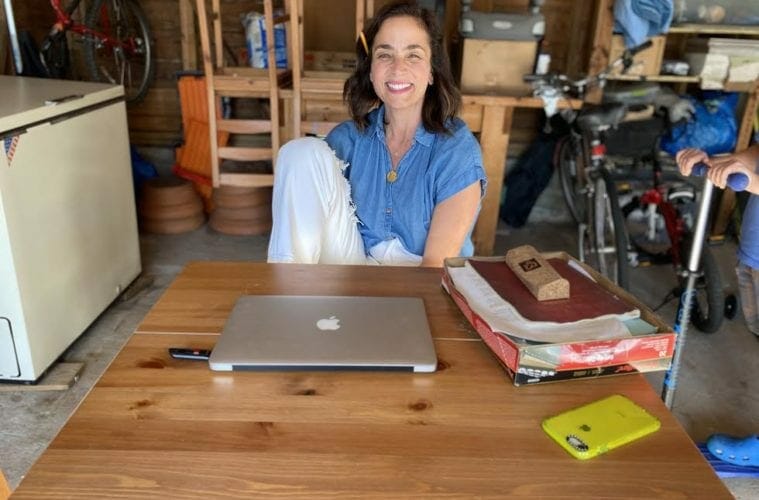 Zoe Fishman turned her garage into a playroom for her sons, then began to use it herself to find moments of solitude to work on her upcoming novel. (Courtesy of Fishman)

If critically acclaimed author Zoe Fishman had a theme song, she says it would be “Work,” Gang Starr’s hip-hop anthem: “Aiyo, I’m gonna be on ti-dop, that’s all my eyes can see / Victory is mine, yeah surprisingly / I’ve been laying, waiting for your next mistake / I put in work and watch my status escalate.”

She logged 13 years in publishing for Random House and Simon & Schuster before repping writers at two boutique literary agencies in New York. After relocating to Atlanta in 2011, she became executive director of the Decatur Writers Studio, and was an instructor and visiting writer at SCAD. She labored over her debut novel, Balancing Acts (Harper Perennial, 365 pages), while pregnant with her first son. She finished her most recent book, Invisible As Air (William Morrow Paperbacks, 401 pages), within months of her father’s passing in 2019. And following the sudden death of her husband, Ronen, four years ago, she reckoned with the irreconcilable grief by penning an essay for The New York Times’ Modern Love column.

“After Ronen died, my girlfriends knew what to do,” Fishman says. “They didn’t ask. They just mobilized like women do, willfully and happily, and took care of me, Ari [then 5] and Lev [then 2] for an entire year.” Fishman’s parents and brother moved to Atlanta from Alabama and Texas, respectively. Her mother-in-law and sisters-in-law organized outings for the boys, scheduling meal trains or simply sitting with Fishman to laugh or cry over a glass of wine  before she’d invariably collapse from exhaustion around 9 p.m.

“I never stop hustling,” says Fishman, who describes her writing as cathartic and essential to her soul.

Then came the pandemic, which brought massive changes to her writing routine. Pre-coronavirus, she required absolute silence and a minimum of visual clutter in order to work. Her sweet spot was the desk in her bedroom with its view of a tree-lined Decatur street. The only ambient noise was birdsong. When the pandemic hit, her entire support system was obliterated by social-distancing protocols and kids who were always home and attending class via Zoom. The serenity she craved was shattered. And her hustle shifted into overdrive. 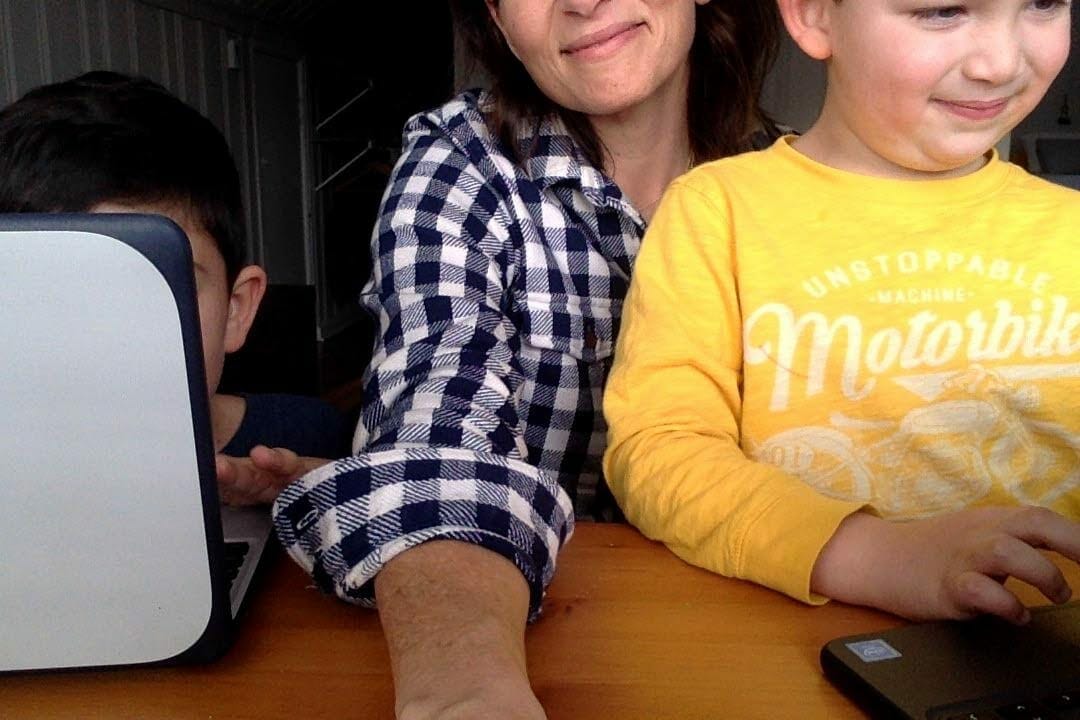 Zoe Fishman with her sons, 9-year-old Ari (left) and 5-year-old Lev. As the pandemic wore on, she had to tell them when she was going to work and that they should “leave her alone.”

Fishman was in the process of beginning her sixth novel, The Book Tour — a thinly veiled account of her own book tour in 2019 — when she was forced to put writing on the back burner for, what she thought, would be a few weeks. “I refused to even try to write at the start of the pandemic with the dudes around,” she says. “I probably could have, but this house is our house, and they have full access to me when they’re awake. They know they can scream my name incessantly . . . which they do.”

Early on, Fishman kept the dudes in constant motion to mitigate bouts of cabin fever and turf warfare. She ordered a trampoline, which is still MIA one year later. (Last summer, the online retailer said it was “stuck in transit, somewhere in the middle of the Pacific Ocean.”) She created a series of outdoor gardening and home-improvement projects that yielded all the benefits of exercise without drawing attention to the loss of access to playgrounds, playdates and team sports.

In anticipation of cooler weather last fall, she organized and repurposed her garage as an indoor play space. But when school did not resume in September — and Fishman’s brother and mother started alternating two-hour shifts to help the boys with Zoom school — the would-be little-man cave started looking like the perfect home office for Mama Bear. So Fishman co-opted a corner and got busy.

She’s found her sweet spot at the Ikea table that doubles as a writing desk. A self-described clean freak, she’s learned to relax her standards and block out the deep freezer, tools, bikes, scooters, skateboards and other “crap that can’t fit inside the house” in her sightline. Thanks to a patchy Wi-Fi connection in the garage, the time suck of text messages, emails and social media has been eliminated. And hindsight has shifted her perspective. 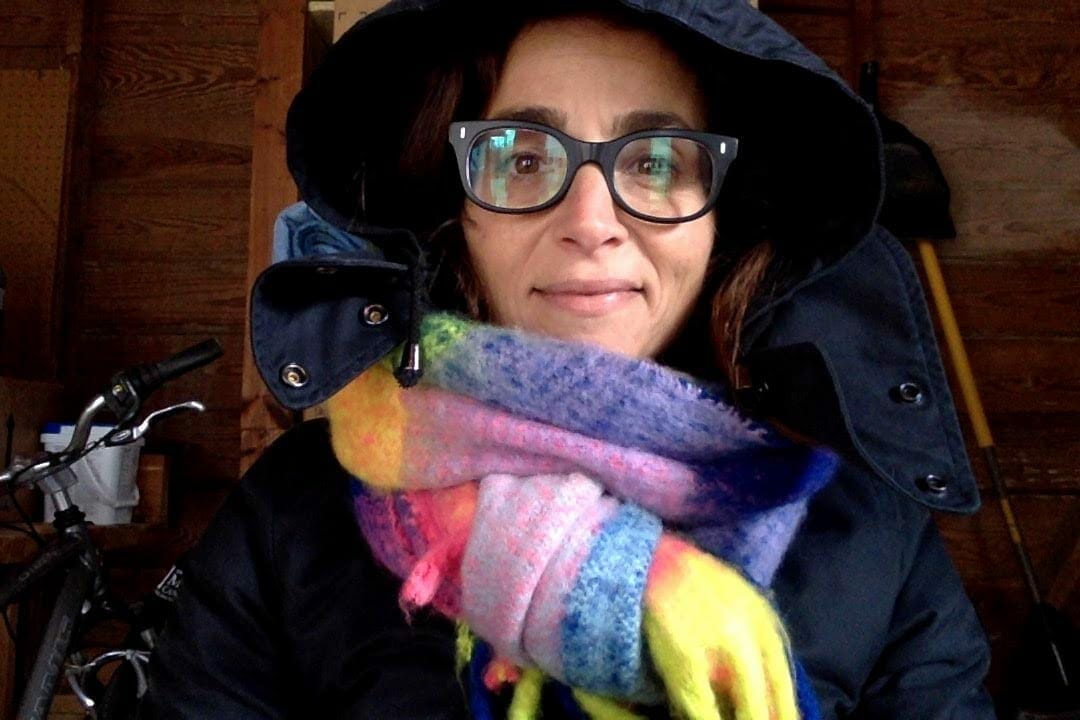 Zoe Fishman’s COVID-era writing space is unheated, which presents its own set of challenges.

The irony of her hyper-productivity in the face of adversity is not lost on Fishman. Just knowing she has two-hour intervals to write has made her more cognizant of time and inspired a deeper focus. She jokes that her martyrdom is unparalleled, and that she needs to be exhausted and completely beaten down to do her best work. But she turns serious when considering the survival instinct that has sustained her in ways she never could have imagined.

“I’m just now looking back on 2017 and asking myself how I gassed through after Ronen died,” says Fishman, as she starts to cry. “I didn’t honor the pain back then because I was too busy trying to keep these guys alive. I was in a really dark place where I didn’t believe in God and didn’t believe the soul went on forever. But now I know that’s not true. Now I see Ronen’s grace, his patience, his love for life in our boys every day. And it is stunning to me.”

Of course, there have been rough spots. Fishman has powered through cycles of what she calls co-polar depression — depression exacerbated by the stressors of coping with COVID-19 in relative isolation. She and the boys have lost their tempers with one another. And they sometimes wonder how they’ll get through the day without killing each other.

On the bright side, she says it feels good to have her boys witness the power of family and friends. She hopes their takeaway will be that it’s OK to ask for help, and how to back up the favor with a lot of hard work. She’s proud of how Ari and Lev have acclimated to the fact that, once in a while, they are not the center of their mother’s universe, all while having a front-row seat on what creativity and focus looks like.

Fishman completed her first draft of The Book Tour and is now working on revisions suggested by her editor. Before she finished, she added a new character — a babysitter who bears an uncanny resemblance to her father, whom she credits with instilling her work ethic before she was old enough to read. And that character has become an unexpected portal to what she calls unparalleled joy.

“One of the great gifts of writing is that you can write people back to life,” she says. “People who aren’t here physically anymore will show up every single day if you let them. And that’s kind of amazing.”