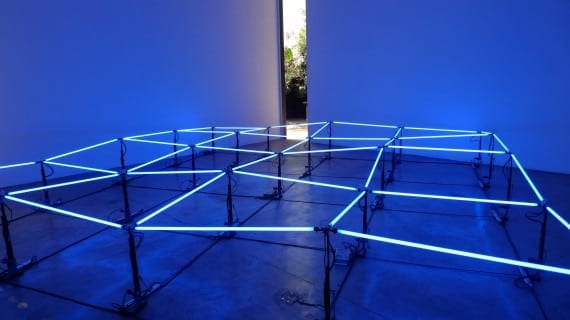 “Noplaceness” goes to Brazil for its first international book launch

On a balmy March night, the panel discussion of “Noplaceness: Art in a Post-Urban Landscape” at Paço das Artes in São Paulo was interrupted when the cord of the microphone knocked over a glass of water. Someone graciously remarked later that the mishap improved the situation, because Brazilians dislike flawless events. Like a champagne bottle broken on a prow, the spilt water helped launch the inaugural volume of the Atlanta Art Now series in its first international venue. During a four-day visit, “Noplaceness” publisher Louis Corrigan and its authors Cinqué Hicks and ourselves spoke to a graduate seminar at the University of São Paulo as well as at the aforementioned arts center.

The discussion centered on the 40-some Atlanta artists in the book whose work responds in various ways to the concept of noplaceness, an urban condition of which architectural theorist Rem Koolhaas deemed Atlanta the exemplar as far back as the 1980s. It is characterized by dispersed centers of community separated by stretches of anonymous space that could, literally, be anywhere. These nodes function semi-independently: there are people living in towns and neighborhoods within 20 miles of downtown Atlanta who have never found reason to visit most of the city’s neighborhoods, and vice versa. Thanks to the Internet, the whole world is potentially closer to most of us than, say, Alpharetta is to East Point or Marietta to Peachtree City.

This condition of virtual or physical places embedded in a general noplaceness is not at all unique to Atlanta. São Paulo, one of the world’s fast-expanding mega-cities, is no stranger to noplaceness, as noted by Hugo Fortes, an artist and professor at the university, in “Between Genius Loci and Noplaceness: Atlanta and the Landscape of Contemporary Life,” an essay he wrote in response to the book.

Fortes, who spoke in Atlanta in February as part of Atlanta Art Now’s “Global Now” exchange, served as host during our trip, which included informal visits with artists as well as tours of arts centers and galleries. Just as Fortes had been surprised by the spatial experience of the real (as opposed to virtual) Atlanta — specifically the quantity of open space, single-family homes and general horizontality — we discovered that what guidebook photos had conveyed as an endless expanse of alienating skyscrapers was actually a configuration of high-rise ganglia connected by diverse neighborhoods (whose distinct resemblance to comparable districts in Miami suggests that mid-20th-century U.S. landscapers and architects took cues from Brazil). More alienating were the walls and fences that hid (and protected) many residences, particularly in wealthy neighborhoods, and gave streets a certain blankness. Another view of São Paulo, greener than we imagined. Its version of OTP figures in the distance.

Like Atlanta, São Paulo is a car-oriented city. It even has its own version of OTP: the famed Paulista skyscrapers of the city center have been supplanted as centers of economic power by the glitzier new financial districts along the river, a physical distance reinforced by the sheer difficulty of fighting frequently clogged traffic. Like Atlantans, citizens of São Paulo seldom venture outside their own corner of the megalopolis.

Although a handful of art galleries cluster in relative proximity in the appropriate neighborhoods (whether upscale or funkily trendy), a glance at the map reveals a geographic dispersion that does not encourage a sense of a single arts community. Networks of shared interest do seem to develop across distances, but a four-day visit could give only a small, intriguing glimpse of such things as artist-patron interactions. On the other hand, ample governmental and corporate funding has made possible some spectacular interaction between the art world and the general public. The several SESC (Social Service of Commerce) arts centers, which were extolled recently in The New York Times, provide not only ad hoc exhibition space and community classes, but street-friendly gathering places — restaurants and bookshops — and recreational sports facilities. The 30-year-old Centro Cultural São Paulo is similarly open to casual visits, combining gallery space with a public library and open-air cafe tables arranged around a century-old garden. Strategically placed in areas with pedestrian traffic and an active street life, these sites make the world of art a part of the daily routine.

Some members of the citizenry have made art a part of daily life in a different way. Not only are many of the ubiquitous graffiti a conscious political act, but the famously sloped surfaces of Oscar Niemeyer’s architecture in Ibirapuera Park have been turned into an improvised playground by children and adolescents who run up the sides of the dome-shaped Oca exhibition center, transforming the building into a gigantic slide. A work in the Jose Damesceno retrospective at Centro Cultural.

The small sampling of art that we saw had a conceptual bent. José Damasceno’s retrospective at the Centro Cultural evinced what Brazilian critic Agnaldo Farias has described as “good humor combined with a sense of estrangement.” Sculptures fashioned from materials high and low included a stone wall that snaked over a table and two chairs — barrier? connection? — and a floor piece that looked like the empty guitar case for an octopus-like instrument. Also at Centro Cultural, sculptor Erika Verzutti‘s playfully surreal mutant fruits and vegetables reflected a similar quirkiness. Hugo Fortes (second from left) discusses an Erika Verzutti sculpture with the authors of "Noplaceness."

Fortes explained their roots in the Neo-Concretist artists of the 1950s, who challenged the hegemony of abstraction with antimonumentality, unusual materials and expressivity. These artists, among them Lygia Pape, Hélio Oiticica and Lygia Clark, worked in a variety of media — performance, film, sculpture and drawing — a practice that we observed among contemporary artists as well. Gisela Motta and Leandro Lima, an artist couple exhibiting at Gallery Vermelho, showed work ranging from text pieces written as if they were “captcha” codes, an installation of kinetic neon tubes suggesting ocean waves (see image on home page) and a pair of videos in which a man and woman in opposing screens reached out to touch, or more likely strike, the other. Thanks to infrared photography, their hands left imprints on each other’s faces.

A still from Gisela Motta’s and Leandro Lima’s video “Calar.”

Fortes was surprised by the preoccupation with race and identity among the artists in the book, and Brazilian audiences did not connect at all with the prevalence of apocalyptic themes. With their economy thriving and the World Cup and the Olympics on the horizon, they seemed to feel that their country is in ascendance and did not relate to Americans’ sense of vulnerability — except as schadenfreude.

Many Brazilians apparently feel that, after decades of Brazil’s being declared the country of the future, the future has finally arrived. However, conversation with São Paulo artists also revealed that a slightly older generation is amply aware that William Gibson’s maxim about the future is as true in São Paulo as in Atlanta: the future is already here, but it is (very) unevenly distributed.

Our experience demonstrated that face-to-face dialogues still occupy a distinct and important place in the era of noplaceness. This was, almost from the beginning, one of the points that the form of the “Noplaceness” launches was intended to make. The combination of the book as physical object, translations in Brazilian Portuguese and Chinese, and the symposium as a point of personal contact can establish a dynamic that the digital realm alone cannot.

The real-world encounters that ensue can have real-world results. For example, Fortes will include Joe Peragine, whom he met while in Atlanta, in an exhibition of video art he is curating. Since one of the book’s several hypotheses is that artistic interventions in the empty spaces of noplaceness can change things, this might be taken as a small but suggestively hope-creating validation of the theories behind the project.