Review: Harrison Keys’ “Pressure Luck” at Get This! Gallery

Remember when your mother’s favored advice for how to get along in the world was to be yourself? As an adolescent, you may have dismissed the advice as trite and unprofitable, but mercifully, social pressures shifted as you moved through life.

The time came when you grew comfortable in your own skin: you weren’t aspiring to some impossible loftiness, but came to accept your unique strengths and weakness. No longer fretting over or raging against the complexities of currying favor with everyone, you saw the value in being liked for yourself.

“Pressure Luck,” Harrison Keys’ latest work on view at Get This! Gallery, is unabashedly comfortable with itself. Wedding unaffected imagery with text, the series is neither particularly weighty nor challenging — and it’s OK with that. 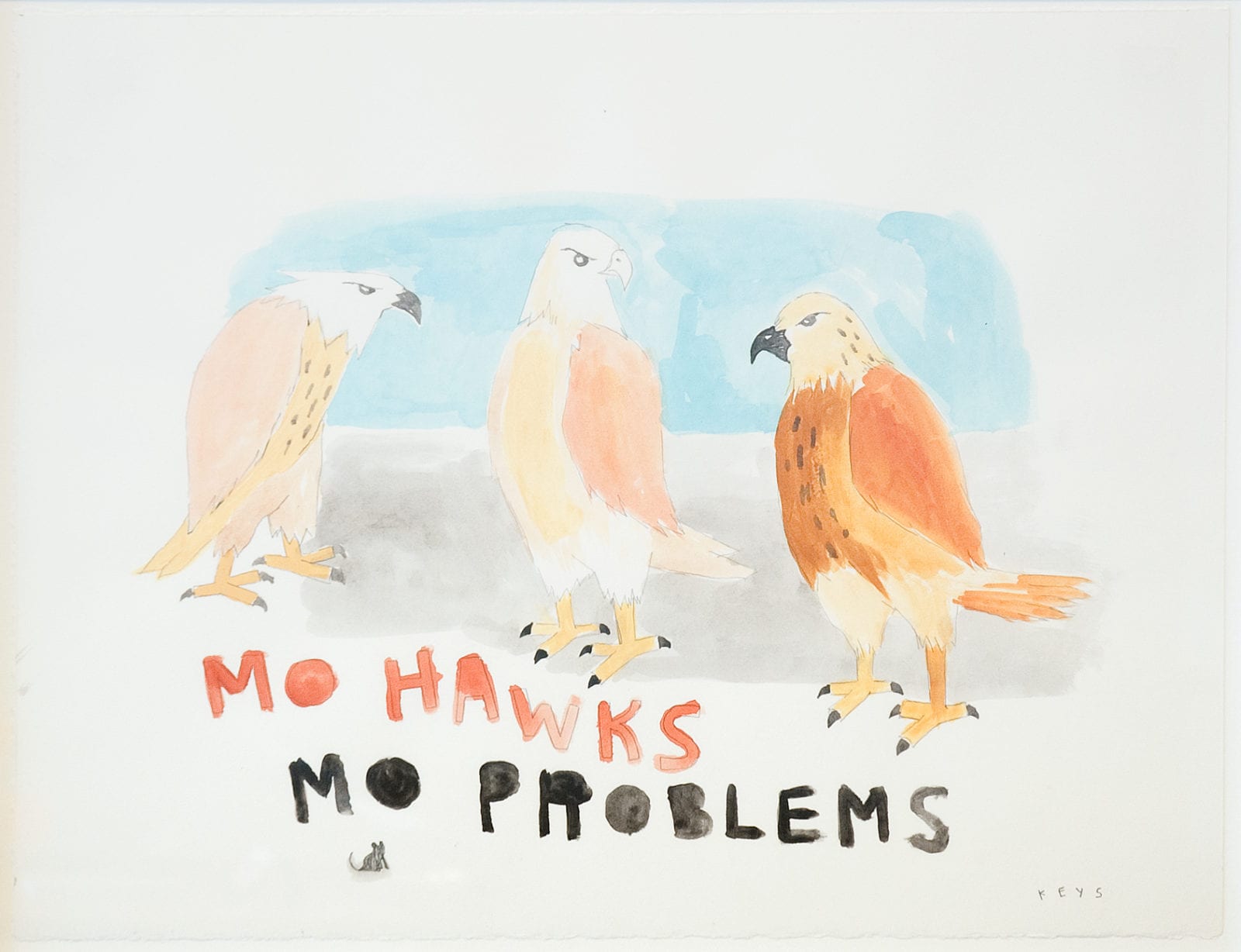 In “Pressure Luck,” Keys limits his airy, sorbet-hued palette to watercolor illustrations of animals and humans in curious contexts. Loosely recalling children’s book illustrations of the 1960s and ’70s — the work of illustrators Alice Provensen and Mary Blair comes to mind — Keys’ work is at least as much about words as the subjects he portrays. Therein lies evidence that he is untroubled by how others judge him: he reliably indulges in that ignoble textual conceit that Dryden once deemed the “lowest and most groveling kind of wit”: the pun.

Attentive readers may notice that “Pressure Luck” is itself a play on the phrase “press your luck.” With a background in graffiti, Keys has long incorporated text within his images. For this artist, text is not merely a proving ground for formalist exploration but an opportunity for wordplay. Take, for instance, the crudely pink figure gesturing to his rampant male anatomy, attended by a text balloon reading, “PULL IT SURPRISE.” Sound it out and you’ll find the reference to the literary prize that the image itself makes little hint of.

Like puns themselves, however, this series can induce more groans than delight. Stretching the limits of comic credibility is “Mail Patterned Baldness,” in which a postal truck makes its regular delivery. “Mo Hawks” features a trio of birds from the Accipitridae family. It’s all a bit silly: Keys’ script reading “MO HAWKS / MO PROBLEMS” gives a nod to the late rapper the Notorious B.I.G., who is presented as a raptor joined by, presumably, the avian incarnations of Ma$e and Sean Combs. 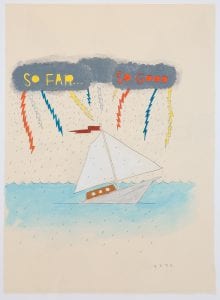 More successful are the paintings that favor ambiguity over farce. In “So Far So Good,” kindergarten-esque waves engulf a sinking single-mast boat whose obstinately optimistic flag ripples under dark clouds. Underlying the childlike maritime tragedy is a quietly sophisticated understanding of composition, drawn by a clear and highly self-assured hand.

Keys slips moments into his images which, like puns, incorporate a dual operation. In “78-10,” the rotund mascot of Kool-Aid is teamed with a gray skull as “Oh Yeah” and “Oh No” hover textually above. What initially appears to be a pop culture reference turns out to be a memorial to the recently deceased Atlanta graffiti artist known as Oh No.

Other images are more mysterious. What, for example, are we to make of the handsomely mustachioed lion whose raised brow meets our gaze in “Stranger Things?” Is that textile on his back a clever reference to Iranian gabba-ye širi, with Keys’ lion wearing the carpet instead of the other way around?

What about the black bat flapping its wings, titled “Triple-Double?” Is Keys referring to the two and three protrusions on its appendages, or is the image actually a baseball pun? Could it be that the swollen-eyed bull in “Dad Joke” is a sly reference to Picasso?

The artist plays on puns and known jokes just often enough that, once we’re aware they exist, we begin to look for them everywhere. It ultimately becomes an exercise in frustration and delight. The trouble with personal intertextuality is that it occasionally renders the work impenetrable. Sometimes we’re left wondering if it’s even there at all.

But this work is too busy being itself to be troubled by these quibbles. Keys’ last show at Get This! was an audacious, paint-outside-the-lines assault in which bold hues zigged energetically across the gallery walls, creating a backdrop for his full-bleed festivals of color. The quieter context of “Pressure Luck” equally reflects the artist’s maturing, restrained style.

Just right for summer, this work is visually light and easily likable. Not burdened by outsized aspirations, Harrison Keys’ modest marriages of text and illustration presume neither the cerebral challenges of Raymond Pettibon nor the clever politics of Glenn Ligon. But then, they aren’t trying to.

Could Keys push himself further? Certainly. But one gets the sense that, should he choose to do so, it will happen on its own terms. Mom would be proud.