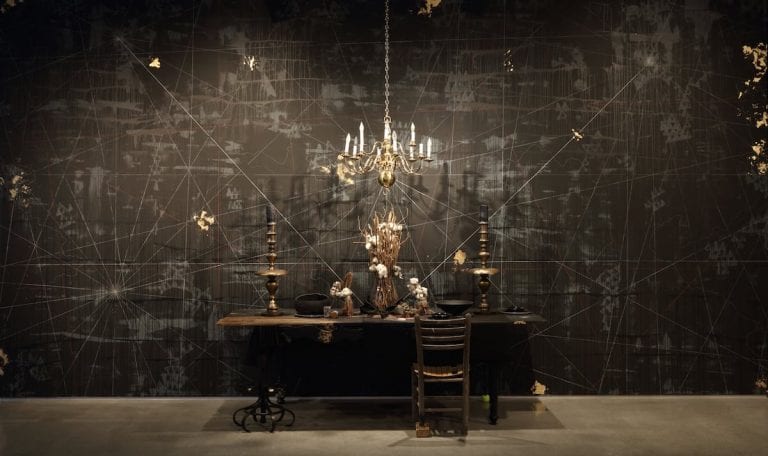 Atlanta artist Michi Meko's 2017 work Studying the Silences: we used to eat this back home. Meko is one of the finalists for the 2019 Hudgens Prize. (Image courtesy Zuckerman Museum of Art)

The Atlanta artists were chosen by a panel made up of Anthony Elms, chief curator of the Institute of Contemporary Art in Philadelphia; artist Adam McEwen; and Teresa Bramlette Reeves, director of curatorial affairs at the Zuckerman Museum of Art in Atlanta.

“I am really pleased and excited about the list of five finalists as it represents a strong sampling of the breadth of work being produced by artists in Atlanta,” says Reeves of the jurying process. “It is a bit of an irreverent list too, satisfyingly open.”

This is Artadia’s fifth time presenting curator-driven, unrestricted awards to Atlanta artists. The 2017 Atlanta Artadia Awards were open to all visual artists living in Greater Atlanta for over two years, working in any media and at any stage of their career. Finalists and Artadia Award recipients are selected through Artadia’s two-tier jury review process.

In the first round of review, jurors evaluated the merit of all submissions and collaboratively determined the five finalists. The finalists will receive studio visits with the second-round jurors, who will ultimately select two artists as Awardees to receive $10,000 in unrestricted funds. Awardees are invited to participate in Artadia’s ongoing Beneficiary program, connecting them to a network of curators and collectors across the country and advancing their careers.

Artadia is a national nonprofit organization that supports artists with unrestricted, merit-based awards followed by a lifetime of program opportunities. Artadia is unique in that it allows any artist to apply, engages nationally recognized curators to review work and culminates in direct grants. Since 1999, Artadia has awarded over $3 million to more than 300 artists in Atlanta, Boston, Chicago, Houston, Los Angeles, New York and San Francisco.

Artadia released the following bios of the selected finalists:

At his Mechanical Riverfront Kingdom on Druid Hill, Clark Ashton confronts life’s inherent cruelty and unfairness by asserting truth and establishing history with an assuming permanence that challenges existing power structures. He engages issues both urgent and timeless with a keen sense of craft and a vision driven by independent thought. He constructs cosmologies and interacts with the public in an environment removed from the setting of sponsored spaces where power and politics censor expression and control agendas in insidious ways.

In 2015, Michi Meko almost drowned. Inviting this life changing event’s influence into his studio practice, recent works focus on the Black experience of navigating public spaces while remaining buoyant within them. African Americans in public space are consistently threatened, visibly and openly with the evidence sharing offered by social media. Barrages of images simulate an experience of drowning.

The work incorporates the visual language of naval flags and nautical way findings and romanticized objects of the American South to communicate the psychological and the physical. Beyond the physical image of the body, objects become metaphors for self-hood and resilience.

Masud Ashley Olufani’s work blends formal elegance, emotional integrity and spiritual resonance. His thematic concerns include issues such as race, social stratification, history and memory. The oral traditions of the Deep South and West Africa weave a consistent narrative thread throughout his work expressed by the juxtaposition of disparate materials charged with psychological, historical and sociological implications as well as the implementation of new media — audio recordings and video — to articulate a conceptual idea. Olufani’s commitment to process reflects his conviction that the maker imbues the object with spirit through physical labor, fueled by vision and creativity.

The Inner City Urban: Vine City is a continuous photographic declaration of the significance for the lives of Black Americans amidst the loss of historic Black neighborhoods. This body of work highlights the common misperception of African Americans narrated by the media. It brings awareness to the current state of a low-income neighborhood on the verge of gentrification, over-revitalization and restoration in Atlanta, GA. The works draw attention to the truth and authenticity of the people and their reality, what they look like, where they live and how they act.

Tori Tinsley’s work explores her changing relationship with her mother as she succumbs to a degenerative brain disease. Through the interaction of two figures, she conveys the challenging emotional experience of such an ambiguous loss, feelings that include despair, longing, disbelief and even hope. These works not only serve as premature memorials to her mother, but they also stand as monuments to resilience and highlight how painting can serve as a proxy for reconnection.