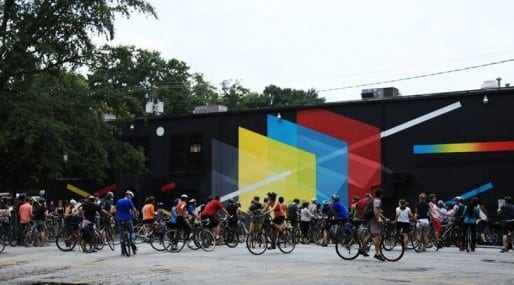 A stop on annual bicycle tour of Living Walls murals.

Street artists, lawyers and religious leaders crammed into City Hall Monday for a sprawling debate on the regulation of public murals on private property.

Speakers quoted from the Bible, the Constitution, and even Aretha Franklin’s “Respect.” Yet after several hours, there was little agreement on how the city should regulate street art, or even whether the art form should be legislated at all.

After the public presented impassioned arguments for and against stricter rules on murals, council members voted against passing a controversial new ordinance that was set to become law after receiving unanimous approval last week from the council’s Community Development and Human Resources Committee. Instead, the council sent the law back to committee and introduced two separate proposals to set up a study group of experts to examine mural permitting across the country and establish a new Arts and Culture Advisory Council for the city.

Over the last two years, there have been fraught conversations — mostly in underprivileged neighborhoods of south Atlanta — about how to balance public art in local communities. Those who supported new legislation argued that the council needs to clarify its existing permitting process and offer communities more input in what goes up on walls across the city. Many artists, however, voiced concern that the new ordinance would add unnecessary layers of bureaucracy and restrict artistic expression.

Yet the debate was not a straightforward battle of artists versus residents. In some cases, neighbors disagreed with fellow neighbors.

“It’s an issue of respect,” said Ron Shakir, an African American community activist from southwest Atlanta. “For you to come into these communities and you call yourselves artists and you don’t come to the meetings . . . And yet you call those elected officials . . . you call them the N- word.”

“How dare you!” a white resident of southwest Atlanta burst out, disputing his charges of racism. “I’ve lived in the community for 15 years. How dare you!”

Inevitably, much of the discussion focused on community reaction to a pair of surreal works sponsored by the nonprofit mural group Living Walls in 2012.

“It’s not that we in the Pittsburgh community are against the art,” said the Rev. Bobby Williams of the Community Ministry Church in southwest Atlanta, who whitewashed a mural by Pierre Roti in 2012. He objected to the artwork, which featured a male torso with an alligator head and a serpentine tail, not only because he believed it depicted Satan, but because artists had not presented a proposal to his neighborhood planning unit (NPU).

“Art and culture is something we all enjoy, but lewdness and obscenity is something that we cannot afford,” said Tajiddin Muwwakkil, imam at Masjid Al-Quran, who opposed a local mural by Argentinian artist Hyuro, which showed a nude woman grow fur and shed her coat, which morphed into a wolf. It, too, was whitewashed in 2012 after the Chosewood Park neighborhood association voted against it. “It has to be democratic process. Everyone has to have a voice.” Hyuro’s mural in Chosewood Park was covered over.

Some street artists struck a conciliatory tone as they spoke against the legislation. “Mistakes were made, and dialogue with the community must be given priority,” said Peter Ferrari, a professional street artist who runs Forward Warrior in Cabbagetown and has worked on several murals across the city. He wore gray to the meeting, as a symbol of “what we fear Atlanta will turn into if this legislation passes.”

Other muralists rejected the need for any regulation of public art. Ashley Anderson, who has worked with Forward Warrior and Living Walls, told the city council the legislation was wrong-headed and over-complicated.

“Who in their right minds would slow the generation of beauty under a banner of policy and procedure?” he asked the council. “Given the history of nonenforcement, why would I bother getting permission from anyone other than the property owner of the wall I’m working on?”

The issue of public voice in art on private property is complicated. Legally, constitutional expert Gerald Weber said, individuals have a right to express even controversial views on private property — whether or not the property is in public view. Weber warned the council that St. Louis’ sign ordinance was deemed unconstitutional in 2011 after the city ordered a private property owner to remove a mural that protested eminent domain. While that city argued the artwork was too large and located in the wrong place, a federal appeals court ruled that the city wrongly based its decision on a sign’s content, rather than on clear and objective standards.

“No other city in the country, as far as we have discovered, requires its city council to consider and without standards approve or veto every mural on nonresidential private property,” Weber told the council.

Whatever the legal outcome, some arts advocates argue that debates about public art need to span out beyond the law. As street art groups increasingly promote their work as a boon that uplifts neighborhoods and spurs economic revitalization, should they be more open to considering the public?

Anne Archer Dennington, executive director of Flux Projects, a nonprofit that stages temporary public art installations across the city, told ArtsATL the legislation did not seem to present too onerous a burden on artists. When installing public art, arts organizations should consider those who live with the work, not by having the community weigh in on the selection of artwork, but by working to choose artists that might be a good fit. “If a neighborhood or an NPU said no to us, we wouldn’t go for it,” Dennington said. “I do get that officially you can do a project without getting a community vote of approval, but we’ve never operated as if you can. If you live in the city, just because its private property, doesn’t mean it’s a free-for-all.”

Toward the end of Monday’s meeting, the city council voted 14 to 1 to refer the mural legislation back to committee, with council member Cleta Winslow, who represents the Pittsburgh community, the sole dissenting voice.

“It’s all about process,” said Winslow. “It’s not about naked women and pubic hair . . . It doesn’t seem as people want to follow the process, even with the council. Will they have good faith to do what they’re supposed to do . . . and bring artwork to us for approval in the meantime?”

Over the years, few artists have followed Atlanta’s present law, which requires artists submit a permit application including an artist’s statement, a graphic of the proposed mural, a copy of the artist’s resume and a statement signed by the property owner to the city’s Office of Cultural Affairs, the Office of Transportation and the Urban Design Commission. Even since the 2012 controversies, Winslow said, many muralists continue to ignore city government and put up murals without official approval.

The latest proposed ordinance, spearheaded by council member Joyce Sheperd, would have the Office of Cultural Affairs shepherd the application to other city departments before placing the application on the agenda of the relevant NPU. While the current law recommends artists present their ideas to their NPU, the updated legislation requires they attend an NPU meeting to notify the community. Residents, however, would not have the power to veto a mural. Final approval would rest with the city council, even if it is not clear what standards it would use.

After hearing from lawyers and the public, Sheperd said she was persuaded to allow more time to review her legislation. Rather than rehash the issue with another public work session full of “screaming and hollering,” she proposed setting up a short-term study group, made up of art and legal experts, to explore street art policies around the country. Council member Natalyn Archibong also presented a separate ordinance that would set up an Arts and Culture Advisory Council, made up of nine citizen volunteers, to advise the city on artistic and cultural affairs and strive for high standards of quality in the arts. The board would take responsibility for developing a multiyear cultural plan for the city and seeking financial support for the arts.