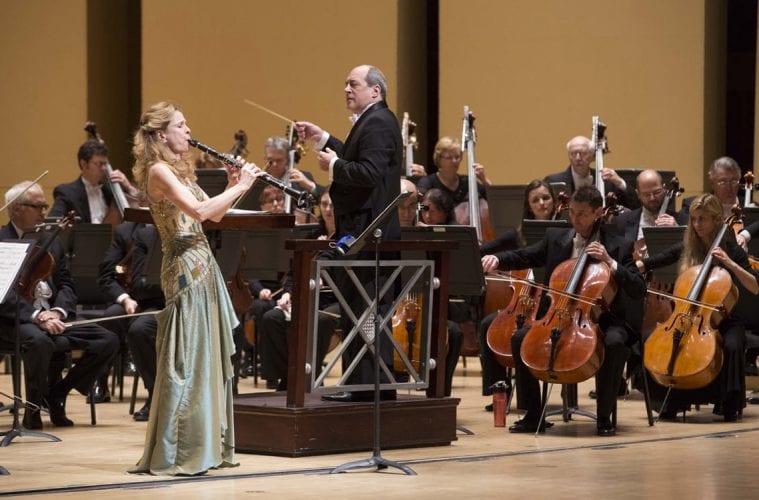 The Atlanta Symphony Orchestra will conclude its two-year celebration of the music of Ludwig van Beethoven and Leonard Bernstein and mark the centennial of the end of World War I in the upcoming 2018–19 season. The orchestra will also record an album commissioned by the ASO.

The upcoming season, announced today by the ASO, will include a one-night performance by acclaimed pianist Lang Lang in an all-Mozart program led by guest conductor Mei-Ann Chen, the former assistant conductor for the ASO. The orchestra will also include multiple performances that celebrate the musical cultures of Russia, Spain and France.

The announcement comes a week after the ASO announced a harmonious three-year contract extension with the Atlanta Symphony Orchestra Players’ Association that will continue through the 2020–21 season. Music director Robert Spano has also announced that he will step down at the end of that season.

The cornerstone will be the conclusion of the two-year “LB/LB” celebration of Beethoven and Bernstein. Spano says the “LB/LB” celebration of Beethoven and Bernstein is about legacy.

“Beethoven is perhaps the most iconic figure in classical music, while Bernstein is certainly an icon for classical music in America,” Spano said in a press release. “In planning these celebrations, it was important to highlight the legacies and artistic genius. With Bernstein, we also wanted to acknowledge his extraordinary legacy as a performer and interpreter, as well as his work as a composer. For many Americans, Bernstein’s larger-than-life presence was an access point to classical music of all periods.”

The Bernstein celebration will include his Broadway music and choral works, along with his concertos for cello and flute. Spano will conduct Shostakovich’s “Leningrad” Symphony in concerts that will open with Bernstein’s “Three Meditations from MASS.” “During the historic New York Philharmonic Tour of Russia in 1959, Bernstein welcomed Dmitri Shostakovich to the stage in Moscow after a performance of this symphony,” said Spano.

The orchestra will also perform Bernstein’s “Chichester Psalms” in tandem with Beethoven’s famed Ninth Symphony. “This program pays homage to Christmas 1989, when Bernstein went to old East Berlin shortly after the Berlin Wall started to fall and gave a historic concert of Beethoven’s Ninth with musicians from West and East Germany, France, England and the United States,” said Spano. “On that occasion, he asked the choirs to change one word in Schiller’s immortal text. Instead of ‘Freude’ or joy, he asked them to sing ‘Freiheit,’ freedom.”

Additional celebrations of Beethoven include Symphonies Five, Six and Eight, the Triple Concerto, the Third Leonore Overture, as well as a complete performance of “Fidelio,” featuring the ASO Chorus and a cast of internationally acclaimed vocalists. Jonathan Biss will also perform the four remaining intimate recitals in the complete cycle of all 32 of Beethoven’s piano sonatas.

“The 2017–18 season, the first year of the ‘LB/LB’ celebration, has been a tremendous success with incredible sold-out performances and the orchestra performing at the highest levels to the delight of our audiences,” said Jennifer Barlament, executive director of the Atlanta Symphony Orchestra. “We look forward to continuing this celebration and building on the exciting momentum in the upcoming season.” Principal guest conductor Donald Runnicles will lead the ASO in one of its all-French programs.

To honor the 100th anniversary of the end of World War I, the season will feature some of music’s most eloquent responses to war, including Shostakovich’s “Leningrad” Symphony, Bernstein’s “Halil,” Elgar’s Cello Concerto and Benjamin Britten’s “War Requiem.” Britten’s piece includes poetry written by World War I poet Wilfred Owen. “This piece has become one of the most powerful musical works ever written against war, any war,” said Evans Mirageas, ASO vice president of artistic planning.

This season will also celebrate different musical cultures, with multiple programs devoted to one country. There will be two all-Russian programs (both led by Spano), three all-French programs (one led by Donald Runnicles) and an all-Spanish program (featuring concertmaster David Coucheron).

The all-Russian programs include opening weekend (September 20, 22 and 23) with Spano leading the ASO in Tchaikovsky’s Symphony No. 5, and Rachmaninov’s Piano Concerto No. 2 featuring Kirill Gerstein. Guest conductor Edward Gardner makes his ASO debut on an all-Rachmaninov program (November 29 and December 1), featuring “Isle of the Dead,” “Symphonic Dances” and the Fourth Piano Concerto played by Simon Trpčeski.

The all-French programs include Jun Märkl conducting works from Berlioz and Ravel, as well as Vieuxtemps’ Fifth Violin Concerto played by Giora Schmidt on October 11 and 13. Lionel Bringuier will lead the ASO premiere of Prokofiev’s Symphony No. 4, Stravinsky’s “The Firebird Suite” and Lise de la Salle making her ASO debut with Ravel’s Piano Concerto in G on May 2 and 4. Runnicles returns for a program featuring works from French composers Milhaud, Canteloube and Debussy, including the ASO premiere of the Matthews orchestration of Debussy’s “Préludes,” May 23 and 25.

On March 7 and 9, the ASO will perform an all-Spanish program, featuring Ravel’s “Alborada del gracioso” and Falla’s “The Three-Cornered Hat” (complete ballet), and David Coucheron will perform Lalo’s “Symphonie epsagnole.”

As part of the ASO’s commitment to new music and the Atlanta School of Composers, the symphony will perform and record a collection of ASO commissions, past and present, to be released on ASO Media.

The season will introduce six new works into the Atlanta Symphony Orchestra repertoire, including an ASO commission and world premiere of Richard Prior’s Symphony No. 4. Other ASO premieres include Jennifer Higdon’s Viola Concerto performed by Roberto Díaz, Alex Turley’s “City of Ghosts,” Bernstein’s “Halil,“ Prokofiev’s Symphony No. 4 and the Colin Matthews orchestration of Debussy’s “Préludes.” The heralded ASO Chorus will be featured in four performances during 2018–19.

The Atlanta Symphony Orchestra Chorus will be featured in four concerts, including Britten’s “War Requiem,” Verdi’s “Four Sacred Pieces,” Beethoven’s Symphony No. 9 and “Fidelio.” The chorus will also be featured in the traditional holiday performance of Handel’s “Messiah.”