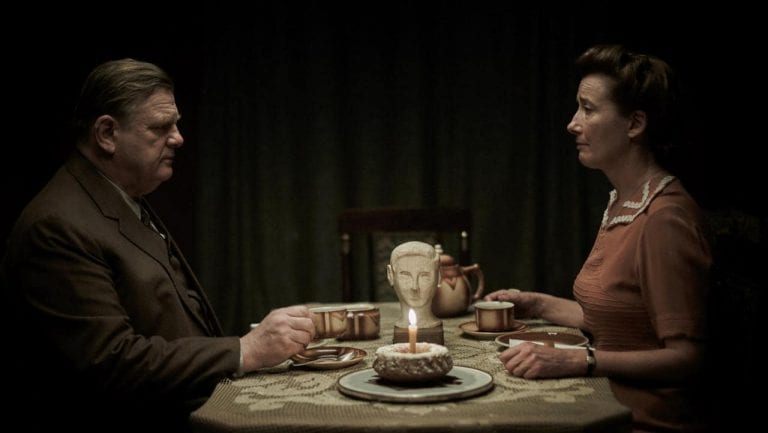 Brendan Gleeson and Emma Thompson in Alone in Berlin, which kicks off this year's Atlanta Jewish Film Festival.

Lasting 23 days with a record 202 screenings, the Atlanta Jewish Film Festival unveiled its complete list of titles today. The narrative features, documentaries, and shorts include 75 films from 24 countries, screened at seven venues around the metro area.

Atlanta’s largest film festival — and the largest Jewish film festival in the world — kicks off its 17th year on January 24, with tickets going on sale on January 18. The festival opens at the Cobb Energy Performing Arts Centre with Alone in Berlin, a drama directed by French actor Vincent Perez (Queen Margot). Based on Hans Fallada’s fact-based 1947 novel Every Man Dies Alone, the film stars Brendan Gleeson and Emma Thompson as a working-class German couple during World War II, compelled by the death of their soldier son to embark on a personal campaign of resistance against the Nazi regime.

This year’s line-up includes The Freedom to Marry, which documents the fight for gay marriage, while Norman Lear: Just Another Version of You is a critically-praised documentary on the legendary television producer of All In The Family. The festival will feature the North American premiere of the films The Children of Chance and Forever Pure.

The full lineup and schedule are listed on the festival website, and ArtsATL will have an in-depth preview later this month.

“We’ve made a lot of improvements this year, including access,” says executive director Kenny Blank. “We’re going to have a record capacity regarding the number of films, and we’ve re-engineered our seating capacity to maximize access to tickets.”

That’s a smart change since many screenings have sold out in the past. The festival’s 2017 venues include those from previous years: Cobb Energy Performing Arts Centre, Georgia Theatre Company Merchants Walk, United Artists Tara Cinemas 4, Lefont Sandy Springs, Regal Cinema Atlantic Station and the Woodruff Arts Center. The festival is also adding a venue this year, Regal Cinemas Perimeter Pointe 10.

Another change for 2017: Previously, films were not shown on Friday evenings or daytime Saturdays in deference to patrons observing the Shabbat. Now they will be.

“We recognize our place in the larger Atlanta community,” Blank says. “We’re programming for both the Jewish and the non-Jewish film lover, and we want to make screenings accessible at the most convenient times. And weekends, for many, are the best times to get away.”

All films shown during Shabbat will have at least one encore screening, and often multiple ones, at other times throughout the festival.

Another innovation is the creation of professional juries to award prizes at the end of the festival, in tandem with the traditional, audience-voted awards. The juries comprise filmmakers, journalists, and other professionals, and the categories include Features (both narrative and documentary), Emerging Filmmakers, Building Bridges, Human Rights and Shorts.

AJFF concludes February 15 with the Woodruff Arts Center screening of The Women’s Balcony. You could see this Israeli comedy-drama as a religious, non-sexual version of Lysistrata: the female members of a synagogue in Jerusalem stage a kind of strike against the men of their congregation when a new rabbi tries to impose sexist, conservative changes. It’s a lovely portrait of the ways a community can disagree, but still communicate and connect.

It might be a metaphor for the festival itself.

“What these films are about, to me, is connecting us with our humanity and connecting us to one another,” Blank says. “In the times we live in, the need for thoughtful dialogue and fostering understanding between diverse audiences is not only essential but more relevant than ever.”