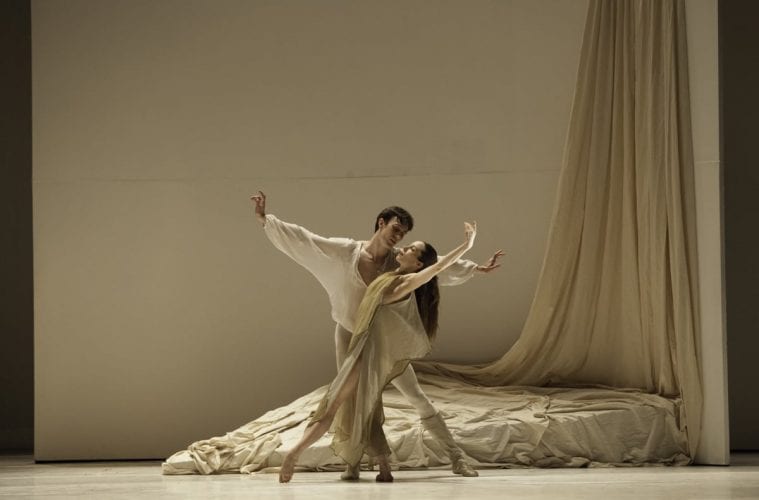 News: Atlanta Ballet announces 2014–15 season that pulls from the past and pushes ahead Alessa Rogers and Christian Clark had electric chemistry in this year’s production of Atlanta Ballet’s Roméo et Juliette, which will be reprised next season. (Photos by Charlie McCullers)

A sign saying, “Kilroy Was Here” may appear on billboards, flyers and Internet ads next March, when Atlanta Ballet presents Camino Real, a ballet adaptation of Tennessee Williams’ play and a world premiere by resident choreographer Helen Pickett.

It is part of an eclectic lineup announced today that features Atlanta premieres of Yuri Possokhov’s “Classical Symphony” and Alexander Ekman’s “Cacti.” The company will revive Ohad Naharin’s “Minus 16” from 2013 and will encore Alexei Ratmansky’s “Seven Sonatas” and Jean-Christophe Maillot’s Roméo et Juliette from this season.

Camino looks to be one of the lineup’s more interesting works. Atlanta audiences have responded to Pickett’s “Petal” and “Prayer of Touch” with enthusiasm, and Pickett’s third work for the company, “The Exiled,” will receive its premiere in May. Camino will be her first full-length work for Atlanta Ballet. It poses a significant challenge, but if Pickett succeeds, it is likely to make the up-and-coming choreographer more visible, sought-after and respected. Camino Real was a departure for Williams, whose earlier plays — A Streetcar Named Desire, Cat on a Hot Tin Roof and The Glass Menagerie — worked inside the bounds of realism and followed clear narrative lines. Several choreographers have taken on Streetcar, but none, according to Atlanta Ballet artistic director John McFall, have attempted Camino. Shortly after its 1953 premiere, New York Times theater critic Brooks Atkinson described the somewhat nonlinear, surreal work as “a long incantation with a long cast of characters and a constant flow of mood and experience and the great mass of it is lucid and pertinent.”

Times critic Wilborn Hampton wrote in 1999 that the play creates “a separate world that exists as much in the psyche as in any reality.” Sounds daunting. But for two centuries, choreographers have explored blurry realms between fantasy and reality. In the right hands, Camino could be ideal for dance.

Atlanta Ballet insiders say Pickett’s adaptation tells a story through the eyes of Kilroy, a character based on patriotic iconography from the World War II era. It will grapple with human mortality, the burning desire to connect and the will to live.

There are just two additional Atlanta premieres next season; the rest are revivals from this season and last.

Alexander Ekman’s “Cacti” is likely to satisfy those who think contemporary dance is pretentious as well as those who like it, but don’t take themselves too seriously. Featuring a string quartet, voice-over text and 16 dancers running, falling and writhing, it’s a send-up of the idiosyncrasies and self-indulgences of contemporary dance and is considered one of Ekman’s most successful works to date.

Audiences will get a second look at Jean-Christophe Maillot’s gorgeous Romeo et Juliette and Alexei Ratmansky’s “Seven Sonatas” in encore performances from this season. The company will also revive Ohad Naharin’s “Minus 16” from its company premiere in 2013. Atlanta Ballet will also bring back the popular “Minus 16.”

It is unusual for a regional ballet company to revive three works so soon after their premieres, and this certainly begs the question why. On the one hand, it gives dancers — who’ve spent countless hours in the studio learning the dances — a chance to grow in their roles. It also allows the audience to understand more of the work’s details, complexities and deeper meanings. But whether or not subscribers will want to dig deeper into works they’ve already seen, or seek new works elsewhere, will be a test of the season.