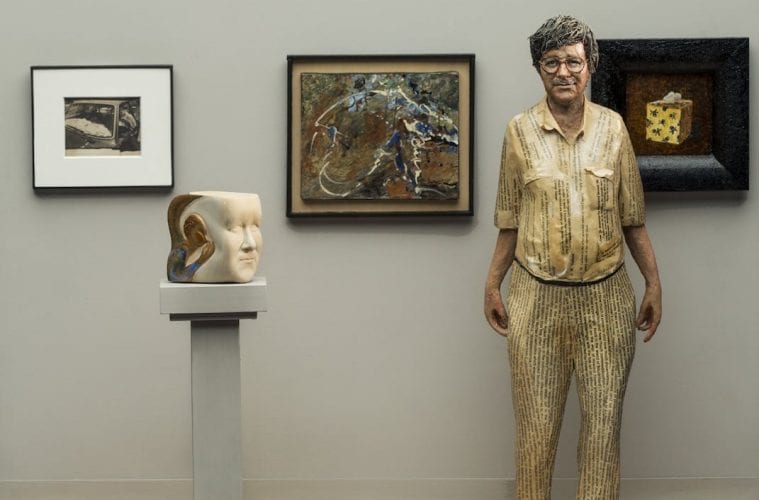 We’re thrilled to learn that a diorama by Atlanta artist Susan Cofer depicting ArtsATL columnist Jerry Cullum will be part of the upcoming exhibition The Wonder of it All at the Museum of Contemporary Art of Georgia, opening April 28.

The piece, originally created in 1999, depicts Cullum in what might best be described as his natural habitat, surrounded by works of art. These are miniature works by artists admired by Cullum, including E. K. Huckaby, Maurice Clifford and Frank Hunter. His shirt shows some of his many bylines, and the pants (where can we get a pair?) are printed with text from his reviews.

In the upcoming show, Cofer and photographer Jerry Siegel depict prominent figures from the Atlanta art world, from visual artists, writers and musicians to critics and patrons of the arts. The various portraits will be accompanied by a selection of works by the depicted artists drawn from MOCA GA’s permanent collection.

Among the works will be a photograph of Cullum by Siegel.

“The Siegel portrait looks all too much like me, which saddens me,” Cullum says, “but I’m happy that it also contains background details of so much art by artists I’ve written about. As if by way of obvious allegory, I am blocking the view of most of a painting of which I happen to be particularly fond. Critics can always be counted on to get in the way of seeing the art.”

Far be it for us to contradict our most venerable critic, but here we must disagree. As always, Cullum helps us see the wonder of it all.

The exhibition opens with a reception at MOCA GA on the evening of Friday, April 27, and runs through June 30. Cullum’s Notebook appears regularly on ArtsATL.