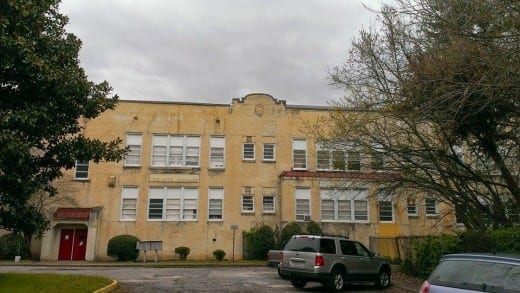 The board of the Arts Exchange has announced that the nonprofit has decided to sell its Grant Park property and move next year into a yet-to-be-determined space.

The Southeast Community Cultural Center, the parent organization, bought the former school on Kalb Street in 1984, and has provided affordable studios as well as the Paul Robeson Theater, the XChange Gallery and educational programming there ever since. The announcement comes on the heels of a series of controversial redevelopment projects around Grant Park. One such development, by Fuqua Development, which will include apartments and a Kroger, backs up to the Arts Exchange property. Developers are also circling the Atlanta Stockade, an iconic Gothic structure next door. Poet Alice Lovelace is board chair and a founder of the Arts Exchange.

Board members were concerned the new development would impinge on their programs. “We have large outdoor events like music, and we’ll have people butting right up against us over there,” says board chair Alice Lovelace, a founding member of the collective. “All of that seclusion will be gone.”

By the same token, the development had increased the value of the property. These changes — as well as the building’s deterioration and its lack of heat and parking — contributed to the board’s decision to sell.

The board has begun looking for a new home inside the Perimeter, but possible sites range from the far westside to Decatur and down to the airport. Potential properties include an old hotel in the emerging South Downtown neighborhood, a church and even a former funeral home. In the meantime, leases are month-to-month.

The board told the artists it hoped to find a building by August 2016 and invited the artists to move their studios there. The plans to keep the organization going came as a relief to those who had heard rumors of the sale and worried about finding new studio space. “It’s not like it will close down and we’ll have nowhere to go,” says painter Elyse Defoor. “In a way it was a little bit of a relief to know we’re not getting kicked out and stop living in limbo. I’m encouraged.”

Others say they are unsure if they will make the move. At least one artist, bemoaning the demise of historic buildings and alteration of the Grant Park neighborhood’s character, expressed disappointment that the organization had decided to sell rather than rehab the 1930s building, which the buyer would almost certainly demolish.

Still, Lovelace says the move is the right one for the Arts Exchange and provides an opportunity to make a fresh start. “When the future calls, you flow. You don’t fight. To flow with it meant something better, something more secure,” says Lovelace. “We saw this as an opportunity to reenvision ourselves.”

Adds board member John Brandhorst, “We want to join the larger conversation in a way that we have not been able to previously.”