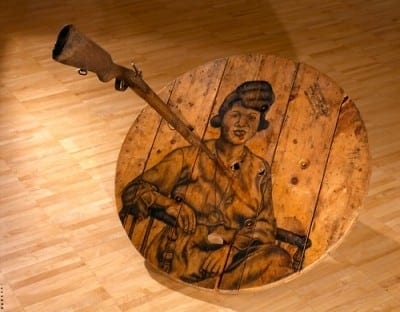 When I made the rounds of exhibitions mounted in conjunction with the National Black Arts Festival, I was struck by the connections between seemingly disparate artists. One, noted in today’s story in the print edition of the AJC, was the use of portraiture to define and assert African-American identity.

You see it across generations and media in the documentary photographs Doris Derby made in Mississippi during the civil rights era (at Hammonds House) and the charcoal drawings of everyday people in Whitfield Lovell’s mixed-media tableaux at ACA Gallery at SCAD.

For a culture defined by mainstream culture so long as “other,” portraiture becomes a form of empowerment, which might explain why the genre has persisted in African-American art even during periods when abstraction prevailed. Both artists insist on the dignity and humanity of their subjects, and both, to quote Lovell, “honor the lives of people whose existence went unnoticed.”

Kehinde Wiley’s paintings of street types in the grand manner (and often poses) of Old Masters make for a provocative contrast. He trades quiet dignity for swaggering assertiveness. His paintings are an act of cultural repositioning that also expose the hierarchy of power implicit in the history of portraiture.

How’s this for synchronicity? As I was writing this post, an announcement for “Creating Identity: Portraits Today,” an exhibit about “redefining culture and self,” appeared in my inbox. “The Prophet and the King (Columbus)” (below) is included in the show, which will open August 14 at the 21c Museum in Louisville, Kentucky.

P.S. Lovell uses old studio portraits as his sources. These are the very photos Thomas Allen Harris is trying to preserve though his project, the Digital Diaspora Family Reunion. Harris, who was in town recently in search of photos for “Through a Lens Darkly: Black Photographers and the Emergence of a People,” a film he’s making with Deborah Willis, is creating the online site to encourage African-Americans to value and share (by uploading) their family photos.