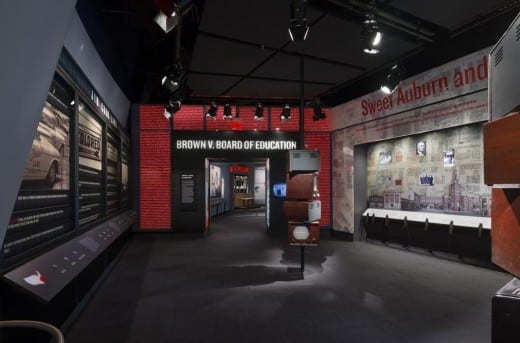 The history of the Civil Rights movement is staged in a series of "black-box theaters" linked by a symbolic gateways. (Copyright Albert Vecerka/Esto and Rockwell Group)

National Center for Civil and Human Rights trusts in the power of design to tell its stories, inspire visitors

The National Center for Civil & Human Rights, which opens today, uses stories of courage and struggle around the world to empower people to stand up for human rights. The leadership looked to the arts in many ways to help fulfill its mission. This article is the first of several devoted to that topic.

The National Center for Civil and Human Rights (CCHR) is the smallest kid on Pemberton Place, home to the World of Coca-Cola and the Georgia Aquarium. But thanks to the distinctive presence of the building’s curving design and multi-hued façade, it more than holds its own.

And that is, shall we say, by design.

“Design had been a key part of the overall process from the very beginning as a way to convey the ideas and evoke the emotions we wanted from visitors — even as they approached and entered the building,” said CEO Doug Shipman.

The dramatic form of the 40,000 square-foot building, by Phil Freelon and the Freelon Group and architect-of-record HOK Atlanta, is intended to attract attention, as is the colorful monumental mural in the glass-walled lobby, which is visible from across the lawn. But harnessing the power of design was particularly critical in the creation of the exhibits, the center’s core. CCHR is not an object-centered repository like a museum. In fact, aside from having access to the Morehouse Collection of Martin Luther King Jr.’s papers, it was starting from scratch. It would have to depend on design to carry the ball.

One precedent for this approach is the United States Holocaust Memorial Museum which opened in Washington, D.C., in 1993. “Rather than build exhibits around objects, we looked for the objects that would tell the stories,” said David Mandel, who was on the Washington museum’s groundbreaking design team and is CCHR’s director of exhibits and design.

The kind of immersive displays used so effectively at the Holocaust museum and others would also, it was deemed, be useful in engaging an important target audience: those who didn’t live through landmark human rights battles such as America’s civil rights movement and had no idea what it took for their forebears to claim the rights they take for granted.

From the outset, Tony-winning Broadway producer George C. Wolfe, the center’s chief creative officer and curator of the civil rights exhibit, knew he wanted “to put the viewer inside the story.” But he and the center had high standards for the content. The exhibits should have “the visual potency of theater plus intellectual rigor of a museum,” he said.

To that end, the center built a team to conceive them. Wolfe and Jill Savitt, curator of the human rights exhibit, worked with designers at the Rockwell Group in honing the concepts and selecting the stories that would be the vehicles for sharing them with the public.

Then, as designer David Rockwell said, “Our job was to take the ideas and figure out how to make them happen.”

The designers also built content and immersive experience into the interior architecture. As visitors climb the stairway in the back of the gallery recounting MLK’s assassination, they find themselves on the balcony of the Lorraine Motel, the scene of the crime. Another example: moving from one section to the next, visitors pass through well-demarcated portals. The words of “Brown vs the Board of Education” are printed in red on one; images of the famous “I Am a Man” poster on another.

Said Wolfe, “The gateways are metaphorical as well as physical. Once you go through, you can’t go back. Neither can America. There is forward motion. People won’t surrender.”

Other considerations affected the design. Each exhibit, for example, addressed very different themes: human rights issues around the world, a broad and ever-changing topic; the history of the American civil rights movement, a very specific chronology; the display of MLK’s papers, which required a contemplative space.

Making exhibits that would be meaningful to audiences of different ages, knowledge and interests — from scholars to teenagers — was a big challenge. Balancing substance and accessibility, said Savitt, was “the central tension.” How to be true to the seriousness of the subject and still engage a digital generation used to bells and whistles and spectacles?

Shipman said that many deem it necessary to “tone down” design when serious subjects are involved, but he rejected the practice. “We want folks to have an emotional experience that opens up their intellectual curiosity, in that order. I think design can open up the emotional space for the individual to connect with our content.”

In addition, he noted that although the center serves a memorial function, its goal was civic action. “Inspiration, courage and individual empowerment are important themes, and the design needed to reflect that possibility and that ultimate hope.”

It is no design accident that the human rights and civil rights exhibits terminate in a white room with an oculus open to the sky. What metaphor for hope is more universal than light?

Coming up: an architectural review on June 24.