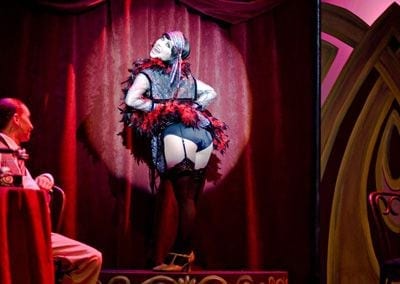 When the economy gets tough, live music is often deemed a luxury. Orchestras are costly. Musicians’ unions demand fair wages. And dance companies and theaters around the company often end up playing to recorded music.

Such is the case with the Atlanta Lyric Theatre and its final show of the season, Kander and Ebb’s “Cabaret.” As I point out in today’s AJC, the musical gets a G rating and is performed to taped music. (Claci Miller as Sally Bowles, photo by Cayce Callaway.)

Artistic director Brandt Blocker says the reason is purely financial: The theater’s March production of the flapper musical “The It Girl” experienced a $50,000 shortfall in ticket sales. Blocker says the Lyric will restore the orchestra when the 2009-2010 season opens in September with “The Will Rogers Follies.” “Live musicians will be back in the pit for next season,” Blocker says.

Let’s hope so. The Lyric is the city’s only professional theater devoted entirely to musical theater. Its relocation last year to the newly restored Earl Smith Strand Theatre on the Marietta town square has revived its spirits and energized its audience. No matter how crisp and professional the recording, however, there’s nothing comparable to the spontaneity and excitement of a live band. Atlanta audiences deserve nothing less.