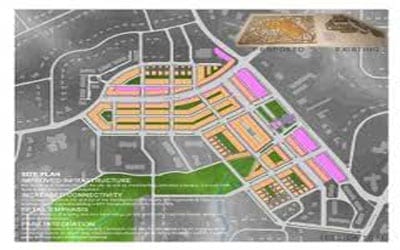 MODA’s “Adapting Suburbs”: Is the New Suburbanism coming to a strip mall near you?

A veteran of national publications, Jonathan Lerner is a man of many specialties, from architecture and urbanism to art and design to food and travel. He is volunteer media co-chairman for the 2010 Congress for the New Urbanism. This is his second piece on New Urbanism for ArtsCriticATL.com. Click here to read the first. — Cathy

Perhaps it’s fate that Atlanta is hosting the 2010 Congress for the New Urbanism, as world-famous as our burg has become for its ever-metastasizing suburbanization. One of its themes this year is transforming those dispiriting suburban non-places so that they will no longer send you screaming back to your traditionally laid-out intown neighborhood (should you be lucky enough to inhabit one).

“Adapting Suburbs in the 21st Century,” the exhibit the Museum of Design Atlanta has mounted to coincide with the congress, gives a glimpse of ways we might reclaim “dead malls, zombie strip centers, see-through office park buildings, ‘ghost’ big boxes and the acres of parking lots that surround them.”

It’s a small, didactic show, displaying images of half a dozen successful projects where such bleak suburban sites have been turned into thriving communities in the New Urbanist mode. These case studies are taken from “Retrofitting Suburbia: Urban Design Solutions for Redesigning Suburbs,” co-authored by Georgia Tech associate professor of architecture Ellen Dunham-Jones, who is the co-chair of this week’s congress.

The exhibition also displays a conceptual study, “Sprawl Repair, Anytown, USA,” which illustrates how, for example, the excessively vast interior spaces of a McMansion could be reconfigured to make it a viable lodging house for singles or seniors, and how a cul-de-sac subdivision could become more livable with the insertion of a mixed-use neighborhood center and cross-connecting streets.

Alas, none of the case studies is of a transformed place in metro Atlanta. Nevertheless, while you’ve had your mind on other matters, this region has come to have one of the highest concentrations of New Urbanist projects anywhere. These range from redevelopments of dead industrial sites such as Atlantic Station (a former steel mill) and Glenwood Park (once a cement factory); to reinvigorating new master plans for old town centers that had been rendered moribund by big-box retail, such as those of Smyrna, Acworth and Woodstock; to entirely new islands of compact urbanism at the metropolitan edge, including Vickery Village in Cumming and Serenbe in the Chattahoochee hill country.

If you’re not used to deciphering master plans or picturing the built environments of unfamiliar places, you may find the case studies less engaging than the display of two projects by students from Dunham-Jones’ just-concluded Master’s of Architecture studio at Tech. In that course, each student selected a real — and really dysfunctional — suburban site in metro Atlanta and created a vision for its reinvention. Side-by-side before-and-after models illustrate how these places, where today you want only to do your business and flee, might become places where you actually want to settle down and live.

Alysha Erin Buck focused on Perimeter Pointe Shopping Center, a site whose only urbanistic feature right now is the adjacent Sandy Springs MARTA station. Her idea is a long-term plan, inspired by the organic evolution of medieval towns. The present acres of parking lot would be divided into small residential lots, lining new streets laid out in a loose, deliberately irregular pattern. For the existing strip-retail buildings, Buck would stipulate adaptive reuse rather than demolition. For the whole project, she prescribes construction techniques and materials intended for longevity and which lend themselves to acquiring patina — load-bearing walls of brick, for example, instead of glass curtain walls.

Her models show the place now, at an intermediate phase, and fully built out. Looking down on the last of those, you see a close, connected, slightly crooked village. It’s not too different from an aerial view of, say, an Italian hill town — but with a rapid-transit link to the world’s busiest airport just a few steps away.

Jessica Toal’s project would transform Toco Hill Shopping Center. Everything presently standing must go! Retail space equivalent to what’s there now would be rebuilt along the edges of newly plotted streets, with residences above, and most of the site would be given over to low-rise multifamily buildings. The focal point of her community design is a park that doubles as a transit node where bus routes would intersect. The residential buildings would not provide parking, because in Toal’s vision of a bus-riding future, it wouldn’t be needed.

If that last suggestion seems radical, consider the idea for Toco Hills that another of Dunham-Jones’ students, whose project is not in the exhibition, came up with. This too would do away with today’s aging strip center and outparcels, and replace them with housing for 2,200 residents plus a row of high-rise, high-tech greenhouses that could, supposedly, produce enough to feed both them and the 10,000 other people who live within a mile.

Yet another student project not on display also chose Perimeter Pointe and looked to historical design, taking inspiration from classical gardens. It would consolidate parking at the center into a couple of structures, allowing the rest of the asphalt to be remade as parterres, allées and such; even the Home Depot garden center would become a quasi-public park.

City centers including our own are reviving and drawing people in, while suburban places are losing value and staying power. As the center — hopefully — continues to grow more urbane and livable, it could find itself encircled by zones of increasing economic and aesthetic poverty. (What’s uglier than a big-box retail strip? A dead big-box retail strip.) But we can figure out ways, like those suggested in this exhibition, to retool and reuse what’s out there.