One door has closed for artists seeking major grants, but another remains open until June 4, and $50,000 is at stake.

The  Museum of Contemporary Art of Georgia has awarded its Working Artist Project grants for 2010. The worthy recipients are Katherine Mitchell, Micah Stansell and Alan Caomin Xie. Thanks to the support of the Charles Loridans Foundation and the National Endowment for the Arts, they will receive, among other perquisites, a $12,000 grant, a solo show and catalog and a part-time assistant. 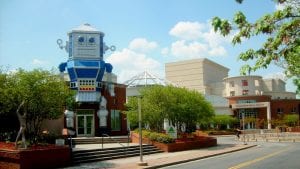 Artists may still apply for the Hudgens Prize, however. This new award, administered by the Jacqueline Casey Hudgens Center for the Arts, will net one Georgia artist $50,000 and a solo show at the Gwinnett County arts center (at left). The finalists will be honored in a group show this fall, at which time the winner will be announced. The jury is made up of Sylvie Fortin, editor in chief of ART PAPERS magazine; Eungie Joo, Keith Haring director and curator of exhibitions and public programs at the New Museum, New York; and David Kiehl, curator of prints at the Whitney Museum of American Art.

Remember: Applications are due June 4.