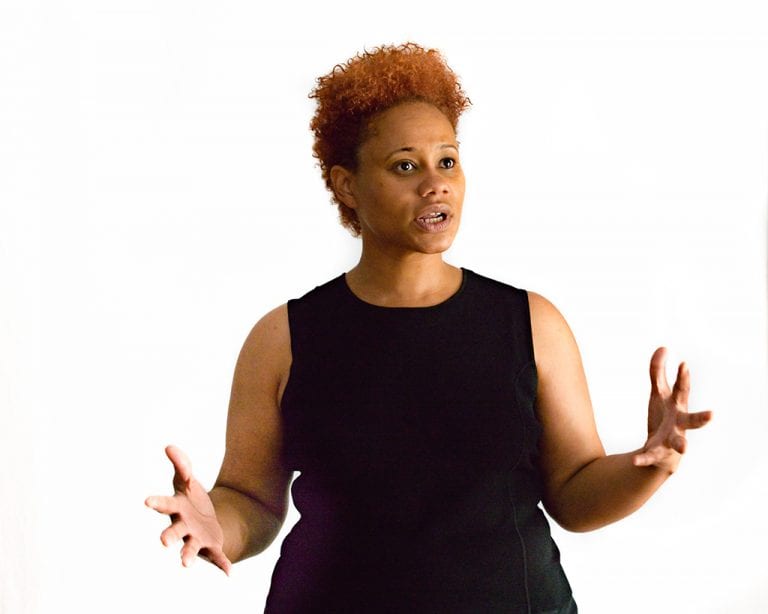 Out of Hand Theater’s Shaking the Wind begins with an unusual curtain speech. “We’ve just locked the door, and my husband is monitoring the phone, so there will be no interruptions,” announced the host of the November 11 performance. “Does everyone have line of sight?”

For several weeks, Out of Hand has staged Shaking the Wind not at traditional performance venues, but at residences around Atlanta and even as far away as St. Simon’s Island. The one-woman show written and performed by Minka Wiltz runs through December 2 and is an easily portable production, with just a handful of props. The performance I attended was held in the foyer of a home in Little Five Points, with half the audience seated in the living room and the other half in the dining room.

The environment brought some quirks, like the occasionally creaky floorboard, but also made an engaging way to see a show, seemingly shaking up the expectations for spectators and artists alike. The domestic surroundings and close quarters particularly suited Shaking the Wind’s wrenching, personal material.

In Shaking the Wind, Wiltz tells the story of her childhood growing up poor in Atlanta. The fulcrum of the show is her strained relationship with Olivia, her pious, disapproving single mother, who berates young Margie (Wiltz’s first name) for being insufficiently religious as well as being overweight. “I was 190 pounds in fifth grade,” Wiltz says. Olivia also dismisses Margie’s aspirations for being a singer, or any kind of creativity that doesn’t involve the Lord. 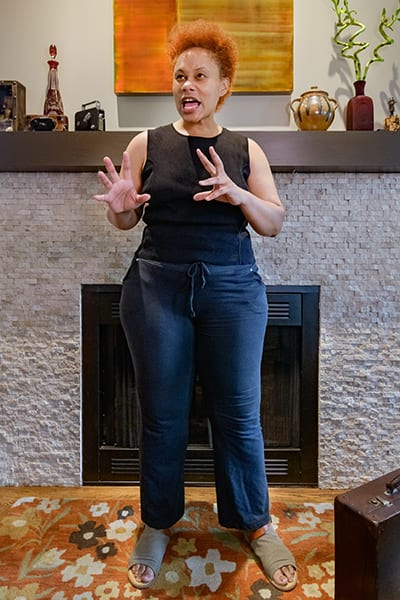 Throughout the show, Wiltz rapidly switches between characters and time periods, often adding a scarf or picking up a flask to indicate a change in role. She plays about a dozen characters, including her star athlete brother Max, her bad-tempered, boozing uncle Bitsy-Boy, her sexually uninhibited grandmother Ethel and more. At times, the changes in physicality, including childish fidgets and unbalanced inebriation, have the quality of watching an acting exercise, but Wiltz’s ability to capture distinct individuals is undeniable.

Directed by Thomas W. Jones II, Shaking the Wind shifts between violent anecdotes from family history to childhood reminiscences, some of which can be purely comedic, including an incident involving chocolate-flavored laxatives. Much of the action is confined to young Margie’s limited point of view, making Olivia’s behavior and choices seem particularly mercurial. An underpaid pharmacist, at one point she moves the family from a nice apartment to the McDaniel Glenn Housing Project, which her children find traumatic and shameful. (The audience may even envision the scenes in the house where the show is staged, even though they’re strikingly different.)

Eventually Olivia takes to public preaching, launching into a fire-and-brimstone sermon on a MARTA bus. As a performer, Wiltz clearly relishes the plummy verbalizations, Gospel music interludes and the chance to play two other street preachers: an intense woman in a fedora and a man with an incomprehensible speech impediment.

When Margie becomes a rebellious young woman in the latter section, the script seems to go into fast-forward, leaping ahead to her grown-up confrontations and attempts at reconciliation with her mother. After a single viewing, the show’s arcs aren’t completely clear: Does Olivia have a mental problem that worsens over time? How does Margie change her mind about religion? Does she find inner strength as she comes of age, or does she just wait out her childhood?

Out of Hand has staged one-person in-home tour shows before, with 2013’s Salome presenting a soft-spoken monologist holding court over a literal tea party. Shaking the Wind has a different pitch, with Wiltz bringing the kind of energy that could command a concert hall.

She makes a particularly powerful impression during the show’s stream-of-consciousness musical interludes, composed by S. Renee Clark, which include gospel standards, operatic arias and even a rollicking bluesy number about how “Jesus is my Sweet Meat.” At times you get the feeling she could literally blow the roof off. Usually you see such actors up on stages, under spotlights, from rows of seats away: Shaking the Wind gives a rare chance to see a performer — and a childhood — in close-up.