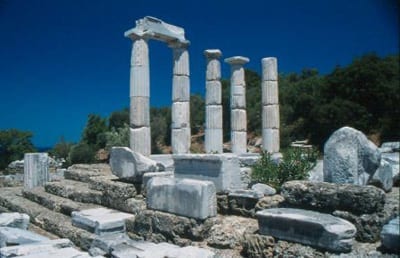 The Michael C. Carlos Museum at Emory University will be taking you on archaeological expeditions in Egypt, Greece and Israel through its new blog, iSites.

On Feb. 6, Peter Lacovara, senior curator of ancient Egyptian, Nubian and Near Eastern art, will start blogging about his work at Malqata, a palace city constructed by Pharoah Amenhotep III c. 1417-1379 B.C.E. near Thebes. Sparing no expense or expanse, Tut’s grandfather had his minions dig a huge harbor for his vast, elaborately landscaped residence and the surrounding town. Though occupied only briefly, the site has the potential to yield new information about life and urbanism in ancient Egypt. 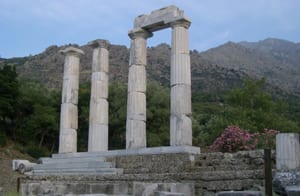 iSites will be home to blogs from two more Emory archaeologists this summer. Professor Bonna Wescoat will describe the excavation of the Temple of the Great Gods (left) on Samothrace, the Greek island on which she has worked for more than 30 years. Samothrace looms large in ancient Greek history and myth. The god Poseidon was said to have watched the Trojan War from its mountaintops. The parents of Alexander the Great met there. It is also the find spot for one of the most spectacular archaeological discoveries, the Winged Victory, now in the Louvre.

Oded Boroski, professor of biblical archaeology, will continue to explore the remains of a city that was destroyed by the Assyrian King Sennacherib in 701 B.C.E., in response to the revolt of King Hezekiah of Judah. The attacking military set fire to the town, and its inhabitants left in great haste. Because the ash preserved what they left behind, the site offers insight into daily life.