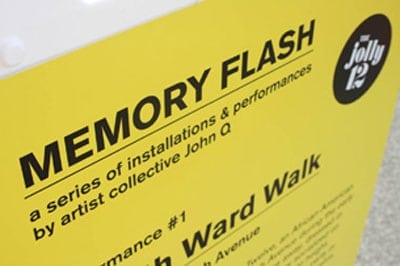 Call it public art about private life. “Memory Flash,” which will take place Saturday, is a cross-town performance, memorial and meditation intended to shine a light on Atlanta’s queer history.

Conceived and staged by Andy Ditzler, Joey Orr and Wesley Chenault, collectively called John Q, the piece looks back to the 1950s and ‘60s, when gay Atlantans led surreptitious lives. It includes a parade, a tableau vivant baseball game, talks and a film projection. It will unfold progressively in four locations: the Old Fourth Ward, the home base of the Jolly 12, an African-American social group; Ponce de Leon Avenue, at the site of the long-gone Joy Lounge, a nightclub featuring drag acts; Piedmont Park, where ladies’ baseball leagues played; and Ansley Mall, whose now-defunct movie theater was raided by police during a screening of the Andy Warhol film “Lonesome Cowboys.”

For more information, a schedule and maps, visit the Web sites for John Q and Flux Projects, which is the sponsor. Tune in here next week for a report.