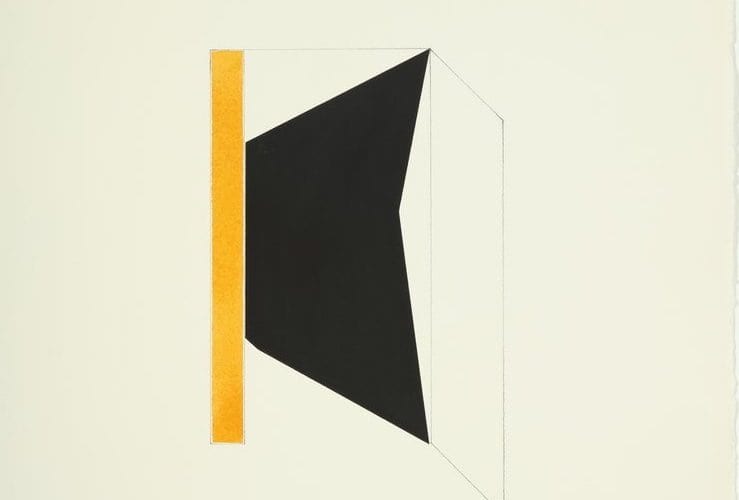 Medford Johnston’s “1983” is an exquisite study in geometry, line and color

Medford Johnston’s 1983, at Sandler Hudson Gallery through March 18, is actually “1983 and 1977” (and thus has nothing to do with 1983 being the lead-in to the resonant year of 1984, made iconic by George Orwell in his freshly bestselling novel). The show is composed of two independently conceived bodies of work from those years that, for various reasons, Johnston placed in storage and dealt with no further until the present exhibition. Both reflect the ways in which Johnston developed finished artworks from initial starting points, but the process is invisible in the back gallery’s elegantly minimal trio of works on paper from 1977–78, which in spite of titles (The Fox, Big Bear, alongside the more expected Untitled) are wholly geometric. Each began with a solid black irregular polygon (one is a hexagon, another a pentagon, but the lengths of the sides and the angles are elegantly different). A year later, Johnston revisited them and added a different bar of color to each. Still later, he added lines drawn in pencil. The results are so exquisite that it is difficult to imagine being satisfied with their earlier state, even though each could be regarded as a finished work at any one of the three moments.

After this minimalist journey, the territory traversed by the drawings leading up to the 1983 painting Untitled (for Seurat) feels positively epic.  In reality, of course, the actual shifts involved in incorporating a curve inspired by Seurat’s paintings into Johnston’s universe of straight lines is itself fairly minimal, but for Johnston’s oeuvre, the leap involved in such a seemingly modest alteration was immense. In this series of preparatory studies, we can witness the appearance and disappearance of different ways of incorporating the curve. Each discarded option leads to a new possibility until finally the finished painting is executed in a mixture of bright primary colors and vivid secondary ones. Despite the subdued pastel shades of some (not all) of the preliminary pieces, in the painting even the cyan that approaches aqua blue is assertive.

There is nothing preliminary about the 10 color studies. Each of them is a fully realized possibility, using different geometric compositions and different palettes to explore the best way of translating Johnston’s intention into a full-scale painting. Only one study, Untitled, Study for Painting on Black Ground, replicates the composition and the palette of the painting itself, and even this is quite different because it was rendered on an underlying black background.

The four pencil drawings are, again, ways of getting at the right geometry. Only one of them reflects the composition of the final painting. All of this is deserving of close study, but a detailed description of the differences would be as intolerable and perhaps useless as a detailed study of the visual details would be of use. — Jerry Cullum

Medford Johnston’s 1983, at Sandler Hudson Gallery through March 18, consists of 20 works brought out of a quarter-century of storage. The drawings and paintings mostly date from the titular year, 1983, which the artist retrospectively sees as revelatory and transformative.

A complicated web of allusion and influence connects Johnston’s abstractions to French painter Georges Seurat. Stephen Sondheim’s Sunday in the Park with George, a musical about the creation of Seurat’s A Sunday Afternoon on the Island of La Grande Jatte, inspired Johnston to think of the monumental post-impressionist painting (itself on the eve of an unlikely revival via its part in Ferris Bueller’s Day Off). Seurat’s canvas translates the brushy abstraction of impressionism into divisionist dots of pure hue and was completed in 1883 — exactly 100 years prior to Johnston’s work in 1983. Inspired by new theories of perception and deeply analytic, Seurat’s painting allows the eye to combine colors when viewed at distance. Seurat helped usher in high abstraction of the early and middle twentieth century. Such reductive and nonobjective imagery — think Malevich, Mondrian, Brancusi — seems foundational to Johnston’s career of abstraction.

Mostly works on paper, Johnston’s media ranges from scratchily rendered pencil to bright, dense acrylic thickened with modeling paste. A few works on paper date from the late 1970s. Big Bear (1977–78), for example, consists of an irregular heptagon and an elongated rectangle. Faint, angular marks hint at the orthogonals of linear perspective. The subtle push-and-pull of space recalls “light” paintings by Bauhaus professor and artist László Moholy-Nagy. Houston Love Song (1977) and The Fox (1977–78) are similar, and throughout, form is strictly geometric. Only later does Johnston’s visual language soften.

A series of untitled drawings from 1983 read as studies for the larger paintings. The ever-changing geometry of each suggests the machinations of an artist on the verge of discovery. In the larger, vibrant canvases the early adumbrations seem transformed — solid and reified. Seurat’s A Sunday Afternoon on the Island of la Grande Jatte.

The focal point of the show is Untitled (for Seurat). Notably, it features intersecting curved lines that echo contour in Seurat’s A Sunday Afternoon on the Island of La Grande Jatte. A dominant arc and similar, subordinate semicircles in Johnston’s painting echo the contour of a woman in Seurat’s canvas — or better, the woman, because she is, almost undoubtedly, the star of the heavily populated picture. Her bustle follows an exaggerated, obtuse curve, and her parasol creates an alternate arc. Standing close, her companion (her John, we’re to understand, she is hired paramour) contrasts her undulant shape with a cubic top hat that hints at the rigid bourgeois norms of late nineteenth-century France. In Johnston’s painting, a black, rectilinear shape in the upper left quadrant evokes the blocky hat.

Of course, Johnston’s painting lacks both the easily discernible subject matter and the critical edge of Seurat’s canvas. Seurat criticizes middle-class Parisians for the prescribed manner of their leisure, foregrounding the demimonde couple in shadow so as to suggest that they are hiding in plain view. Johnston’s painting, due in part to its nonobjective formalism, shakes off such associations. His reference to Seurat’s complex magnum opus is part homage, part departure and translates Seurat into distilled geometry.

Though it’s clear he’s indebted to modernism, categorizing Johnston is tricky. Johnston studied art in the 1960s, witness to the end of modernism. Yet, his reverence for abstract form is obvious. Created in the early eighties, Johnston’s work for his show seems anachronistic in a pluralistic decade dominated by commercially viable neo-expressionism, conceptual art and controversies over Serra’s Titled Arc (1981) and Serrano’s Piss Christ (1987). From a certain (modernist) vantage point, Johnston’s work seems untainted in a glitzy, troubled decade of art making. It’s easy to understand the lure of the era: art-for-art’s sake, the myth of “pure,” painting unveiled and the zenith of Western art.

The inclusion of more recent work by Johnston might benefit exhibition and provide helpful context. Juxtaposed against this now-older work, recent paintings and drawings might trace the development of formal motifs still fresh in 1983. That said, there’s something charming and novel about the premise of a year rediscovered and newly understood. — Rebecca Brantley