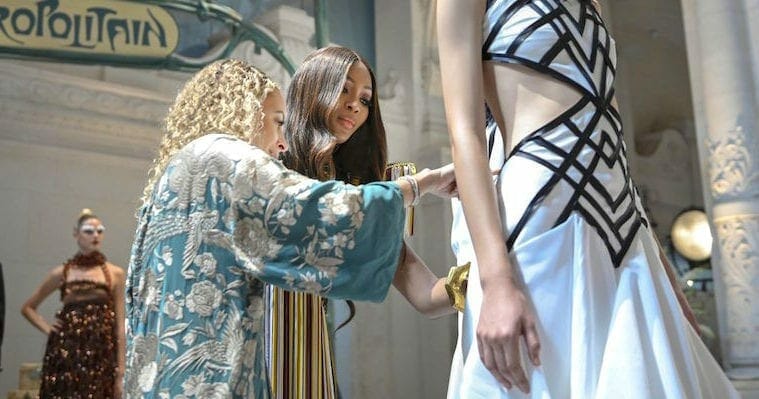 "Making the Cut," with Tim Gunn and Heidi Klum, takes a dozen competing designers from New York to Paris to Tokyo.

May streaming: Watch high-fashion “Cut” from the comfort of your quarantine clothes

I never watched Project Runway, so I can’t give you any compare-and-contrast intel on supermodel Heidi Klum and fashion guru Tim Gunn’s new collaboration, Making the Cut. But the 10-episode Amazon Prime series, which drops the final two episodes of its inaugural season today (Friday, April 24), has been my happy place lately. In this time of quarantine, social distancing and embargoed travel, it could be yours, too. You don’t have to care a fig about fashion. OK, the clothes are sometimes stunning. But what the show mainlines is the frivolous, casual things we all took for granted just a few long weeks ago. Making the Cut gathers 12 fashion designers, all already professionally established, and has them compete for a million-dollar jackpot. The money sounds nice, but what the series delivers is the sense of freedom we currently lack.

The show starts in New York and hopscotches to Paris for four episodes. The designers — mostly American, with a handful of Europeans — have their first runway show near the Eiffel Tower. It’s tacky but exhilarating. The guest judges include Joseph Altuzarra; Carine Roitfeld, editor of Paris Vogue; and, most importantly, volatile supermodel Naomi Campbell, who takes her very personal opinions and disappointments way up to the heights of Mount Olympus.

Tokyo follows Paris for four episodes. I don’t know where the finale takes place, but I’m happy with the final three contestants. More than their fashion skills, I loved watching them explore the cities in travelogues that are more engrossing now than they were ever intended to be. The contestants bicker, unwind, knock down sake and bond in a tiny Tokyo bar. Moments like that now seem like science fiction.

AMAZON PRIME | Tales From the Loop

Another new original series is Tales From the Loop, a moody sci-fi drama inspired by the paintings of Swedish illustrator Simon Stålenhag. I would recommend it if I had made it past the third (of eight) episodes. It’s like what the writers of The Twilight Zone might have come up with had they been heavily dosed with mood stabilizers.

Set in a future-retro rural landscape littered with fantastic, technological machines and whatsits, it’s the tale of small-town folks whose lives are affected by the workings of the main industry: an underground laboratory called the Loop, also known as the Mercer Center for Experimental Physics. Whole houses disappear, floating up into the stratosphere. A young girl gets lost, only to run into herself — 30 years older. Two classmates find a device that lets them swap identities — to dangerous ends.

Good actors are involved — Oscar nominee Jonathan Pryce, Rebecca Hall, Paul Schneider — playing townsfolk whose storylines intersect across stand-alone episodes. I understand that the idea was to emulate something like Our Town or Spoon River Anthology. If the series achieves that, good. But it couldn’t hold my interest. It is lovingly made but driven by a relentlessly contemplative, piano-based score that seems to be trying to do the emotional work the tales themselves don’t earn.

AMAZON PRIME | Selah and the Spades

Like Loop, the original Amazon movie Selah and the Spades also feels like a Frankenstein monster made from other parts: Wes Anderson movies (especially Rushmore), Rian Johnson’s high-school noir Brick, and Mean Girls, with a sprinkling of the Harry Potter movies and Donna Tartt’s The Secret History. It also repurposes the “scorpion and frog” story, which made a bigger impact when it featured years ago in The Crying Game.

Selah (the lovely, composed Lovie Simone) is a 17-year-old senior at Haldwell School, a sort of Colors-of-Benetton version of the waspy boarding school with which we’re more familiar. She leads the Spades, one of five factions who rule the place, where teachers and other adults are ineffectual extras to the great teenage dramas unfolding center screen. The Spades are responsible for “party favors,” selling students drugs that enliven the basement and forest raves they’re always having. The obstacles and dangers that would come from procuring these substances are largely ignored.

Mainly, Selah and the Spades is a moody, hushed, artfully composed story about the dance of power and attraction between Selah, her lieutenant Maxxie (Emmy winner Jharrel Jerome) and her chosen successor, underclassman Paloma (Celeste O’Connor). Writer-director Tayarisha Poe’s film is worthy, but like Tales From the Loop, purports to be deeper than it really is.

The best thing I’ve watched on Netflix lately is the four-part Unorthodox, loosely based on Deborah Feldman’s memoir. The emotionally translucent Israeli actress Shira Haas plays Feldman’s counterpart, Esther, known to everyone as Esty. Small as a child and not much more sophisticated, she’s a wig-wearing member of Brooklyn’s ultra-orthodox community of Satmar Jews, married to the equally young and inexperienced Yanky (sensitively played by Amit Rahav, who, fun fact, was a drama counselor at Ramah Darom, the North Georgia Jewish summer camp for youths, in 2016). We meet Esty on the day she’s planning to bolt — not just her marriage, but the nation, traveling to Berlin where her estranged mother now lives.

The miniseries toggles between two timelines: Esty’s tentative new life in the challenging freedom of Berlin and the years of rituals and oppressions that came with her marriage. In flashbacks, we see the social opprobrium Esty earns when she doesn’t immediately get pregnant by a husband who’s nearly as ignorant about sex as she is.

In Berlin, we see her opening up to new possibilities, personified by a group of welcoming young musicians she meets on her first day in the new city. Unorthodox amps up suspense by sending Yanky and his dissolute cousin Moishe (Jeff Wilbusch) on a search-and-recover mission to Berlin, in a plot line that feels a little forced. And, yes, some of the multiple lucky breaks and friends Esty meets in Berlin feel unearned. Other than those small issues, it’s a lovely and informative tale of one soul’s self-rescue.

If you’re in the mood for grim, gray, subtitled murder mysteries (and I always seem to be), I recommend a couple of other Netflix series. From Iceland comes The Valhalla Murders (eight episodes), the twisty tale of Reykjavik police detective Kata (Nína Dögg Filippusdóttir) who investigates a string of mutilations and murders of middle-aged and older people who worked at a 1980s school for boys with a dark history. She’s aided by Arnar (Björn Thors), an intense detective flown in from Norway for the case. As in the best of these things (think the UK’s Prime Suspect or Happy Valley), what’s as interesting as the whodunit is the professional gender politics and home-life pressures our lead inspector must navigate.

Less gripping but pungently steeped in cigarette smoke and 1980s, Soviet-era repression, The Mire (five episodes) follows a world-weary middle-aged journalist and a cub reporter in a small Poland town. The murder of an admired civic leader and a prostitute is quickly but suspiciously solved, and the reporters try to link those deaths to the mysterious suicide of two high-school sweethearts. The show may be slow going for some, but I loved giving in to the bleak atmospherics of a system where everything seems to be rigged against the truth. Maybe because it feels like a freakish mirror to now?

Unless you’re in the mood for atmospheric, supernatural/psychological camp, I’d skip Freud, the eight-episode Austrian-German series that turns hot, young psychoanalyst-in-training Sigmund (Robert Finster) into a detective. I tuned out somewhere in the third episode, when it seemed that every other person in Vienna had the power to hypnotize the others into doing their bidding…

If you haven’t watched the Georgia-shot, family crime drama Ozark, or haven’t finished the recently released third season, now’s a good time to catch up. As stressed spouses and partners in crime, Jason Bateman and Laura Linney are as good as always. So is Julia Garner as their white-trash factotum, and the great Janet McTeer, who’s in sinister strong form as an attorney working for and against our protagonists. The season is also elevated by Tom Pelphrey’s endearing, frustrating turn as the chemically unstable brother of Linney’s character.

Put a couple of Netflix original series on your radar: Hollywood (May 1), mega writer-producer Ryan Murphy’s sexually and racially revisionist gloss on the movie mecca in the 1940s, with Darren Criss, Patti LuPone and a million others; and The Eddy (May 8), a drama about the owner of a Paris music club, with André Holland (Moonlight) and Joanna Kulig (brilliant in Cold War). I’m enjoying these, but there’s a review embargo until next month. Let’s check in again then. And please be safe.

Oh, I forgot to mention Tiger King. Like you need me to tell you about Tiger King.

On other fronts, if you really want to have a time-sensitive super-binge of some of the best premium TV from the past decades, remember that HBO is streaming full seasons of its best shows – The Sopranos, The Wire, Succession, Six Feet Under, Veep, Barry and Silicon Valley – for free. But only through April 30. After that, you’ll once more need a subscription to watch.