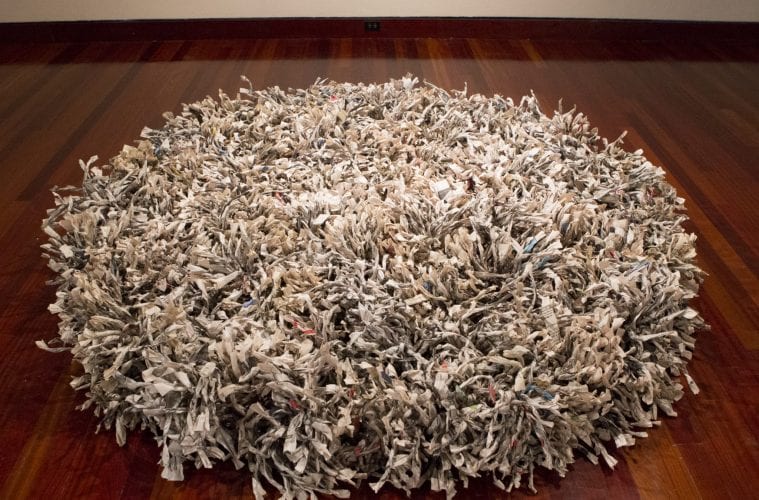 Silent meditations on equality, conflict resolution and the reconciliation of dualities are all on view at Spelman College Museum of Fine Art through May 16 in Maren Hassinger . . . Dreaming.

The exhibition, which encapsulates the evolution of ideas over the course of Hassinger’s 40-year career, is titled to suggest a key characteristic of her art.

“As I reflected on the minimal restorative qualities of Maren’s work and the subconscious wants, aims, and desires that are only released within the realm of dreaming . . . I thought that it was important to really magnify this aspect of her work,” says Andrea Barnwell Brownlee, museum director and cocurator of the show with Spelman curator Anne Collins Smith. Canopies are a recurring theme, from Weight of Dreams (a low-lying cloud composed of various e-correspondences that chronicle Hassinger’s 20-year effort to bring a single public artwork to fruition) to The Dream (an ethereal bed canopy made of heart-shaped, palm-sized red bud leaves).

The pieces can be “oppressive or comforting,” cautions Smith, “depending upon the museum-goers’ point of view.” But whatever ones perspective, she adds, the eye-catching pieces “leave our guests feeling mesmerized, blissfully lost and transported.”

For all her art world bona fides — reviews in Art in America and the New York Times, works in the collections of AT&T and Pittsburgh International Airport, a performance art piece staged at the Museum of Modern Art — the Los Angeles native is unbound by convention. In fact, her relationship to museums and galleries could be described as complicated.

“I’ve always thought of museums as antiquated houses . . . historically controlled and privileged environments,” she explains in a recent telephone interview.

Hassinger (pronounced like “passenger”), who is director of the Rinehart School of Sculpture at Maryland Institute College of Art, cites a nagging fear that her work “might lose its edge or intrinsic importance just because it’s placed in a house of culture.” To counter that reality, she makes a conscious effort to reach out, eliminate barriers and bring everyone together by breaking some rules. Her Sit Upons, stacks of woven-paper seat cushions, for example, were inspired by Hassinger’s days as a Campfire Girl — definitely “not a high falutin’ art experience,” as she puts it today — and created to debunk any notions of appropriate museum behavior.

Adults tend to circle the installations with trepidation, whereas kids are more apt to take a seat and get comfy lickety split. Smith characterizes the children’s responses as “über engaged,” calling their confidence and sense of inclusion “a refreshing counter-narrative that honors Maren’s goal to push the physical space of art practice, presentation and interaction.” Hassinger also pushes boundaries in a mixed media installation titled Wind. A collaboration between the artist and daughter Ava, “sitting in repose like an idol in nature” as the elder puts it, Wind incorporates Super 8 film, sound and yards of diaphanous white fabric that break the fourth wall.

“We were not conscious of making anything beautiful,” emphasizes Hassinger. “We were just playing.”

And though unanticipated, the result is sublime.

Other videos in the collection are more intentional: including Daily Mask (an examination of race and identity) and Birthright (an excavation of Hassinger’s painful relationship with her late father).

“My dad had antipathy for women — which extended to me,” she acknowledges. “But I was absolved once I learned how he never reconciled the trauma of abandonment after his birth mother gave him away.”

The simmering anger that consumed her father — an architect obsessed with buildings and aesthetics — and left him embittered is a trait Hassinger recognizes among too many artists of color today. And though she acknowledges the depth of racism and its legacy of marginalization, her inclination is to redirect her focus for the sake of productivity.

“Although victimization and oppression may very well be a reality, at this point talking persistently about it is not a conversation I want to hear anymore,” says Hassinger. “I’d rather concentrate on issues and environments where we all have a common interest.”

Mother Nature is one such nexus. “Within nature, we are equal,” she reasons. “We are not black or white, old or young, rich or poor, powerless or kings, et cetera. We came here the same way and share the world. If we share so much, why can’t we live harmoniously? Why can’t we dream of harmony?” Though nature informs all of Hassinger’s art, an especially evocative example is the installation called On Dangerous Ground, a commentary on her instinct to “go against the norm” within the confines of formal art house settings.

Likewise, Wrenching News, a circular installation that dominates the space on vertical and horizontal planes, is a study in contrasts. Its organizing principle is the mandala, a geometric figure representing the universe in Hindu and Buddhist symbolism.

Hassinger finds a “resolved calm about the size and repetition of the circles that contradict the reality of the facts” literally documented on the material — strips of newspaper (in this case, the New York Times) twisted, bundled and assembled in a distinct pattern.

Whether inviting visitors to gaze up into canopies, reconsider boundaries or choose healing over past hurts, Hassinger’s work sets the stage for the kind of thoughtful daydreaming that can put lasting change in motion.

“I want the audience to be moved,” she explains. “Kind of like the experience of listening to music . . . where you don’t really analyze, but are swept along emotionally. You might feel like dancing, or crying, or just listening. I don’t want an intellectual experience. I want an emotional one.”

Hassinger will perform “Women’s Work” at Spelman on March 20.