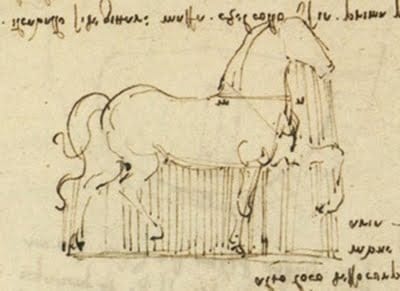 “Leonardo da Vinci: Hand of the Genius” and how artists grow

One of the insights offered in “Leonardo da Vinci: Hand of the Genius,” which opens today at the High Museum, is that the revered Renaissance artist was not a self-made man.

As I wrote in a story in Sunday’s AJC, no artist, even a genius, germinates in a vacuum. Leonardo’s artistic brilliance was rooted in his times and grounded in the artists who preceded him.

As fortune would have it, Leonardo came of age in one of the most glorious periods in Western culture, which saw an expansion of knowledge, the birth of humanism, the rediscovery of antiquity. In addition, as curator Gary Radke wrote in his book “Art in Renaissance Italy,” this was a period where art mattered.

One of the places it mattered most was the Florence of Leonardo’s youth. He could absorb the lessons of giants like Donatello, whose marble prophet looms over one of the galleries, simply by walking down the street.

Again in a lucky happenstance, Leonardo’s father apprenticed him to Andrea del Verrocchio, another contemporary great whose many commissions gave the student ample opportunities to learn and hone his craft.

A section of Verrocchio’s Silver Altar of the Florentine Baptistery, “Beheading of the Baptist, on view at the High, makes for a particularly interesting comparison because Radke has proposed that two of the figures are the work of Leonardo.

A review will run later this week.