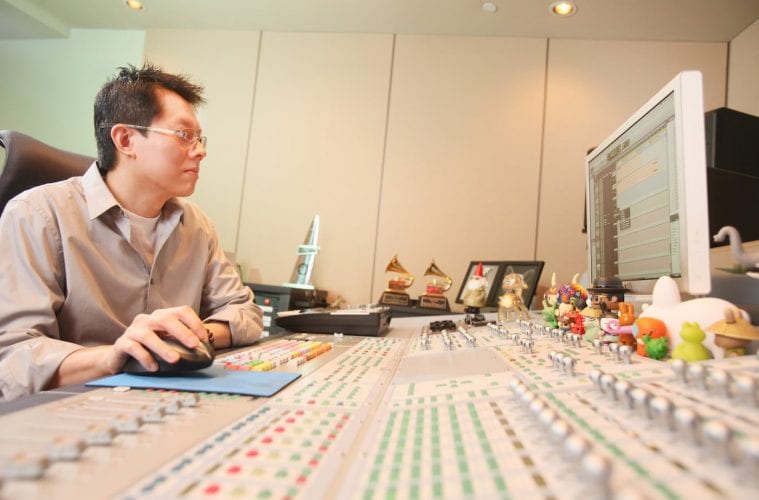 Legacy Series: As sound mixer for the superstars, Grammy-winner Phil Tan remains the calm at the eye of the storm

Phil Tan’s minimalist recording studio–located in a converted barn at the Callanwolde Fine Arts Center where he serves as director of the Music Recording program at Callanwolde’s Rick Baker School of Music and Music Recording–becomes a welcome refuge as lightning flashes, the skies roil and sheets of rain blow sideways outside.

When a thunderclap of Biblical proportion threatens to raise the roof, it’s not even clear if the sound and the fury have registered on Tan’s Richter scale until he quietly murmurs, ‘Man, that was vicious.’ By the same token, his tone is so matter-of-fact he may as well have been asking for paper instead of plastic at a supermarket checkout.

In an industry that’s predicated on bringing the noise, funk, hype and drama — all day, every day — Tan has a reputation for being the calm in the eye of the storm. And in an arena that’s no stranger to super-sized egos and shameless self-promotion, he is the rare insider who acknowledges that it takes a village to rock the house. A sound mixer whose work accounts for 300 million albums and singles sold in the United States with an economic impact that exceeds a billion dollars, Tan says, “The stars have to align for any project to become successful. Songwriters, producers, arrangers, performers, recording engineers, mastering engineers, marketing people, radio DJs and the artist all play a part in successfully promoting any song. I’m just a very small part of it.”

Tan mastered the art of staying small while interning at Soundscape, Inc., a now-defunct Atlanta-based recording studio where Jon Marrett gave him a critical first break in 1988.

“The rules were clear,” says Tan. “Stay out of the way. Shut up. And don’t do anything unless asked.”

Fortunately, he never conflated the job description with being inconsequential, and after just two days in the studio, a pair of bandmates from 38 Special, guitarist Jeff Carlisi and drummer Jack Gordon, took note of the kid’s stable, calm personality.

“We gravitated to him because he was so centered,” says Carlisi, who remains friends with Tan nearly 30 years later. “Phil did everything from setting the consoles for the next session, to cleaning out ashtrays. He kept his ears open. He wanted to learn. He was always very attentive to our needs. He was a consummate professional as an intern.”

Tan attributes his early success to being in the right place at the right time as artists like Toni Braxton, Outkast and Organized Noise were at the vanguard of a new sound in the ATL. Producer/songwriters L.A. Reid and Babyface were early-adopters. And after collaborating with Jermaine Dupri on an album for the female quartet Xcape, Tan became his go-to audio engineer. “Jermaine is the prime reason I have a career,” says Tan, who is not prone to hyperbole. Anthony Hamilton, who first met Tan when recording the debut album Coming From Where I’m From, calls him the ‘quietest loudest‘ speaking man ever born. “Phil taught me that when you’re in a room with a lot of loudspeakers, if you talk softly you’re on a different frequency — so you can get your point across.”

A three time GRAMMY Award-winner for his work on Mariah Carey’s The Emancipation of Mimi, Ludacris’s Release Therapy and Rihanna’s Only Girl (In the World), Tan nearly missed his life’s calling in an effort to fulfill the dreams of his father.

He was raised in Malaysia by strict Catholic parents who did not allow secular music in their home. His exposure to Western music came compliments of a friend whose older brother, then a student at Oxford University, used to send punk and rock albums home to Asia from the UK. BBC Radio broadcasts and Top 40 shows from the States helped round out the pop culture picture. From the start, Tan recognized that sound had the power to change his mood.

He loved art as a child and wanted to be a comic book illustrator when he grew up. But by the time he enrolled at the University of Alberta in 1988, Tan resolved to put aside any childish yearnings in favor of a more lucrative career path. Though he thrived academically, he was not wired to be a businessman.

He credits his big sister and brother-in-law for freeing him to reconnect to his heart’s desire by simply asking, “What do you want to do with yourself?” when they saw him floundering at school.

Following one semester in Edmonton, Tan transferred to Full Sail University‘s Recording Arts Program — figuring that the eight-month curriculum would allow him to complete his course load and get a job quickly.

The decision did not go over well back home.

“My parents were not supportive of my decision to abandon my business studies,” he says. “Ten years into my career, every time I called home my dad would be like, ‘When are you going back to school?’ I understand what they wanted for me, but it’s not what I wanted for myself.”

Tan is fairly certain that his parents still don’t fully understand what it means to be a sound mixer — but neither do most non-musicians.

“When people ask what I do,” he says, “I tell them I’m a chef for music. I take all the different ingredients that people give me [voice, drums, bass, keyboards, guitars, pads, sound effects] and try to put it together in the right proportions and, hopefully, create a dish that is palatable to the listener.”

An accomplished amateur chef, Tan says that too much processing, auto-tune, effects, equalization, compression and limiting on a sound track is comparable to “adding too much salt or spice to an otherwise pristine piece of meat or produce. The core of the flavor gets lost . . . and it becomes something else.”

All of which begs the question: can the maestro (who admits to having “two left feet” on the dance floor) still tune into music the way he did back in the day?

“There’s a bit of analysis mixed with pure enjoyment,” he says. “Some songs are made so you want to analyze them and others just feel good. Back to the food analogy — there are times when you eat at a restaurant and try to break down how a particular dish was made. And then there’s times when you take a bite and go, ‘It’s heavenly! I don’t really care how it’s made.'”