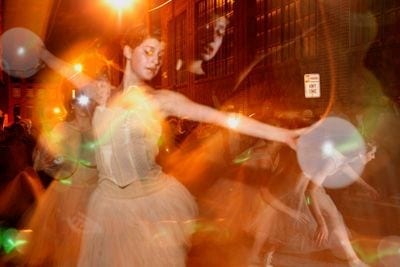 Le postmortem on Le Flash — the art and the street party

The Le Flash crowd waiting at the corner of Fair and Bradberry to see Lauri Stallings’ “Pour” caught a helluva warm-up act.

In what seemed a spontaneous response to the gathered group, several teenagers began showing off their dance moves (break-dancing? crunk?) to the music blaring from a nearby club. They were terrific choreographers and dancers, imaginative and acrobatic.

Then the kids asked the audience to dance. Several observers gamely accepted the invitation (art consultant Marianne Lambert, above) and appeared to have a blast.

It was a great segue to “Pour,” a killer dance performance that also started in the street. Stallings’ vision — costumes, props and intimations of metaphor — reminded me of Matthew Barney. (Read Cynthia Bond Perry’s dance review here.)

Those two performances embodied the ingredients that made Le Flash a success: unexpected encounters, artistic experimentation and a happy vibe.

Put the emphasis on vibe. The street-party atmosphere and sheer number of possibilities discouraged prolonged examination of any one thing, which was OK because a good many pieces would not have stood up to cold-hearted critical analysis.

I missed a lot, but of the pieces I saw, “You Sound Funny When You Smile” was among my favorites. Stefani Byrd and Wes Eastin channeled Tony Oursler in their cleverly subversive video projection (below), in which a pair of talking heads with Asian features heckled passers-by in the Hmong language.

Though the words were unintelligible, the tone was clearly mocking. Together with the faces’ looming scale, the experience humorously put viewers into an immigrant’s shoes.

Also on my list: Fahamu Pecou’s viewmaster piece, a clever probe of race and semantics, and Shana Robbins’ arresting video performance shot in a stark but dreamy Icelandic snowscape.

Danielle Roney’s “Mission” gets the award for sophistication, thoughtfulness and layered revelation of the term ”site specific.” The video projection, whose protagonists were people from the nearby Union Mission, simultaneously called attention to those in the shadow of the party and invited them in.

Which brings us back to the street dancers.

The Castleberry Hill neighborhood is an amalgam of galleries with mostly white patrons; clubs and retail outlets with mostly black patrons; residents who live in newly built lofts; and the Union Mission population.

In the milieu of good cheer and curiosity Le Flash created, social and racial divisions temporarily melted away.

Indeed, the most satisfying part of Le Flash was being part of the mix of artists, gallery-goers, club types, sightseers, families and weirdos. Let’s do it again next year.