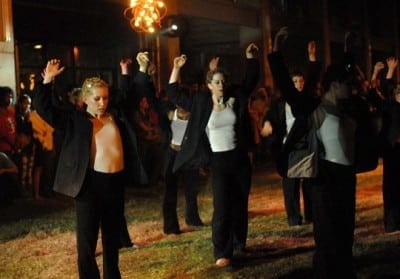 Last Friday, in Castleberry Hill, Lauri Stallings and her collaborative performance group gloATL offered a new site-specific work, “pour,” for Le Flash-Atlanta. Part of the city’s second annual one-night celebration of contemporary art, Le Flash ushered in the month-long Atlanta Celebrates Photography festival. (Read Cathy Fox’s visual art review here.) One of ACP’s goals is to help Atlanta to become a world-class cultural center — lucky for the festival that the city is home base for an emerging internationally recognized choreographer.

Though all are multi-layered and rich in imagery, “pour” is the most cohesive, captivating and emotionally daring. With each new piece, Stallings’ language grows more fluent and articulate, with images more specific and meanings more distilled. From an inner source, it seems she’s extracted and refined a flexible, fertile, organic language. (Top photo by Joeff Davis.)

Honesty cuts through falsity, and the expression is unique and fresh, with endless possibilities. (Disclosure: Stallings recently joined the faculty of Kennesaw State University’s Program in Dance, where I teach.)

Initially, the journey seemed childlike, innocent. A petite Nicole Jones, dressed in a black suit and sneakers, sauntered down Bradberry Street, her long strides punctuated by sweeps and thrusts of arms and legs, elegant, breezy suspensions and breathless halts.

Effectively recalling images from “big” and “rapt,” Big Rube (from the OutKast/Dungeon family) recited his def poem “Ruby 4,” while Jones walked with him hand in hand. Stripped to the essence, it was the most poignant and natural blending of def poetry and Stallings’ choreography I’ve ever seen. As a delicate, pensive Bach “Prelude in C Major” played, the ephemeral gift of a green egg floated skyward.

Cameras flashed as several dancers, clad in April McCoy’s romantic tutu designs, tumbled up the alley between Haynes and Mangum streets. In a flurry of anticipation, their bodies seemed to light up as if fireflies flashed inside. As these fantastical beings led, we followed, through an enchanted world up the alley and across Nelson Street.

The crowd headed into an unfinished building, a stark, triangular space of concrete, steel and glass. As music pounded, a hanging mesh of fluorescent lights — Jason Butcher, Scott Carter and Mario Schambon’s “Fiat Luxe” — bore down on the black-suited dancers. The unrelenting hammering seemed to command their bodies, as they exposed their chests with open jackets and then closed jackets protectively.

Fleeing to an enormous empty interior space punctuated by a line of straight pillars, it felt as though humans were at odds with a bleak, harsh world. Under a shower, to Marion Black’s “Who Knows,” an up-and-under blues rhythm seized Nicole Johnson’s body as water poured over her — exposed but not sensual.

Moving down the extent of the long, narrow cavity, with dirt and gravel underfoot, each section escaped from one space to the next. Images collided — a tense, rush-hour street scene, a power struggle. In a solo, Toni Doctor Jenkins desperately spun and fell, as she bathed in dust, seeking but not finding water.

In a final section, Arvo Pärt’s “Tabula Rasa” rolled and churned as 12 dancers played out a gripping sequence of emotions — tilting, twisting and running urgently, they lashed, swept, undulated, fell and rolled on a bed of green turf. It felt like a struggle to keep one’s humanity intact in a bleak, automated, dehumanizing world.

Escaping to a cool, open courtyard, dancers found solace in water, as one dancer, behind a sheet of falling water, laid her hands against a smooth stone wall. How satisfying to arrive at this cool, calm space after the fury had played out.

Though at times the action was difficult to see, and credits were missed, in all, “pour” was a revelation.