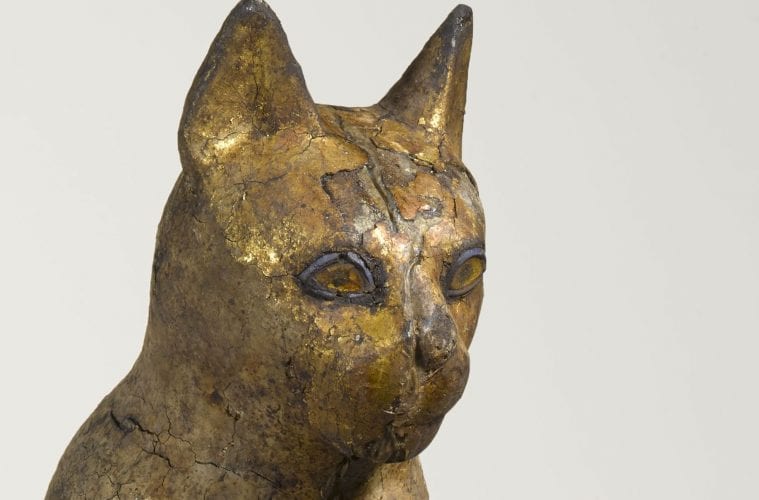 As any cat lover can tell you, felines are divine.

Ancient Egyptians took that notion even more seriously than pet owners of today, and a charming new exhibition at the Carlos Museum through November 11 offers a fascinating glimpse at the unusual status occupied by cats in the ancient world. It’s a small but superb show that explores feline themes in ancient Egyptian art. Organized by the Brooklyn Museum, and drawn from the collections of both the Brooklyn Museum and the Carlos Museum, the exhibition features more than 90 artifacts — sculptures, textiles, luxury items and funerary objects — dating from the Middle Kingdom to the Roman period.

The idea that ancient Egyptians worshipped cats gets bandied about from time to time — the phrase was even memorably used in the opening of a commercial for cat food — but it isn’t wholly accurate. Cats weren’t literally worshipped, but the ancient Egyptians did associate many of the cats’ innate characteristics with aspects of the divine. In the agrarian society, cats served the crucial practical purpose of ridding dwellings and granaries of mice, snakes and other vermin, and myths abound with powerful cats or cat-headed gods. The most powerful Egyptian god, the sun god Ra, sometimes appeared in the form of a combative cat. Lions, which at the time were found in semi-desert regions east and west of the Nile, were naturally associated with gods and pharaohs. And many goddesses took the form of a female cat, a fertile and protective mother to the litter of the human race. Cats were mummified in ancient Egypt, and the exhibition contains several examples of cat mummies and cat sarcophagi. These elaborate funereal preparations weren’t typically carried out so that pets could be buried in tombs alongside loving owners, but so that the spirit of the mummified animal could be offered by visitors to a temple. Indeed, so high was the demand that colonies of cats were raised specifically for this purpose, and occasionally, unlucky supplicants ended up offering bird bones, feathers and other detritus wrapped up in linen to look like a mummified cat by deceptive embalmers. An X-ray next to the cat mummy at the Carlos confirms that, wrapped within those bandages, is the real deal.

One of the most striking things about the show is how skilled ancient Egyptian artisans were at capturing the many moods and aspects of felinity. Egyptian depictions of human figures rarely seem so individuated or naturalistic — poses are stiff, heads shown in profile, bodies from the front — and those portrayals can often seem formulaic and repetitive: the primary concern was often in ensuring that statuary endured a long time, which prevented the use of dynamic poses or malleable materials. But surprisingly, the cats here seem to brim with life, personality, individuality and alertness. Perhaps ancient artisans simply felt freer in their depictions of animals than in their representations of humans. Whatever the reason, these cats are superstars.

We tend to associate Egyptian art with monumentality, but many of the exhibition’s best artifacts are small: from tiny pea-sized beads in the shape of cats’ heads to little statuettes complete with tiny gold earrings — or holes that once held them — the ancient Egyptian equivalent of a collar. Be prepared to lean in close to look at  scarabs, amulets, cutlery, game pieces and other smaller items showing depictions of cats. And make certain to spend some time with what is undoubtedly one of the finest objects in the show, a tiny brass statuette of a cat with exquisitely smooth, sleek lines and a complacent, vaguely smiling expression, as enticing and mysterious as the Mona Lisa’s. The best pictures simply don’t do it justice. The statuette even has an interesting story connecting it to the 20th century: it was once given as a gift by Charlie Chaplin to his wife Paulette Goddard.

Another stunner, and one of the largest objects in the show, is a granite bust from circa 1390–1352 BCE of the lioness-headed goddess Sakhmet, credited with having spared the human race from destruction after being placated by the god Ra. The ancient king Amenhotep II commanded that at least two statues of the goddess be created for every day of the year, so apparently there were many, but the one at the Carlos seems intriguingly solitary, powerful and contemplative.

Cat devotees may balk, but the exhibition is expanded with a room displaying ancient Egyptian depictions of dogs and jackals. Perhaps the Egyptians just didn’t care for the hounds as much — or maybe I’m biased — but the small collection of objects here seems less aesthetically satisfying, earthier, less divine. Still, look for a mummified dog with its thin linen bandages swathed in an elaborate and hypnotic cross-hatched pattern, its wrapped head somehow grimly comic and full of dog personality (the mummified cat looks disappointingly more like a decaying baseball bat, so the dogs actually win that round).

Regardless of which side of the age-old “cats vs. dogs” debate visitors fall on — and even if they’re normally allergic to both — they will undoubtedly be charmed by the magnificent artifacts in Divine Felines.