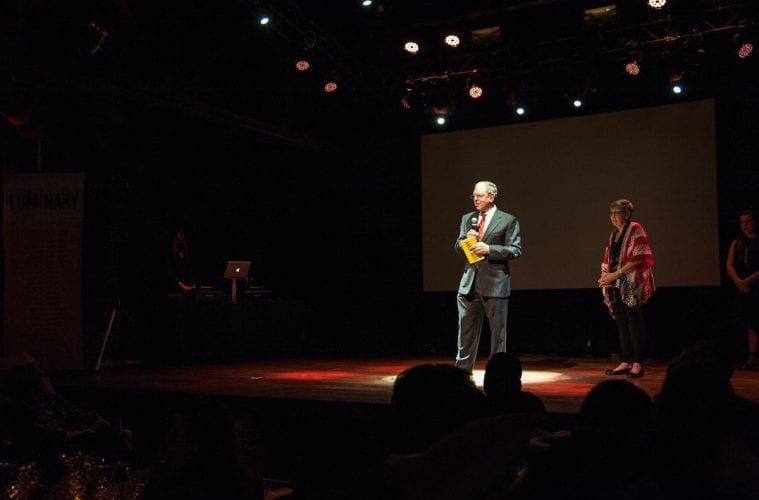 Ken and Kathy Bernhardt have been named the inaugural recipients of ArtsATL’s Amaranth Award for Philanthropic Legacy.

One of four multidisciplinary prizes — including the Beacon Award for Community Engagement, the Catalyst Award for Social Discourse and the Kindle Award for Innovative Practice — the Amaranth Award was awarded to the couple during the ArtsATL Luminary Awards ceremony on January 22, at Terminal West.

Though the term philanthropy is synonymous with a contribution of time or treasure for the benefit of strangers, the literal meaning of the word is “love of mankind.” And love has been the singular driving force behind all the Bernhardt’s have done to help shape Atlanta’s cultural landscape for the last four decades. “Ken and Kathy are both motivated by service,” says Susan Booth, the Jennings Hertz artistic director at the Alliance Theatre. “They go about the business of improving people’s lives with no desire for any attention or celebration. And when that’s your impulse, you put your head down, you push your sleeves up and you work. All philanthropists should strive to meet their standards.”

When the Bernhardts relocated to Atlanta from Ann Arbor, Michigan in 1972, Ken was an assistant professor at Georgia State University Business School, and Kathy was head librarian for College Park Library. They chose Atlanta, in part because they recognized its potential as a growing, vibrant city where they could become active in the emerging arts scene and, hopefully, make a difference.

Both grew up in households with civic-minded parents who got involved in their respective communities. But the real role-modeling began at home.

Kathy was surrounded by music, books and her mother’s paintings while being raised just outside Princeton, New Jersey. And Ken, who was raised in a tiny farm town about 40 miles from Chicago, still grows visibly animated when recalling the annual treat of birthday outings to see live theater when he was a child.

Given their exposure to the arts and culture as children, the notion that art was an unaffordable indulgence never occurred to them as grown adults, even when money was tight. “I don’t think [our approach to patronage] has changed over the years,” says Ken. “When we had no money, we gave a tiny bit of money, and as we had more money, we gave a little bit more.”

Early on in their marriage, “broke with students loans,” as Ken says, they would attend plays on preview nights because ticket prices fell within their budget. They have never underestimated the value of helping to create audiences by taking friends to see a show or visit a museum — in the hopes that they too might become ad hoc ambassadors for arts organizations. (Apparently, the strategy has worked. On a recent outing at the Alliance, the Bernhardts ran into 29 friends at a single performance — each of whom had been introduced to the venue by Ken and Kathy.) They have always been generous with their time.

Longtime friend William Pate, president and CEO of the Atlanta Convention and Visitor’s Bureau, cites Kathy’s reputation for being the first to raise her hand “when everyone else in the room is trying to become invisible,” whether called up to solicit donations for auctions, fundraise or lick envelopes. Meanwhile, Ken, who is the Taylor E. Little Jr. Professor of Marketing at Georgia State University and chairman of the GSU Foundation, has customized scores of marketing strategies to help nonprofit foundations and arts organizations like the Community Foundation for Greater Atlanta, Leadership Atlanta, Dad’s Garage, and the Woodruff Arts Center stay in the black.

“There’s a laundry list of things that would not exist at the Alliance without their support,” says Booth, “but the one I’m most proud of — because, finally, they’re letting us put their name on something — is the Kathy & Ken Bernhardt Theatre for the Very Young.”

The Alliance is an outlier, nationwide, in offering tailor-made theater for children 18 months to five-years-old. Founded on the principle that it is never too early to begin an arts intervention, the program was designed to enhance empathy and emerging verbal literacy. The long-term benefits of engaging a child’s imagination and encouraging them to see the world differently can be life-changing, especially if future artists, connoisseurs and arts patrons are cultivated in the process.

Best of all, says Booth, even the baby steps have been monumental. She recalls one toddler who was so enchanted by the absence of a fourth wall, that when invited to free a kaleidoscope of butterflies in a production, the hyper-shy two-year-old detached himself from his father’s side and waded into the crowd unescorted. The move, according to the child’s stunned dad, was unprecedented.

“That moment of socialization happened because the little boy was delighted by a story and invited to help make a story,” says Booth. “He has not snapped back to his original size. [It] was the beginning of something, and Kathy & Ken’s Theatre for the Very Young is what started that journey.”

Beth Malone and Courtney Hammond, co-founders of Dashboard, say their practice as curators has improved as a result of being invited to create an immersive theatrical experience for the newborn-to-toddler set. They delivered a visual and performance art piece, titled Babies in Space, that was touchable, jumpable, poke-able, throwable and a hit with children and their caretakers.

Though the artists have yet to meet their benefactors in person, their theories about the Bernhardts are remarkably accurate.

“They must be extremely progressive people to support such experimental programming like the Theatre for the Very Young and the creation of such an abstract, surreal space for babies to explore,” says Hammond.

“When a kid is feeling joy and profound wonder . . . everybody feels it,” adds Malone. “It debunks all these myths we have about image, reputation and differences. It immediately brings everybody down to the same level [where] we’re all vulnerable, and sweet and connected. To have the financial and passion support of [Ken and Kathy] is remarkable, rare and makes me proud of our city. I think their motivation must be heart-led.”