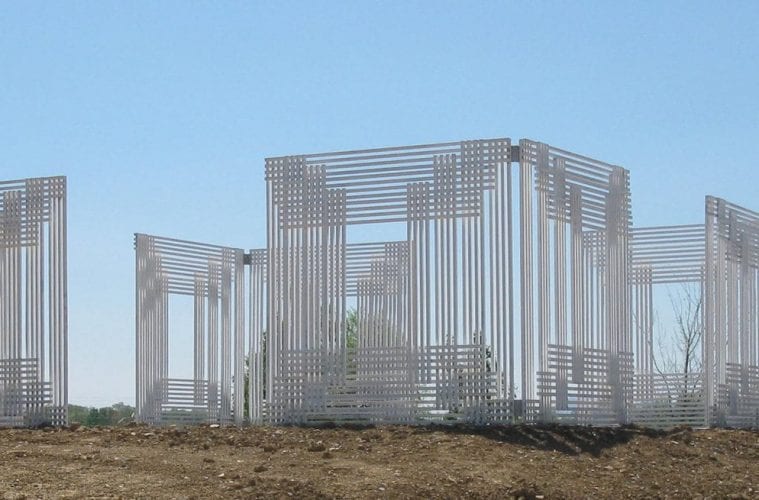 John Henry, just like the homonymous character from the folk ballad, is a “steel-drivin’ man.” Now in his mid-70s, Henry has been making monumental sculpture for over 50 years. But one early spring day, it’s just a golf cart he’s driving, and I am shotgun.

We are bumping across patchy grass at full speed, chasing down a huge dump truck that has just entered Henry’s Sculpture Fields with a payload full of broken concrete and dirt. Imperious despite the size of his ride, Henry questions the man in the driver’s seat of the big truck: “Who’re you haulin’ for?” Once satisfied that the load is fair game, we continue to tour the 33 acres of former brownfield in an industrial area south of Chattanooga that Henry, in partnership with the city and private supporters, has turned into a sculpture park.

The golf cart is the smallest thing around. Everything is big: the sculptural works, just over 30 of them on as many acres, one of which is 65 feet tall; the building where he and his wife Pamela live and work at the edge of the park; his warehouse-sized studio across the street. Even the two dogs that guard the place are big: Jackson Pollock, so named for the paint-spattered pigment scattered across his rump and Vladimir Tatlin, named for the Russian constructivist. Then there are the two crane yards, Henry’s own private crane and his tour bus, Reba McEntire’s old one, now parked as discreetly as one can park a tour bus, in the pea-gravel lot in front of their home.

A recent all-day celebration and sculpture burn, which featured the torching of a 30-foot-tall sculpture by Andrew Nigh, marked the second anniversary of the park Henry first envisioned over a decade ago. The tale of its creation is a story of ingenuity, good connections and a can-do attitude that Henry calls “hard work and arm twistin’.”

The Kentucky-born artist is a self-proclaimed expert at turning big ideas into reality, a trait critical to making the large-scale sculpture that inhabits the park. It was while taking the requisite art classes for a degree in architecture at the University of Kentucky in Lexington that he first fell in love with sculpture and “never made it out of the art department,” he says. His sculpture is collected internationally, and found in museums, cities and parks in Europe, Asia and in this country from Wisconsin to Chicago to Florida. He originally maintained studios in Chicago and Miami before he and his wife Pamela moved to Chattanooga almost two decades ago. They settled into an old apparel mill at the edge of the former brownfield and set to work transforming it, along with other nearby buildings, into a place to live and work. Land that had once been envisioned as a verdant park had become the overgrown haunt of vagrants whose fires the couple could see burning late into the night. Around 1910, the Montague family of Chattanooga donated what was then heavily wooded land to the city for use as parkland. The dream for greenspace never materialized. For whatever reason — and Henry says he has never had a “good, sound history” — the city began using the land as a dump and then as a landfill. Trees were contaminated and rotted out, and the field lay unused for several decades until the city tried again. This time, it was softball fields.

But Montague Park was closed to the public in 2003 when methane was discovered to be leaking through the improperly capped ground. The park reopened in 2012 as city-operated rugby fields, but most of the park was now shorn of all but the two or three original trees. In conversation with his friend Bob Corker, then Chattanooga mayor and now Tennessee senator, Henry asked Corker, “What are you gonna do with this thing?” Lacking a definitive answer, Henry provided his own: “Give it to me, and I’ll build a sculpture park.”

And build it he did. With the support of the city and Corker’s successor Ron Littlefield behind the deal, Henry sought the financial and artistic contributions of friends, both far afield and at home. The city of Chattanooga worked with the Tennessee Department of Environmental Conservation to restore the land. Henry formed a nonprofit and organized a board. He signed a 40-year lease with the city and called in favors from sculptor friends, and the place opened — ahead of schedule — in April of 2016. Sculpture Fields is free and open to the public seven days a week throughout the year. Visitors can see works including Jesus Moroles’ Granite Windows.

To imagine the physical challenges of the transformation, think of other sculpture parks such as Laumeier Sculpture Park near St. Louis or Storm King Art Center in New York. Subtract the elegant manor homes that activate those sites and the beautiful rolling hills and old woods of their natural surroundings, then add an industrial environment, destruction and neglect. Sculpture Fields is not yet beautiful, and though over a hundred trees have been planted in the park, it may never be the place of repose that those places are. Still, it is enlivened now with footpaths, visitors and the big art they come here to experience. And it is galvanizing a city.

Though Henry’s operation paid over $250,000 to haul it in, a Chattanooga family, the Chazens, donated over 10,000 loads of dirt brought in from excavations of road cuts and other construction sites to create the undulations and hillocks that now shape the once-denuded land. Henry’s own Bette Davis Eyes, a horizontal, rectilinear steel sculpture, sits spider-like atop one of them. And there are works by Henry’s friends: the well-known Mark di Suvero and the lesser known Lyman Kipp, Henry’s fellow cofounders of ConStruct, an artist-owned gallery in Chicago in the 1970s. There are artists familiar to me here, Israeli-born Hanna Jubran, and Albert Paley among them, and there are some less familiar, such as local sculptor John Petrey. There are regional and international artists, there are men and there are women, including Linda Howard, Jane Manus and Neltje, the great granddaughter of Abner Doubleday, the founder of baseball.

In all, there are pieces by 31 artists. (Henry has two, one of which was erected as a display for the public to see how such work is done.) The park owns only six of the works because those were donated. The rest are on loan from the artists, and all the work is for sale. Potential buyers are directed straight to the artists, and, though the park takes no commission, artists often make donations in return. As expected, there is a lot of steel here: fabricated, galvanized, welded. There is rust-colored Corten steel and steel painted in shades of blue, tangerine and the de rigueur pimento red. There is aluminum: Jane Manus’ geometric lines, Think Big in welded aluminum, and Linda Howard’s wing-like Star Center in brushed aluminum. One of the best-loved pieces — or at least most visited judging from the well-trod path circumambulating it — is that of Texas-born Jesus Moroles, who died in 2015 in a car accident. Granite Windows is a kinetic sculpture made of steel, granite and concrete designed to rotate merry-go-round-style, but in need right now, Henry noted, of some bearing work.

The most dramatic work, and most personal to the community, is Peter Lundberg’s Anchors (2015). At 65 feet, it soars against the backdrop of Lookout Mountain like a giant wishbone or paired chromatids, a tribute to the five servicemen killed in Chattanooga in July of that year. Lundberg, who donated his time and most of that of his crew, along with Henry’s help, dug out the shape in the ground, lined the negative space with black plastic (some of which remains as tatters in the sculpture), added three tons of steel rebar and poured in the concrete. Employing what Henry described as “the largest crane in Tennessee,” the work was hoisted from the ground to its upright position, to the amazement of Sculpture Fields’ first crowd. The Chattanooga community has embraced Henry’s Sculpture Fields. The annual event “Sculptures in the Sky” brings colossal kites from local purveyor River City Kites to the park for a day of family fun.

Sculpture Fields was envisioned in three phases. Already into its third phase now, and a year and a half ahead of schedule, a terraced amphitheater is being created for music and other outdoor performances. Also planned are more footpaths, a visitors’ center and a new entrance – and of course, more sculpture. Henry would like to reach 75 pieces, more than doubling the number currently installed.

Things are happening in this once industrial neighborhood. Standing beside the Henrys’ compound is an event space and its offices, and a brewery and restaurant are slated to arrive soon. Coming in the fall is the All Aboard Sculpture Train event, with cocktails in the park and a dinner excursion on the Tennessee Valley Museum train, which stops on the tracks adjacent to the property.

A dream can change a vacant lot. It can energize a city and the lives of those who live in it and who visit. But it takes more than just a dream or a good idea. “Most schools talk about how great the ideas are,” Henry tells students, “but an idea is not worth a damn if you can’t make it happen. . . . Ideas are a dime a dozen. Things that get built are something different.”

Sculpture Fields at Montague Park is free to the public, pet-friendly and open from sunrise to sunset seven days a week. The park is located at 1800 Polk Street in Chattanooga.