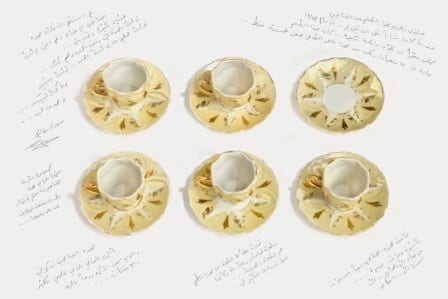 Stories of refugees have inundated the realm of media in recent years. As a result, overexposure to imagery of loss and despair may have made us a little more desensitized to this new world ordeal.

This is why the project by photographer Jim Lommasson, What We Carried: Fragments from the Cradle of Civilization, currently on view at Alif Institute until June 3, is not only timely but timeless. By shedding light on individual stories of Iraqi and Syrian refugees who fled their homeland and reconstructed their lives in the United States, Lommasson reminds us of the common threads that bind all of humanity. In a way, their stories become our stories because they are about friends, family and the place we call home.

Lommasson’s work is primarily documentary, and as a recipient of the prestigious Dorothea Lange–Paul Taylor prize from the Center for Documentary Studies at Duke University, he is best known for his book American Fight Clubs, on the hardship of boxers from rough neighborhoods. He also reported on soldiers’ stories after their time in Iraq and Afghanistan, which naturally led to his current, ongoing work on refugees.

Lommasson initially treated these stories like others he had done in the past, by photographing people in their environment, mostly around his hometown of Portland. But early on, these images left him unsatisfied because, he said, “they were not ‘good enough’ to translate the stories of displacement.” Eventually, he started to focus his attention on the fragments and memories that each of these refugees carried with them.

In most cases, it would take the form of a single object: a game of domino, a photograph, a Koran (Quran) or a Bible, a set of six coffee cups, a flag, a piece of jewelry — each charged with high emotion, these objects became de facto the tactile repository of their owner’s past.

“In a sense, this project is really about what they left behind more than what they carried,” he comments.

Lommasson decided to take his (mostly) self-funded — and “self-inflicted,” as he calls it — project a step further by making it collaborative. He invited each person he interviewed to provide personal reflections by writing directly onto the 13”x 19” print of the object they shared with him. The result is multilayered images that combine a straight, unornamented photograph of an object combined with writings, often a simple description in Arabic of the object and of the moment associated with it. In some cases, the photograph turns into an artwork with elaborate calligraphy, as is the case of Haifa Al Habeeb’s, an artist and activist who brought with her from Iraq a book of archaeological artifacts, knowing that most of them are being destroyed.

Lommasson has since worked with the Iraqi refugee communities outside Portland, extending his work to Boston, Portland, Chicago and Dearborn. The Atlanta exhibit, on loan from the Arab American National Museum, includes additional photographs that Lommasson took of Iraqi and Syrian refugees during a short stay in Atlanta.

Whereas most photographs inspire sadness and sorrow, a few have a light tone, such as the one Lommasson took in Atlanta of Tito, the dog. “Tito is a member of our family. I could not leave her behind,” the caption reads.

But a photograph is often the easiest to carry, a powerful object that refugees will take with them, and in many instances, Lommasson ended up reproducing a photograph. This is the case of Dr. Baher Butti, a psychiatrist and one of the first refugees Lommasson interviewed in Portland. On one family photo, Butti noted where each of his family members ended up: Budapest, England, Jordan or Dubai. His mother died after he left. “Buried in Dubai or maybe Abu Dhabi . . . well, I have to admit I don’t know where mother was buried,” he wrote.

As Marvin Heiferman writes on his seminal book Photography Changes Everything, “Snapshots fascinate us because they are always incomplete; they demand our interaction. We search them for clues, trying to remember or confirm who we were, who and what we’ve cared about, where we’ve been and what we’ve become.”

From an external point of view, looking at these photographs of displacement and resilience has the sobering effect to make us reflect on our own existence and to boomerang the very question on ourselves: “What would I take if I had to flee my country?”