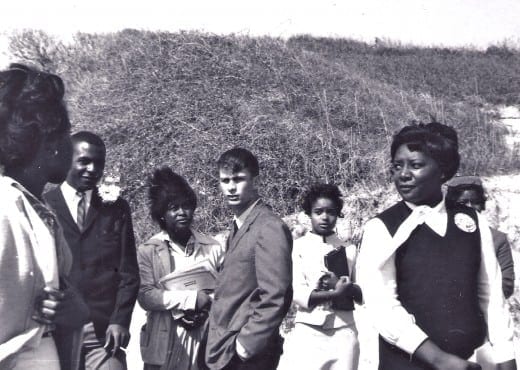 Author Jim Auchmutey chronicles a different side of racism, and reconciliation, in “Class of ’65” The year 1965, which saw the assassination of Malcolm X, Bloody Sunday, passage of the Voting Rights Act and a presidential order to enforce affirmative action, was a watershed for the civil rights movement.

Most of America was struggling to live up to its ideal that all men are created equal. Yet, in a tiny town in the Deep South, the residents of a small, interracial Christian community called Koinonia (pronounced COY-no-NEE-ah) Farm already held that truth to be self-evident. er, who grew up there, knows something about living those principles. His story is at the heart of Jim Auchmutey’s The Class of ’65 (PublicAffairs).

The tale opens in Sinks Grove, West Virginia, in spring of 2006 when Wittkamper received an invitation to his 40th reunion at Americus High School — and a letter from David Morgan, a former classmate.

“I expect you will be quite surprised to hear from me,” Morgan began. “If you remember me at all, it will likely be for unpleasant reasons.”

“Unpleasant” was an understatement.

High school had been the worst years of Wittkamper’s life. He’d been bullied to the point of persecution, even contemplating suicide at one point.

Yet other letters echoing Morgan’s tone soon followed. One came from Celia Harvey, who was living in South Carolina. A third from Joseph Logan in Alabama. Deanie Dudley, writing from Florida, sent the most anguished mea culpa.

“I will never again say . . . ‘how could all those Christian people in Poland and Germany have stood by and allowed [the Holocaust] to happen?’ I was present with you over a long period of time, and I never once did one thing to comfort you or to reach out to you. It was cruelty.”

The impact of her heartfelt expression was so profound that Wittkamper wept.

When Auchmutey first told Wittkamper’s story in an Atlanta Journal-Constitution profile in 2006, the response was swift.

“I got more reactions to that story than any other in my 29 years as a reporter with the AJC,” recalls the Atlanta native, before a mischievous grin spreads across his face, “with the exception of stories about cats, or recipes for coconut cake!

“My fascination with this story is split between our capacity for change and the possibility for reconciliation,” Auchmutey says.

But he was equally keen to examine the civil rights struggle from a different perspective.

“Relatively speaking, we’ve heard a lot less about how white people have changed — and that’s an awfully important part of the narrative. Dr. King called equal protection under the law for all Americans ‘the best thing that happened to white people, because it lifted a burden from their soul.’”

Koinonia (a transliteration of the Greek word κοινωνία, for communion) was established in 1942 on the principles of “a simple, peaceful, shared life and belief in the brother and sisterhood of all humankind.”  The commune continues to thrive, but its rejection of materialism, militarism and racism nearly 75 years ago made life beyond the borders of the farm almost unbearable for its inhabitants. Especially the kids.

As members of a commune, they were often mistaken for communists, the soft-spoken Wittkamper explains in a phone interview from his home in the mountains of West Virginia.

That was bad enough considering America was at the height of the Cold War. But when four African American students integrated Americus High in 1964, and Wittkamper rode to campus with them in a show of solidarity on the first day of the fall semester, an already fraught climate became unbearable.

His was a courageous stand, especially for a 17-year-old. Yet, for someone with his upbringing, there was no other choice. “I was born to parents who lived out their ideals,” he said, and they expected the same of their children.

As Wittkamper remembers it, the principal called a special preterm meeting and told students, “We’re going to have some black students this year. You don’t have to be their friends. I just don’t want any violence.”

Wittkamper feels that the implicit message was that hostilities would not be punished. Thus, the car that transported him and David Bell, Robertiena Freeman, Dobbs Wiggins and Jewel Wise to Americus High was greeted with flying rocks and dirt, and chants of:

“What are you doing here?”

“Go back to your school.” Now a pariah, he didn’t socialize with his peers or play team sports. “The thing that saved me,” he says, “was doing all of the above on the black side of town — from dating, to attending parties, to participating in mass-movement civil rights meetings.

“I missed out on the trivial parts of a typical high school existence but gained on the parts where you find meaning in life.”

The Class of ’65 is a story about redemption, reconciliation and the power of forgiveness. Had he been born to different parents, Wittkamper figures that he’d probably have embraced the same beliefs as his tormentors. He figures most of his classmates, for whom he feels empathy today, “were decent people with decent parents who were scared into submission to avoid social suicide.”

It’s a measure of his Koinonia upbringing that he is bemused by the attention The Class of ’65 has brought him. “Besides showing up,” he says, “I don’t feel I did that much.”

A excerpt of Auchmutey’s interview with Wittkamper’s classmate, David Morgan.

Auchmutey and Greg Wittkamper will speak and sign books on March 31 at the Carter Center.