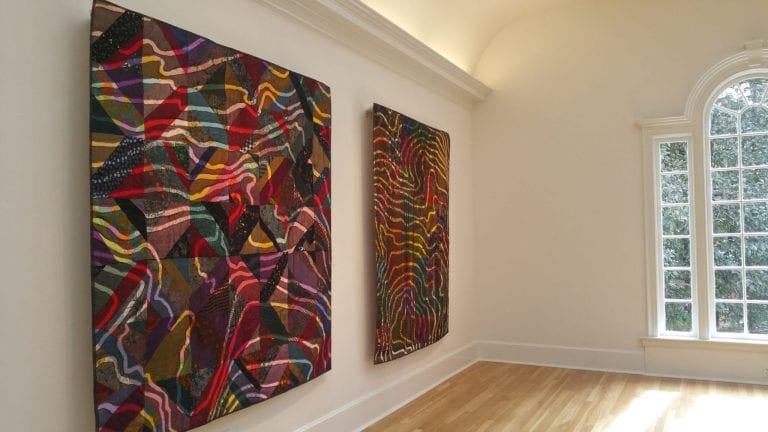 “Artists Jess Jones and Lillian Blades are highly informed by the tradition of quilting and craft . . .”

So the wall text tells us in a new joint exhibition by the two Atlanta-based artists at the Swan Coach House Gallery through February 17. But similarities between the artists pretty much end there, and a viewer might even come away from the show concluding that this proffered parallel is itself a bit faint, even something of a stretch. No matter. Divergence between artists can make for a better and more compelling show than dreary old confluence, and that’s the case with Jones’ Mixed Use and Blades’ Gaudi Ju-Ju, where even the titles seems to come from different planets.

Quilting and craft are easy enough to identify in Georgia State University professor Jess Jones’ work in which she restitches found quilts and overlays them with topographical contour lines. Jones scours local thrift shops for vintage quilts, stitches them together into new patterns and then dyes them so they show a contour map of the historic neighborhoods they’re possibly from. The artist has a removed but not entirely impersonal relationship with the object’s anonymous original maker. In giving the displaced object new life, Jones doesn’t just continue with the process of quilting a textile, but adds in a literal depiction of the rapidly gentrifying Atlanta landscape. It’s a consideration of the divisions of geography and by extension time, neighborhood, and likely race and class, that divide the creators who participated in the traditionally communal, social craft in its now profoundly distinct stages.

The quilts are given the names of the depicted geographic area, most often a place evocative of rapid, even contested, change: Topoquilt: Krog Street Market or Topoquilt: World of Coca-Cola. Peoplestown, Inman Park, Turner Field are likewise shown here. Fabric patterns coexist with geographic patterns; in a dream-logic way, they seem to always have belonged together. One inevitably thinks of the question of “everyday use” as it applies to craft, especially given the show’s smashingly fitting title: Mixed Use. Many traditional quilts, made out of necessity from disused scraps of fabric and intended to serve a distinct practical purpose, now hang, like these, as art objects on walls. A quilt nonetheless will always be associated with the physicality of the body, with its more humble, quotidian life. Even when it’s presented to us flat on a wall, we still picture it undulating with the contours of a sleeping body underneath, especially when contours have literally been traced on its surface. Jones’ process may be a singular one, but it’s compelling because the narrative here has such familiar, universal elements — bed and blanket, needle and thread, public and private, linked, as they likely always have been, to the changing places we see every day.

Even the small number of works in Lillian Blades’ exhibition reveals that her process is more informed by assemblage and collage than by quilting or craft. For her, objects seem to have an interior life and spiritual power as they do in many folk beliefs, an outlook she seems to approach with an equal measure of boisterous playfulness and quiet reverence. The strongest and most aesthetically cohesive piece is Fossil. Its jumble of seashells, picture frames, and bric-a-brac atop a dreamlike, mottled blue background have a mysterious but satisfying structure. Each individual object, with its vintage veneer, evocative particulars and baroque or kitschy detail contributes to an immediate, overarching impact but also extends a quiet invitation to explore the abundant peculiarities, a testament to the artist’s fantastic eye. But strangely, this best work is actually less inventive than the aesthetically more adventurous Ju-Ju Veil, with its frozen downpour of objects that begins, antithetically, with burnt wood. The wood in its final stages of existence seems to transform as it descends into a curious and nonsensical collection of evocative objects (there’s a toy Yoda in there; the things here are stranger, less predictably artful than in Fossil). Other work in Blades’ show, such as a Fabergé-style egg constructed from found stained glass or a clutter of empty brass frames forming an undulating wall sculpture, play with similar tensions as the two central and largest pieces. However, I was less enthralled by works like Otito or Ju-Ju Veil that make explicit reference to traditional folk beliefs or cultures. In the end, it’s easy to see, as with Fossil, that the most powerful spell here is entirely Blades’ own.

Like Jones, Blades works with the strange life and implied history that attend found objects, seeking new energy by placing them in new contexts. For Jones, the most intimate and personal item, a blanket for covering the sleeping, dreaming body, can also become the ground for limning out a dispassionate, topographical view of real space; it’s a strange, dynamic intersection that seems simultaneously inventive and intuitive. In Blades’ work, familiar objects like picture frames, sea shells, bits of colored glass and beaded belts are placed in dreamlike stasis, stripped of context, but, as in a dream, seemingly ripe with meaning and portent. The satisfaction in this unusual pairing comes, not in seeing that the two artists’ paths are parallel, but that the paths can be so wildly different.