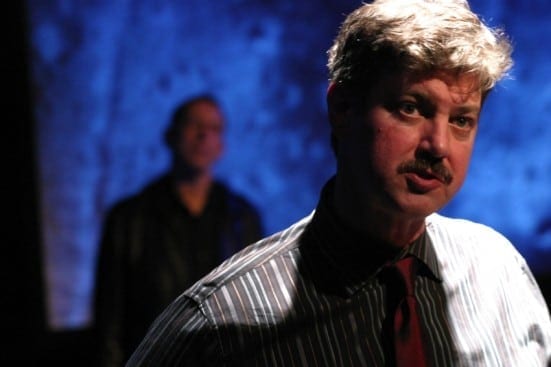 It never entered Jeff Perry’s mind as he and his colleagues were dabbling in drama in Chicago in the early 1970s that they would go on to create one of the most respected theater companies in the country. Along with Gary Sinise, Terry Kinney and H.E. Baccus, Perry co-founded Steppenwolf Theatre Company. The actor had no idea, either, that he’d find instant fame one day as White House Chief of Staff Cyrus Beene in television’s wildly popular Scandal.

Taking a brief break from the TV grind, Perry is directing Keith Huff’s A Steady Rain, running at the Alliance Theatre September 18 – October 11. It’s his first time working in Atlanta.

It’s not, however, the first time he has mounted the show. He did it first at the Odyssey Theatre in Los Angeles last year. “We were having a blast and we wanted to keep doing it,” he says. “I sent out some messages in a bottle to artistic directors and Susan Booth and Minneapolis’ Guthrie Theater both responded positively and it led to this.”

A Steady Rain is the story of two Chicago cops and a series of violent events over one summer. The characters have been friends since they were children, going to Catholic school and church together. Joey (Thomas Vincent Kelly) is trying to clean up his life and his policing, while Denny (Sal Viscuso) is a die-hard committed to the most pragmatic way of being an officer.

It’s also an exploration, Perry feels, of male friendship. “Strain has entered into the relationship between these two,” he says. “The events of the summer alter their lives and understanding of the world they inhabit.”

Perry admires the play’s unorthodox structure, with its shifts in points of view and a bouncing chronology. On Broadway in 2009 Hugh Jackman and Daniel Craig took the lead roles and Steven Spielberg has long been rumored to want to direct a film version. It was in high school in Chicago that Perry and his friends took to theater. “We were a bunch of kids who fell in love with it,” he says. “Gary Sinise and I met in high school, then I went off to Illinois State University, and Sinise started a community theater version of Steppenwolf.” In college Perry met the likes of Kinney, John Malkovich and Laurie Metcalf, to whom he was married at one time. By the time they were all nearing graduation, Sinise was nearing the end of his community theater experience.

“We decided to extend our adolescence as far as we could,” Perry recalls. “Gary found a basement theater; we found day jobs and continued to work with the people we wanted to and do the shows we loved.” By 1974, Steppenwolf had begun. In the early days, though, the actors onstage sometimes outnumbered audience members.

For a while he stuck with theater. Perry was in the original Chicago production of Tracy Letts’ August: Osage County as well as the Broadway version. It was one of the signature experiences of his life.

“There was a point early on in rehearsal in Chicago in the original production during the second act extended family dinner scene,” he says. “I looked around at the table and some of these people I’ve known for 20, 30 years. Between this amazing writing — I think it’s the truest and most home-grown piece of ensemble writing ever — and the amount of time this group has had together, I said if we can’t do this, we are idiots.”

Eventually, he branched out to TV with series such as Nash Bridges, and a part as a gay drama teacher on My So-Called Life, another role he cherished. He has fond memories of that short-lived show, especially how the creators and producers were able to portray high school life so accurately and how adept newcomer Claire Danes was. “I met her and thought this young girl is off-the-hook amazing. I was in my mid-thirties at the time and had been at it since I was 14 or 15. Claire’s talent was so incendiary. It was inspiring and disheartening. I thought to myself — why do I even practice?”

Fast-forward to 2015 and he is in the fourth year of Scandal. “Those experiences have brought me to a place where I love both equally,” he says.

Little did he know that Scandal would turn into the pop culture phenomenon it has. He compares it to crack TV. “When we watched the first couple of episodes as superstitious showbiz folks with my wife Linda Lowy (the casting director of all Shonda Rhimes’ TV shows) at Shonda’s house, I was leaning forward,” he says. “I couldn’t wait to turn the page. It’s political thriller meets great drama meets soap opera. As to how the audiences would react, you never know. You roll the dice and hope their reaction is similar to yours.”