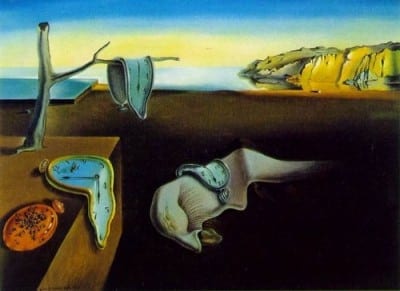 Just before intermission during the Lincoln Center Jazz Orchestra’s Saturday night performance at Symphony Hall, saxophonist Ted Nash and trumpeter Marcus Printup broke away from the 15-musician big band. The duo moved upstage to perform a Doppler-esque bending of time in “Dali,” the second movement of Nash’s “Portrait in Seven Shades.” Nash echoed Printup’s stratospheric trumpet bursts on his alto, a nearly pitch-perfect, Simon-says feat that devolved into avant-garde wiggling of the fingers followed by, of all things, a cowbell solo by drummer Ali Jackson. 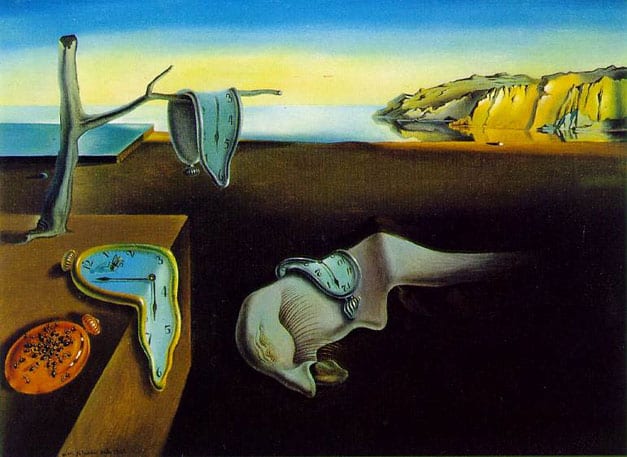 Nash’s seven-part composition premiered in 2007 and is based on paintings in New York’s Museum of Modern Art. A who’s-who of painters is represented in the suite: Monet, Picasso, van Gogh, Matisse. To portray some of the artists, “Seven Shades” introduces techniques not usually played by this ensemble, which is known for a strict adherence to historical jazz styles. In a spoken introduction to “Dali,” Nash explained that the painter’s “The Persistence of Memory” (above) — think Surrealism and melting clocks — creates a “certain sense of discomfort” by placing commonplace objects in extraordinary surroundings. In the tune, Nash called for extended techniques to create this disconnect.

The orchestra, led by trumpeter and jazz-classical-Americana composer Wynton Marsalis, has deep ties to Atlanta — and he’s been here a lot in recent months. Printup and trombonist Chris Crenshaw both grew up in the area, and saxophonist Walter Blanding Jr.’s mother, singer Audrey Shakir, calls the city home. When the orchestra swings through Atlanta, it’s always somewhat of a homecoming. A year ago, Marsalis invited local players onto the stage to take a few choruses with the ensemble. 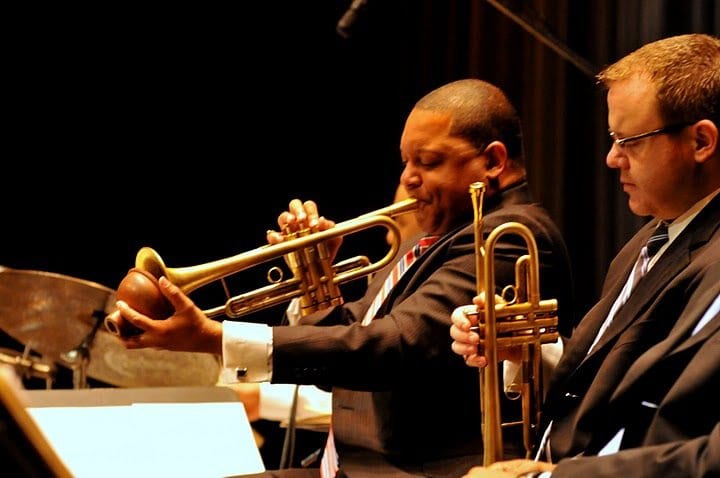 I went into Saturday night’s concert expecting the same connection with the local musicians I witnessed last year, a bonding that led Marsalis and some of his bandmates, long after that show, to the Star Bar in Castleberry Hill to sit in with singer Kemba Cofield. Unfortunately, a local presence wasn’t visible this time around. (Band photos by Ernest Gregory, shot during the current national tour.)

Marsalis’ manner here was a lot more laid back than the last time I saw him, in January, giving a tentative bow as the sheepish composer of the “Blues Symphony.” The Atlanta Symphony
Orchestra apparently won’t return to it, and the Boston Symphony canceled its performance scheduled for later this year. Coming up in June, Simon Rattle and the Berlin Philharmonic are planning their own Marsalis world premiere, although a source says he’s still nowhere near completing that score — and now he’s back on tour promoting “Seven Shades.” You have to wonder whether he has rather overcommitted himself. 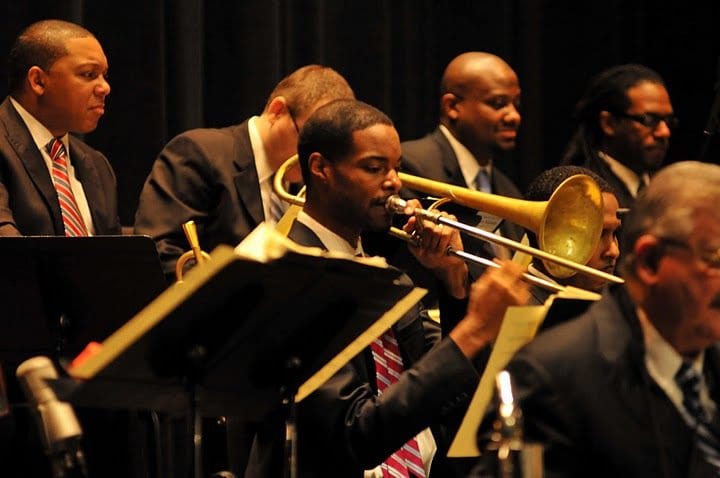 On Saturday, the orchestra adapted to the cavernous Symphony Hall by front-loading the concert with a few Count Basie classics, a composition by guitarist Bill Frisell and a Chris Crenshaw-penned tune. Nash’s series of “Seven Portraits,” which were getting their first airing in Atlanta — and are just out on CD — were next on the bill. But the group made an interesting programming choice by separating this multi-movement work across a set break. After the first two Nash “portraits,” the house lights came up and everybody went out to the lobby. While each tune in this composition can stand on its own — in much the same way Marsalis and company will play snippets of his concept works “Big Train” and “City Movement” — inserting a 15-minute break after the second movement squashed any momentum the piece had developed. Just as the orchestra started really moving, it took a break, and that zapped all the energy from the room. 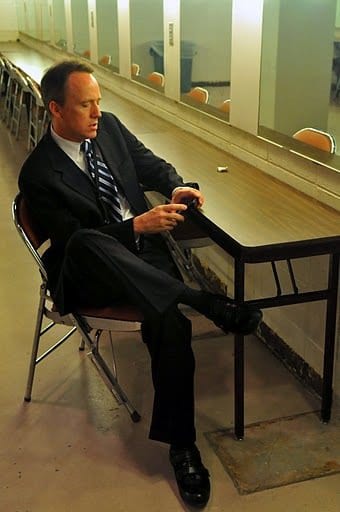 Nash’s contribution to the band’s canon is uneven. Before it launched into “Pollock,” the last entry in the walk through MOMA, Nash (at left) explained that he used the piano as a canvas and, emulating Pollock’s painting style, “dripped musical phrases.” It certainly sounded like that — in a good way — until the piece switched to a slow blues, because Pollock was a fan of blues and swing music, Nash had explained. While featured trumpeter Ryan Kisor handled the abrupt change in feel admirably, this was a compositional misstep in a solid work.

When Marsalis himself ventures into classical music, as in “Blues Symphony,” he tries to create massive compositions with multiple branches, when a simple, properly formed idea could work just as well. The composers in the Lincoln Center Jazz Orchestra, like Nash, follow his lead. “Seven Shades” was a nice change of pace from the start of the program, and its inclusion of “modern” sounds helped produce nice, succinct solos from the musicians. But some sections could have been cut without much harm.

Marsalis played the ringleader early in the night, introducing tunes with please-the-audience asides that helped forge a connection between orchestra and listeners. But the trumpeter took a back seat at this concert, offering only two solos — both a little long and indulgent — and generally looking pleased to let someone else take the orchestral reins. And then the concert was over as quickly as it started. Marsalis was heralded with a riotous standing ovation; Nash, the breakout composer of the evening, was given less attention.

While Marsalis is still the face of the ensemble, in the last few LCJO concerts I’ve seen, he is functioning more like a bit player and letting his assembled compatriots become the stars. If Saturday night was any indication of the group’s changing face, giving composers like Nash more latitude is a step in the right direction.