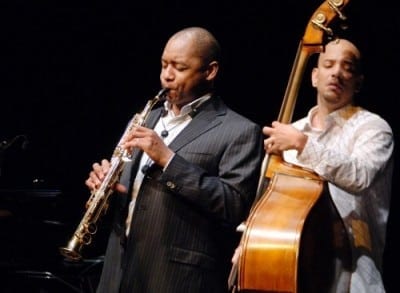 With the onslaught of new students who descend upon area colleges every fall comes a new wave of performing arts programs. Georgia Tech, Georgia State University, Emory University and Clayton State University all have recital halls and other event spaces on their campuses, and these institutions enhance the jazz offerings in Atlanta. The 2010-11 school year will be a good one for straight-ahead jazz fans. Two titans of the tenor saxophone will visit metro Atlanta this fall: Joshua Redman (photo below) at Clayton State’s Spivey Hall in October and Branford Marsalis (above) at Georgia Tech’s Ferst Center for the Arts in November. A third tenor saxophonist, Joe Lovano (bottom photo), will perform with the GSU jazz ensemble at the Rialto Center for the Arts in April. But the year won’t be all about saxophones; trumpeter Jon Faddis’ Jazz Orchestra of New York, jazz master Roy Haynes and the revolving cast of the SF Jazz Collective are just a few of the other musicians who will make the trek to Atlanta.

Local performance options for big-name jazz artists, who command hefty fees, are limited when school is not in session. Well-known musicians might find performance spaces at the High Museum of Art during its Jazz at the High Series or at venues as diverse as the King Center and Symphony Hall. But for the most part, owners of the many smaller venues around town can’t afford to fly in the big guns. “Sometimes these performers get so big that they have to play larger venues because their price tag gets so high,” said George A. Thompson, the new director of the Ferst Center. During his first year of programming at the venue, Thompson maintained Ferst’s strong connection to pop jazz — David Sanborn, Peter White and Mindi Abair, and Eric Marienthal are all slated to perform — while mixing in Marsalis and Faddis.

At the Rialto, director Leslie Gordon works with Gordon Vernick, GSU’s director of jazz studies, and checks in on other presenters in the region when devising each season’s schedule. She tries to pick a few up-and-coming artists who aren’t yet widely known, and she carefully selects one artist each year to perform with the student big band; that musician will also spend a week giving master classes and teaching. “I believe that we supplement the offerings of the clubs, restaurants and societies,” Gordon wrote in an email. “We work closely with WCLK [radio] and enjoy a warm relationship with other venues. We love the fact that the city of Atlanta hosts a marvelous jazz festival and that Churchill Grounds is such a well-known space that our jazz musicians always want to go there and jam after their shows here.”

These concerts enhance Atlanta’s reputation as a jazz city, but they are aimed primarily at music students of all ages. As Lovano will do at GSU, most of the artists teach master classes that are open to the public. These performances are usually free and present them in a more casual environment than a concert.

“Yeah, we want to break even; yeah, we don’t want to go in the red, but that’s not the main purpose,” said Thompson, of the Ferst. “An independent presenter is out there to make a profit. We have a broader-based mission; part of that is education — education of the students and education of the surrounding community.”

For those of you keeping score at home, here’s a little clip-‘n’-save chart I made of Atlanta’s 2010-11 college jazz season.