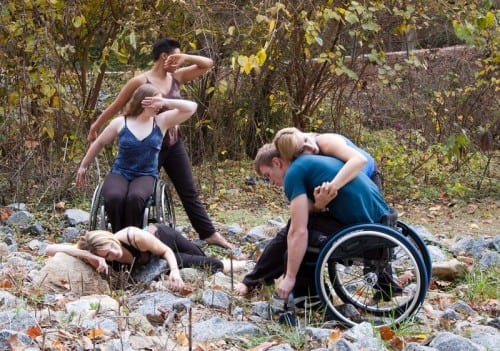 For the past couple of years, the Atlanta dance scene has been accelerating toward an unknown destination with mounting enthusiasm. If January’s crowded dance calendar foretells the year to come, it seems that the city’s modern dance companies are raising the bar on inspiration and dedication.

Brooks & Company Dance will present “Into the Dark Wood” January 5-7 at the Balzer Theater at Herren’s. It will be the company’s first full concert since Artistic Director Joanna Brooks began film school in Savannah last fall, and Assistant Director Kristyn McGeehan’s first evening-length production as choreographer and director. The startling dance-theater collaboration will explore three dark fairy-tale characters whose stories involve an eerie mixture of love, power, death and greed.

The first character is pulled from Hans Christian Andersen’s tale of the Ice Queen, a woman who uses magic to separate two young people in love. With choreography to Italian composer Ludovico Einaudi’s music, the Ice Queen represents a cold, heartless perfection that conveys a darker cruelty. The second character is the haggish, witch-like Baba Yaga, taken from Slavic folklore, who ruthlessly seeks power as she crawls and rolls to music by Vassilis Tsabropoulos and Anja Lechner. Mr. Fox, from the Brothers Grimm, is a seductive menace and the darkest, most modern villain yet. Performing to the tunes of Miles Davis, Rachel’s and Medeski Martin & Wood, Mr. Fox hunts females in an attempt to use their various parts to build a perfect woman.

McGeehan explains that the wooded setting in these stories represents “the places you fear to go alone.” With the help of local writer Laurie Zolkosky and singer Angela Pearl, she merges characters and set with live vocals and theater. McGeehan hopes that this blending of the arts has “not only woven the tales together, but given the audience a doorway into the piece.”

Crossover Movement Arts will also blend mediums when dancers Blake Dalton, Maryn Mills and Erin Weller Dalton perform with spoken-word poet and singer-songwriter Kodac Harrison January 13-14 at 7 Stages. The event will celebrate the release of Harrison’s new album, “In Too Deep (1984-2004).” Harrison describes the event as a giant abstract painting in sound and motion that gradually discloses connections between seemingly disconnected elements. The choreography, featured between spoken-word and musical presentations, will be improvisational and will likely combine abstract, pure-movement concepts with grounded physical encounters.

Also January 20-21, Full Radius Dance will celebrate its 20th anniversary with four performances featuring Artistic Director Douglas Scott’s “The Path Beyond” and “Thrift,” as well as a new work by dancer, filmmaker and choreographer Onur Topal-Sümer.

Full Radius is known for incorporating dancers in wheelchairs into its work. With exceptional creativity, the troupe provides audiences with a specialized glimpse of strength, power and trust. Scott’s “The Path Beyond” was inspired by Ellen Kushner, host of the public radio program “Sound and Spirit,” who said, “It is a blessing to live through something, to escape the body’s or the spirit’s destruction.” But Kushner asks, “What about those you left behind — the ones that didn’t make it?” Also on the program, Scott’s “Thrift” is a tribute to Merce Cunningham, and Topal-Sümer’s currently untitled work considers superstitions, or beliefs that are not based on reason or knowledge.

On the same weekend, January 20-21, Gathering Wild, a modern dance company with a strong jazz bent, will present “27,” a retrospective on rock music icons Jim Morrison, Jimi Hendrix, Janis Joplin and Kurt Cobain, all of whom died at age 27, at Fabrefaction Theatre. Conceived by Artistic Director Jerylann Warner and visual artist Rachel Jackson, with additional choreography by Charles “Bubba” Carr, Daphanie Scandrick and Corian Ellisor, “27” honors the four musicians with movements based on their struggles and triumphs