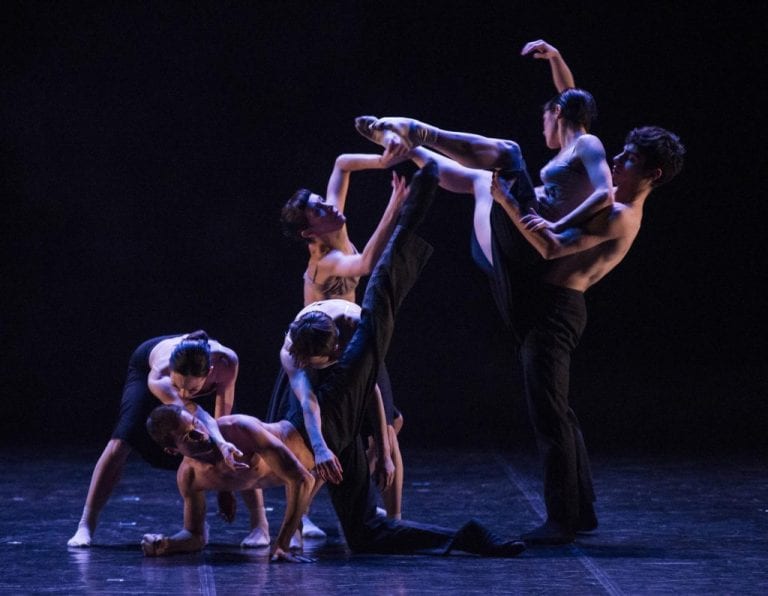 Inspiration can come from the strangest sources, and for Mauro Astolfi, it came from a dance rehearsal in an Italian park under a full moon.

Astolfi founded Spellbound Contemporary Ballet in Italy in 1994 and has forged a highly acclaimed company that puts a premium on classical movement set to modern esthetics. Spellbound makes its Atlanta debut at Kennesaw State University’s Dance Theater on October 12 and 13 with a performance of their original piece Full Moon.

The creation of Full Moon came after Astolfi read articles about how the moon can affect human behavior. “That was the starting point,” he said recently by phone from his studio in Rome.

For several nights, he took his dancers to a park in Rome to improvise under a full moon. “We did a lot of experimenting and monitored our perceptions and emotional states,” he said. “We discovered we had more adrenaline — we didn’t feel tiredness or pain. For me, dancing under the full moon was like dancing with a power pack attached to my body.”

Astolfi said he hopes the ballet recreates this feeling for audiences. “Try to imagine you are under the full moon, even if you are just watching the dance,” he said. “The full moon is a ‘reawakening’ of our intuition, the feeling you get ‘in your bones’ that what is happening is something important, when we understand what we need to let go of.”

“We see a lot of Gaga-influenced work these days,” said Ivan Pulinkala, interim dean of Kennesaw’s College of the Arts and founder of the Department of Dance, referring to the popular movement language developed by Israeli choreographer Ohad Naharin. “It too has a lot of detail and texture, but with Spellbound, the detail is standing firm on classical training.”

Pulinkala said he finds Astolfi’s work unusually compelling. “His movement language is quite beautiful, very intricate and with real depth,” Pulinkala said. “It’s very contemporary but not without technical substance. The texture and level of detail are quite unique. It’s a beautiful model to bring to our students and, more importantly, to the city of Atlanta.”

The Full Moon score lends itself to the intuitive state that Astolfi is reaching for with his piece, with ambient music by composers such as Ryuichi Sakamoto. One of Sakamoto’s pieces, also titled “Full Moon,” asks listeners to contemplate how many moons they have left in life. It’s something Astolfi thinks about a lot these days: “I’m 56, but sometimes I look and feel 95,” he said with a laugh.

Astolfi came to the US when he was 16 and trained in New York for several years before auditioning for the Paul Taylor Dance Company. A back injury, however, made it impossible for him to join the Taylor Company or any other professional ensemble. He did short-term gigs in New York, Los Angeles and San Francisco before having surgery and returning to Europe. That’s when he founded Spellbound. It is now one of the foremost dance companies in Italy and tours frequently in Europe and Asia, Russia and Israel.

Spellbound is only the second international company to perform at the new KSU Dance Theater, but it won’t be the last. Pulinkala plans on booking one international ensemble every season.