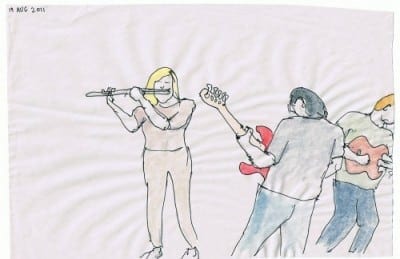 Improvisation lies at the heart of music, and, in the words of Derek Bailey, “improvisation is present to some degree in almost all musical activities.” Before any piece of music is composed, it is imagined, and imagination and improvisation are siblings if not twins.

The Invent Room Pop series grew out of the venerable Kirkwood Ballers Club, now legendary as an incubator for Atlanta musical explorers. While that 20-minutes-on-stage free-for-all thrived for years in multiple venues, “the scene that supported the original incarnation of Kirkwood Ballers doesn’t exist any more,” says Robby Kee, Eyedrum’s executive director, and this led to the Invent Room Pop series. 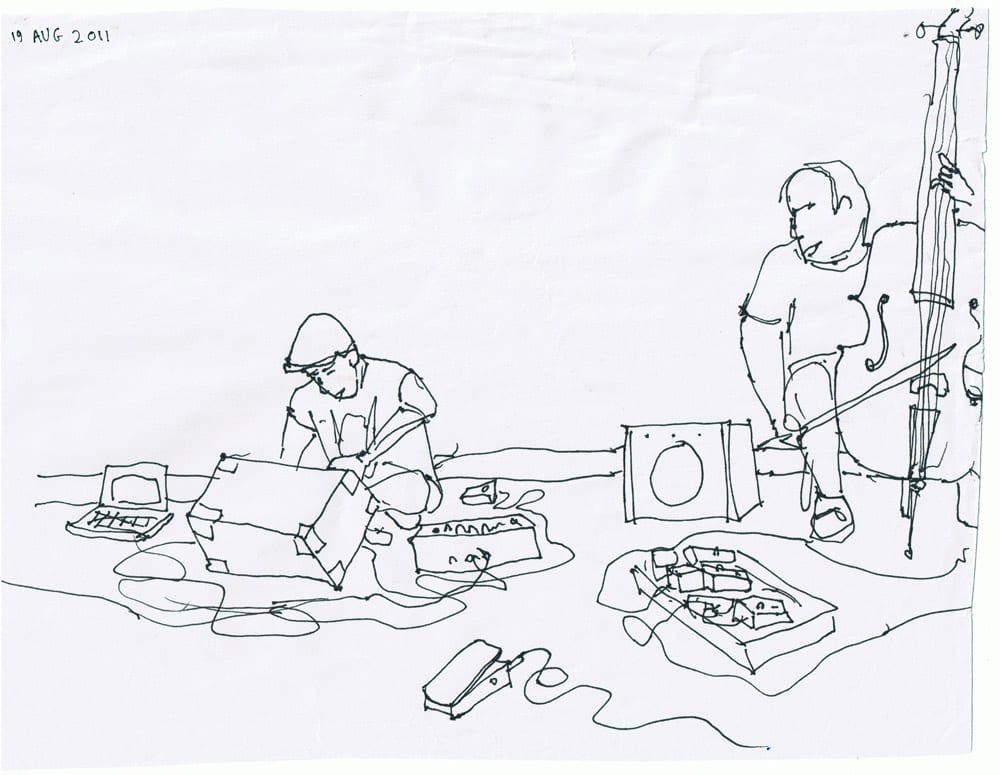 Curated by Kee and held at Beep Beep Gallery on the third Friday of each month, the series throws together six local musicians, from whom randomly chosen duos and trios perform five improvisations. While largely free in form, it has some nuanced edges. Recognizing the dude-heavy nature of local experimental music, Kee requires each complement of musicians to include two women. “It changes the whole dynamic of the shows and has made them a lot more interesting,” he said.

The series is intended to create unexpected companionship and results. “One of my overall goals for the series is to introduce people from different musical circles in hopes that they start new bands,” Kee explained. In this, too, the series resembles Kirkwood. For years, with few local venues for experimental music and noise, players had few means to meet, connect and form groups.

I’ve attended a couple of installments, and they are loose-fitting events, part awkward blind date and part falling-in-love musical conversation. The musicians are pulled mostly from the youngish indie-alt-rock and noise crowd, but with attention to mixing surprising elements — which I hope widens and continues. One goal is to prevent the series from turning into a bunch of guitarists leaning on distortion pedals, or the standard guitar-bass-drums band.

This past Friday featured Chris White of Magicicada (electronics), Matt Jarrard of Oryx & Crake and Book Club (space cello, or cello plus digital delay), Jared Stapleton (guitar), Aaron King of el Fossil (guitar), Jessica Sherwood of Sonic Generator (flute), and Danette Haser of Akuyou (voice). Arriving just after the scheduled starting time, I found the room mostly empty, containing only the organizers and (most of) the musicians. “It’s not starting ’til the beer arrives,” I heard several times. That was the primary delay. Second was the absence of the gallery’s owner, who knew how to operate the lights. 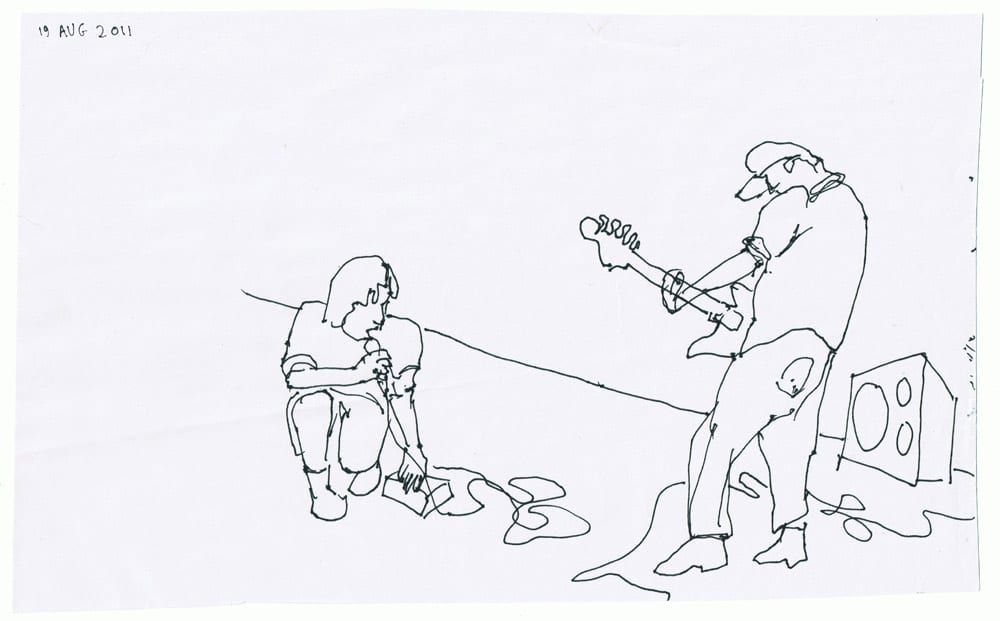 Across the messy gallery space were five clear musician zones: guitar amps, a cello and chair, many, many effects pedals strewn about, as well as White’s ubiquitous sprawl of devices. While waiting for the beer, owner and audience, I chatted with talented local musician Klimchak about improvisation. Klimchak plays innumerable percussive instruments, the theremin and quite a few other things besides, and he composes music for the Center for Puppetry Arts and Georgia Shakespeare.

I was surprised to hear that he believes the mind operations behind composition and improvisation are completely distinct. “If I had an EEG connected to my head, you’d see entirely different areas of my brain lighting up while composing than while improvising,” Klimchak declared.

The appearance of certainty is, for me, an invitation to inquiry; I wondered why he felt that the mind-set of a musician differs with the two activities. While I think there is a clear difference between performing a piece of composed music and performing something improvised, to my mind the aspects that inform composing are very similar to those that guide improvising. In each case, an emotional/mental/physical action occurs at each instant, as music is revealing itself, and the composer/improviser chooses where to go. Improvising leaves far less time to consider the options. In a typical composition, rejected ideas are never heard: in improvisation, everything gets heard.

It is this high-wire, no-net quality that gives musical improvisation some of its thrill, for performers and listeners alike. When the performers soar and flip in mid-air and coolly toss one another about, the crowd goes ahh. When they fall, however, and fall into static jamming, the crash is audible.

Last Friday’s performance had some of both. The initial grouping paired Chris White with Matt Jarrard. Both were concerned about the overly bright lighting, with White scaling walls and unplugging things trying to get a more soothing ambience. That failing, they got down to music in a direct fashion, White bringing out an expected drone base, building with Jarrard’s space cello to an ostinato passage. A period of wobbling followed, a delay loop area with a broad sense of space. It was an easy-listening opening salvo, a room warmer, and also typical of first-time duet improvising: both went to familiar places. 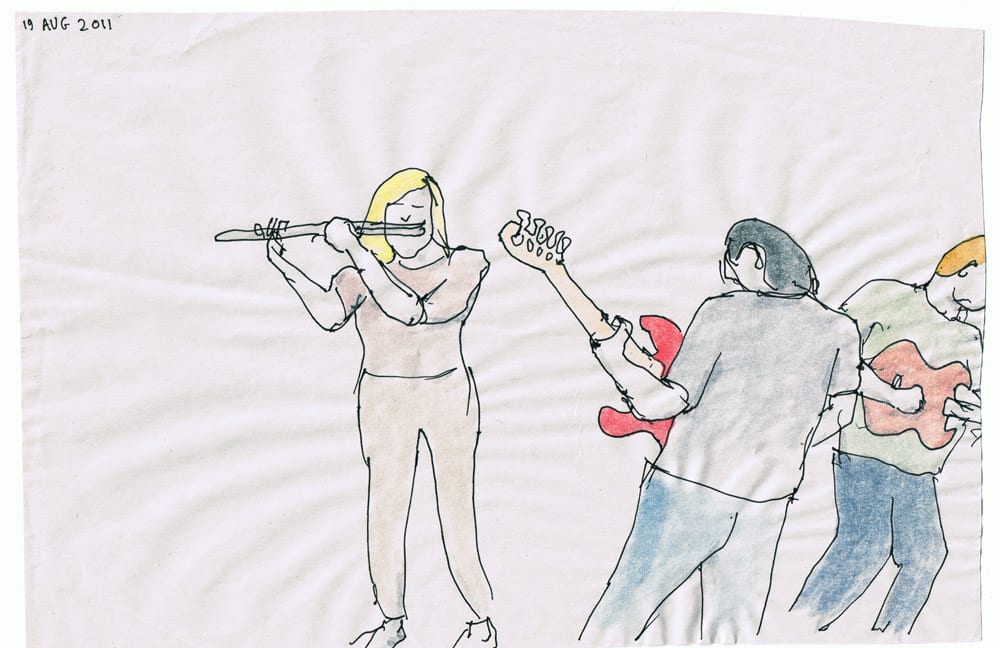 Improvisation No. 2 put together two guitars and a flute (Stapleton, King and Sherwood), leading to some uncomfortable moments. While the flute wanted to play lyrically, one guitarist was stuck between two chords, while the other, with his back to the other musicians, leaning over his effects pedals, made train-like noises through a long delay. Delay pedals (and special effects generally) are a terrible crutch to improvised and experimental music. In a later improvisation, I was pleased to hear a “no delay” rule called out.

Sherwood was brave to throw herself into improvising with electric, amplified musicians. She should have had a microphone herself, since the loudest that a flute can play is peep-quiet next to a guitar amplifier, and the loudest flute playing can only sound shrill. She gamely tried to keep up, but the gradual rise in volume from the guitarists, in addition to obscuring the flute, couldn’t hide the lack of ideas from this grouping.

Vocalist Haser was next paired with King, and the presence of a singer probably (and thankfully) shut down continued amorphous and inchoate attempts. They started out with a noisy, punkish caterwauling, until, alas, the guitarist again grew louder and louder, off on his own trip, until the vocal was overwhelmed. In a duet improvisation (or any duet), playing so loudly as to render it a solo is, to me, unforgivable. Group improvisations are built by listening to others. In Bailey’s words again, “[T]o improvise and not be responsive to one’s surroundings is a contradiction if not an impossibility.”

I think that improvisers are sometimes shy about doing something standard: song structure, fixed rhythms, melodies, harmonies. The fourth improvisation, between White and Stapleton, started right off the bat with unapologetic, stridently hard-rock power chords. Simplification served the duo well. White nimbly shifted from the beginnings of electronic drone to — picking up a microphone — screeching cock-rock vocals. This was fantastic, a great lift to the energy level in the improvising.

Throughout the evening, the general level of confidence rose. “I [only] wish we could have gone longer….,” White lamented. “It seemed like the dialogue was just beginning when we cut the conversation.” Also, the musicians seemed to grow more comfortable with letting one another have audible space, the worry fading that, to the audience, silence might equate with a lack of ideas. 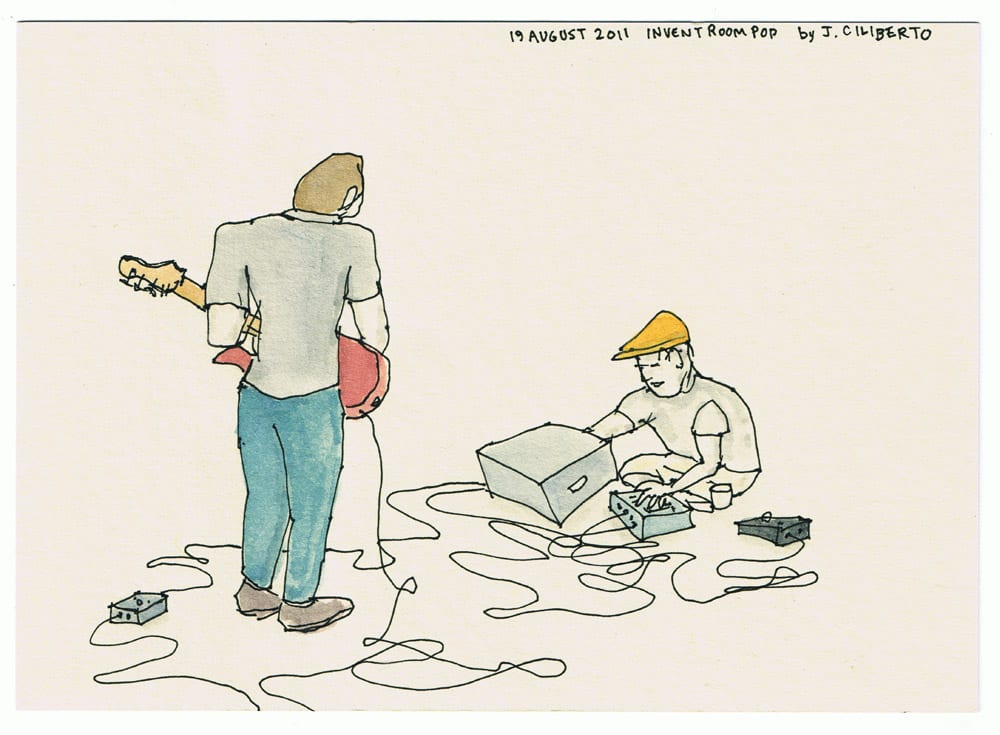 The final improvisation of the evening, a trio of cello, voice and flute, was dark, quiet and moody, with a continual pulse rhythm generated by some bow noise from the cello, delay-looped. Although the words were hard to discern, the tone and delivery was spot-on to the music, and the relative quiet of the cello and flute allowed the voice to reside in various zones, not just the screaming required against amplified guitar. The whole room seemed to fall into the slightly haunting, very nicely connected trio sound.

One thing I notice about improvisation is how much more taxing it is for the musicians than the audience, when compared with composed music, and much more so when the improvisers are unfamiliar with one another. Put another way, there is a bonding quality that occurs when improvisers get together that seems significantly greater than when composed music is performed. I suppose this is completely unsurprising, because improvising musicians have nowhere to turn but to one another, while those performing a score can bond both with it and with one another. For improvisers, this forced camaraderie takes many forms: shy awkwardness, thoughtless chattering, delight in having someone to play with, mutual learning, sharing of ideas, finding new places to play together.

In contrast to this facing-inward aspect of improvising, the presence of an audience places immediate pressure on the performers, and thus the audience plays a far greater role than in the performance of composed music. Musicians are social animals, far more so than writers or visual artists, something that is obvious from the collaborative possibilities. The final improvisation expressed this well, and after the last applause, the trio continued chatting about the piece, while I heard Kee and Nathan Brown, discerning promise, wondering aloud whether a band might form out of this grouping.

Later, as the audience filtered out, with the former strangers grouping in twos and threes, I saw them trading musical war stories from the road, suddenly close in an unexpected way, a bit like basketball players joined in a pickup game, previously strangers, chatting together after a win made possible only by teamwork and thinking on the spot.

The next installment of Invent Room Pop, at Beep Beep, will be on Saturday, September 17, instead of Friday, to avoid a scheduling conflict. The lineup is pending.