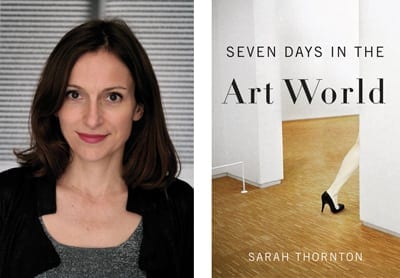 The ArtsATL Q&A: Sarah Thornton, author of “Seven Days in the Art World”

The Savannah College of Art and Design’s “deFINE ART” program brings a great slate of speakers to Atlanta this week, among them performance artist Marina Abramović, Metropolitan Museum of Art curator Gary Tinterow and author Sarah Thornton, whom ArtsCriticATL interviewed about her 2009 best seller “Seven Days in the Art World.” (Details and schedule on SCAD’s website.) Sociologist Sarah Thornton’s “Seven Days in the Art World” is a whirlwind tour around a clannish world that can feel both familiar and weirdly exotic, suggesting both a rarefied version of high school and the most anxiety-laden industry going.

Over the course of the book, Thornton dips into a number of archetypal art habitats. She offers a keyhole view into a graduate school critique at conceptual art hotbed Cal Arts. Safeway cola and chocolate chip cookies are served, and a student knitting during the crit takes pains to explain that her knitting is only a hobby, “not a work.” At Artforum magazine’s offices, publisher Charles Guarino says that 95 percent of contemporary art cannot be taken seriously.

Thornton fluctuates between breezy, astounded outsider and astute, clued-in insider during her fascinating tour, a direct result of the kind of front-row access that only sharing a drink with John Baldessari at the Venice Biennale or eating sushi with curators in Tokyo can afford. Among the revelations large and small: big-name art critics Roberta Smith and Jerry Saltz are married; auctioneer Christopher Burge has performance anxiety dreams before he mounts the Christie’s podium; and the value of works by female artists is still diminished compared with those of their male peers.

ArtsATL: Your book “Club Cultures” was also about insiders with their own codes and behaviors. If the art world — granted as you show in your book that it is many interconnected worlds — is its own subculture, what would you say are its key defining characteristics?

Sarah Thornton: I see the art world as a cluster of squabbling subcultures that have a measure of hostility toward one another. The subcultures are unified by a belief in contemporary art. How that belief manifests itself varies. Some buy and sell it, others write about it or create exhibitions with it.

ArtsATL: When the book came out, did you experience any anger or disagreement from art insiders over your portrait of their world?

Thornton: I experienced some anger, but little disagreement. I wanted to be accurate and fair without indulging people’s vanities.

ArtsATL: Your book may have captured the art world’s last great hurrah. How do you think the recession will play out long term for the arts?

Thornton: Remarkably, the worst of the recession is over, at least when it comes to the art market. Unfortunately, governments around the world are cutting public spending on the arts. It’s unclear how this will play itself out. In the UK, for example, the budget details have not been announced yet.

ArtsATL: Did you end up becoming a collector or regular art-goer after writing the book?

Thornton: My mother studied art history and has been a museum docent in every city in which she has lived for decades (she now volunteers at the High Museum), so I was a museum-goer from a young age, even if I was never part of the art world. Now I write regularly about artists and the art market for The Economist, so I continue to work on/in the milieu. I have intellectually stimulating stuff on my walls, but I am not a collector.

ArtsATL: What was the most distasteful part of the art ecology?  And what was the part of that world you enjoyed the most?

Thornton: The most distasteful part of the ecology is the creation of false markets for particular artists and artificially inflated prices. I most enjoy seeing a great museum show during installation, before it is open to the public. I like experiencing the work without a crowd and watching the artists and curators interact.

ArtsATL: You’ve said you tend to be more fascinated by “risk-taking” artists such as Damien Hirst versus more conservative ones like Jeff Koons. Is it a constant in your work on subcultures that you enjoy people who break the mold?

Thornton: That comment relates very specifically to the way those two artists handle their markets, rather than their artworks per se, but yes, I am very interested in productive, positive, creative rule-breaking. (But don’t tell my 14-year-old son, as he will likely misinterpret this comment!)

ArtsATL: Do you have a subculture in mind that you will study next?

Thornton: I’m researching the lives and identities of artists around the world. It is unlikely to have a subcultural structure, but I’m not sure yet.