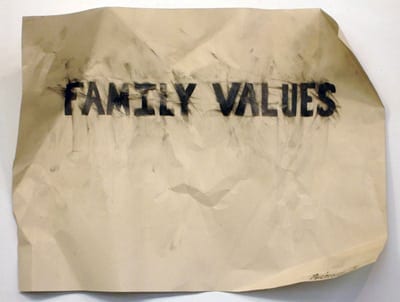 In “Family Values,” his third solo show at Saltworks, Michael Scoggins displays large drawings that look like notebook pages that replicate childish drawings, doodles and school assignments. Within that naive format, he examines the “doodle” as a keyhole into wild-fire, unfettered, messy psychological ruminations that, ironically, spill out in an uber-orderly, concise and deceptively simple form. The work gives the sense of someone — the “Michael S.” whose name punctuates the drawings — chafing against civilization’s bit. He uses the giant canvases — meticulously drawing the red and blue lines and cutting the large circular holes himself — as an exorcism of a surprising amount of rage, anxiety, vulnerability and romantic frustration.

Scoggins’ subjects range from crude and hilariously childlike images of Bigfoot, in “Sasquatch,” to poignant crayon drawings such as the “All-American Family” series (one is below), showing a family with linked hands, flanked by an American flag and a tidy home in the background. The Brooklyn artist uses that series of drawings, or “colorings,” to complicate our notion of what a family is. Scoggins, a graduate of the Savannah College of Art and Design, occasionally expands his essential repertoire of paper and pencil to convey fury and anxiety in a far more minimalist format. In “United States of America,” those words are obsessively written — dug into the paper surface — on archival newsprint that has been crumpled into a ball and then unfurled and flattened.

With that dismissive gesture, he takes words considered solid and unassailable and questions their integrity. Another example is “Home Sweet Home.” Scoggins has said of those simple phrases, on butcher paper and newsprint, that they “are in constant peril of losing their true meaning.” Language, values, nation and self all seem threatened in his work. In the works using newsprint, there is also an implicit critique of the decreased power of the press and the printed word in the age of economic meltdown and the Internet.

Scoggins will give a talk at the gallery beginning at 2 p.m. Saturday, February 19. The show will run through March 19.

ArtsCriticATL spoke recently with the artist.

ArtsCriticATL: How often are your works based on actual artwork you made as a child? Or are they just inspired by the style and spirit of the drawings you did then?

Michael Scoggins: When I first started this series, a lot of the works were based on actual drawings I made as a kid. Fortunately my parents saved everything, and I had access to a huge library of drawings from my youth. As the series has progressed, I have started to expand and base a lot of ideas on things I remember or what others have shared about their childhood drawings and experiences. My work seems to spark memories in others, which is great because I love hearing a good story.

ArtsCriticATL: How much trouble were you in as a child?

Scoggins: I never got into much trouble, but I did (and still do) have a wild imagination and would get lost in my own head.

ArtsCriticATL: Tell me about the “All-American Family” series, in which you place yourself in various family units: Hispanic, Hasidic.

Scoggins: A few years ago there was a lot of “What is American?” and “We’re real Americans” rhetoric flying around, and it irked me beyond words. That kind of language is about as un-American as you can get. America is a true melting pot and there is room for everyone, regardless of color, religion, beliefs etc. So I decided to present the American family in all its different shapes and sizes, with me becoming part of each family. It is commentary on what America is supposed to stand for, where it unites us rather than divides.

ArtsCriticATL: A political edge has often surfaced in your work and is certainly present in “Family Values,” with works like “tea=terror” and “Democracy.” What would you like for people to take away from your work as it pertains to politics? Scoggins: The work I make is always political, but obviously at varying degrees depending on the piece. I’m feeling a little more upfront with this new series and want to explore how words are corrupted by political agendas and lose their true meaning over time. I have never been shy about discussing my political leanings but feel that we can have disagreements and a dialogue without yelling at each other, as often seen in the current political climate.

ArtsCriticATL: Your work seems to balance vulnerability and pent-up rage. Is that a distillation of your present state of mind or more an expression of what you remember feeling as a child?

Scoggins: I feel the “Michael S.” character has definitely transformed over the years and has become more of an extension of my adult self. I want to present my work with sincerity, and it is truly a reflection of who I am. If that means showing vulnerability or rage, then so be it. I’m interested in talking about human nature and realism.

In some ways it is a way to vent or respond to things that are sometimes out of my control. It is a healthy way to make commentary on the world around me, and I think it’s been a way to cope throughout my life.

ArtsCriticATL: Is creating your work cathartic?

Scoggins: Sometimes. Art is about problem solving, and that can be rewarding.