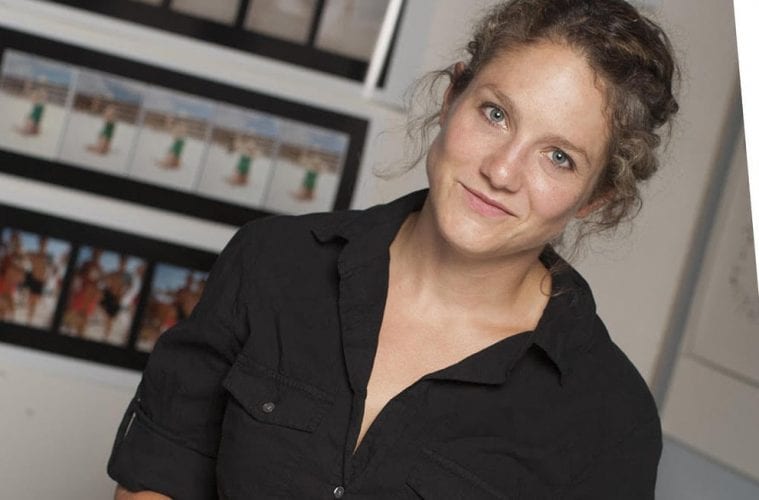 The informal as art: a conversation with photographer Jill Frank

If you are not an initiate of the Atlanta photography scene, chances are that you may not be familiar with the work of Jill Frank. A visual artist, working primarily in photography, she relocated to Atlanta from Chicago in 2011 to teach at Georgia State University (GSU). Although an established artist whose work has been recognized nationally and internationally, she has not shown much of her work in the city she now calls home.

She was awarded the sought-after Working Artist Project fellowship by the Museum of Contemporary Art of Georgia (MOCA GA). The annual fellowship is designed to help three visual artists with an exhibition, promotion, a studio apprentice and a major stipend to create work.

Frank’s solo exhibition at MOCA GA opens with a reception on Thursday, September 22, and this will be the occasion to see a selection of 13 large format prints from her most recent work. Frank’s work deals with social and cultural narratives. This selection investigates young adults’ identity formation and their rites of passage.

We took a moment to visit her at GSU and discuss her exhibition.

ArtsATL: This is your first solo exhibition at MOCA GA. Can you tell us how you selected the work for this show?

Jill Frank: Two years ago, I went to public beaches during spring break in Panama City, Florida, and I started taking portraits in social situations. The pictures changed over time and it became more about the things that people were doing in social situations. I am much older than this generation, so it is not my peers that I am photographing. I have become interested in the ways that these social activities change, from what they were in my youth to what they are now for this younger generation.

Frank: I would walk up to a group of people that were drinking beer together on a beach and I ask them, “Can I take your picture?” The situations that I ended up in differed substantially. For a while, I was very interested in drinking games, where people drink more and drink faster and sort of perform for the camera, shotgunning a beer is a good example. [This is where you poke a hole in the bottom of the can, release the tension on top, and guzzle it, which forces the beer down the throat.] My hope was to take formal portraits of these seemingly informal activities. I think they are overlooked because they are so familiar to us, culturally. It interested me to monumentalize these actions. It is, in a way, very cliché subject matter, but clichés are rooted in truth, which is what makes them interesting.

ArtsATL: Why do you think taking this formal approach make your photographs different from pictures taken and shared on Instagram by thousands? 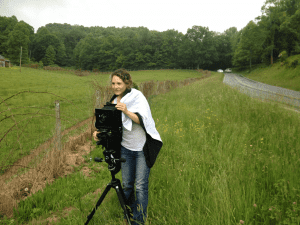 Jill Frank at the Hambidge Center for the Arts.

Frank: I thought I could take a picture of one of these moments, like this girl spinning this bat on the beach, and give it more formal photographic treatment — like a tripod-bound large format camera, lots of depth of field, intentional focus, composition and detail — so that the photograph allows for more contemplation. My idea was that this formalism would create conversations like, ‘Oh, she is doing this thing with a bat and it is a big deal in this moment, there is a lot of anxiety, a lot of tension, sentimentality and potential alienation; there is something at stake for her, in this moment,’ rather than what I think is happening on Instagram, ‘Look at this silly drunk person.’ I am very aware of the types of photographs that circulated on Instagram that dealt with the same subject matter, and I really incorporated it heavily into the project. I love some of the photos that I find on social media sites, I contemplate them, I am just not sure others do; what happens when images are circulating in a different context, does the meaning change?

ArtsATL: So is your show dealing solely with these images taken in Panama City?

Frank: No, because it took two and a half years, the project went way beyond spring break and the beach. I showed up at festivals that happened at daytime, where there was no access needed and when people were outside. Also, when this project started to be known here, people invited me to take pictures at parties and barbecues. They knew me and they knew exactly why they were inviting me and that I would bring my enormous camera.

ArtsATL: You have long been teaching photography at college level. Do you think that has had any influence on this series?

Frank: I do. This is the first time I have spent time photographing people who were so outside of my age range. This initially struck me as odd but I think it must have been influenced by teaching because that is exactly the age of students I teach, college students. While I did not photograph my actual students, they were helpful in talking about these issues.

ArtsATL: Do you continue working with this large-format film camera because of the quality of the prints, or do you think it helps taking more “formal” portraits and that people think you are a more “serious” photographer because you don’t use a DSLR?

Frank: I think it is the quality. It is a very cost-prohibitive camera and very heavy and difficult [to manipulate]. It is laughable, you really shouldn’t take a large format camera into the ocean, which I definitely did. There was a built-in sabotage there, but I enjoyed the unpredictability. I did not end up with the exact type of image that I set out wanting, but I like what happened. It plays a role and it ends up being part of the process but it is not by any means the thing that changes the picture completely.

What it does more than anything is that it requires a person to be still. There is this moment where a person holds some action for an extended amount of time, when often the action would have come and gone quickly. That extension can read in some of the images. Of course, this means that there is also a very high level of mistake making because people don’t understand how long they have to stay still, which is at least one minute.

ArtsATL: All the work you show for this exhibit feature portraiture. Is this your main and only interest in photography?

Frank: In this project, I made a lot of pictures of groups of people from far away. I have always done that. There are a few “landscapes” in this show and I certainly occasionally take pictures of objects and details that are not people, but I did not want this show to feel like an example of everything I had done. I want it to feel curated, intelligently edited. I felt that the portraits would take precedent.

ArtsATL: What are your impressions of the Atlanta art scene?

Frank: I think Atlanta is an incredible place to produce work as an artist. There is positive energy here. You can ask people to use spaces that I feel would be so inaccessible in a bigger city, you can rally people to help you with a project or be in a project. People are so generous with their time and there are some amazing spaces for experiencing artwork but sometimes it feels like the same group of people supporting the same events. Atlanta is a huge city, how can we get all of those other residents to come experience this awesome programming? I am not sure I have any ideas, but I think that ART PAPERS which often reaches outside of the art conversation and makes clever connections with the city of Atlanta, GSU with its diverse student population, and the Contemporary, which offers free admission, are making huge efforts toward broadening the art dialogue and including new groups of people.