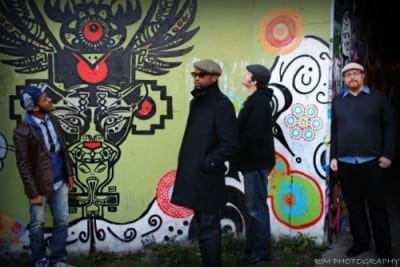 At 10 p.m. on a Monday night, Jacob Deaton is standing in the Five Spot parking lot in Little Five Points, chatting with a few fellow musicians. A thick, cotton-like humidity hangs in the air, a residual effect of an evening thunderstorm. The guitarist has been waiting patiently for his bandmates to arrive for tonight’s gig. Perhaps the storm has delayed the others — alto saxophonist Akeem Marable, electric bassist Kevin Scott and drummer Che Marshall — or maybe it’s the movie crew and horde of extras blocking half the street. (Rumor spreads that Jennifer Lopez or Cameron Diaz or possibly both are in the area.) Deaton checks the time on his phone and walks into the bar.

A little more than an hour later, after an opening set by the Ayah Drummers, Indie Revenge is onstage, navigating through its first tune with that night’s special guest, trumpeter Russell Gunn. It’s the second show of the band’s month-long residency at the Five Spot. Upcoming concerts will feature hand-picked opening acts — “some of the best groups in town that maybe not everybody knows about,” Deaton says — and Indie Revenge will tackle the oeuvres of the Smashing Pumpkins and Stevie Wonder on August 22 and 29, respectively. The three remaining Monday-night shows are $5 at the door and will start around 9:30 p.m. Indie Revenge was born at a now-defunct restaurant on the corner of Ivan Allen Jr. Boulevard and Marietta Street in downtown Atlanta. Deaton had been looking for a regular gig and happened upon Endenu, which was just about to open its doors. He negotiated his way into a weekly feature and started inviting musicians to play swing music in a quartet setting. Deaton soon established a regular lineup of Marable, Scott and Marshall, and they quickly decided to drop all swing pretenses and move in a different direction.

“Maybe we picked the key and just went, or maybe we just all listened and figured things out,” Deaton says. “After the first week of doing that, I was like, ‘We’re never doing anything else.'”

The group plays jazz in the style of, well, whatever they feel like. An amalgam of seemingly incongruous influences — Deaton grew up on rock and acoustic singer-songwriters, Scott loves metal and soul performers, and Marable has been playing jazz since middle school — the band’s sound is as unique as it is hard to describe. When asked by booking agents, Deaton has always said Indie Revenge focuses on anti-mainstream music.

“The most important thing we tell a lot of people is to just listen,” he says. “Don’t come with a preconceived notion of what you’re going to hear. Just make a decision on the music as it happens.”

Audience reaction may be the best indicator of how Indie Revenge performs. At the group’s record release party in Athens last fall, the end of one song was met with stunned silence. “There’s definite shock,” Marable says. “After certain tunes, it will be a still silence over the room. I want to make music that I would like to listen to, and I would like to go somewhere and be affected like that, where it’s just really strong, and I’m just undecided as to what to feel at that moment.”

It’s easy to find straight-ahead jazz in clubs and restaurants throughout metro Atlanta. But Marable, who plays in a straight-ahead trio with drummer Justin Chesarek, says there aren’t many experimental jazz musicians in town. Gunn and saxophonist Kebbi Williams are using new ideas in their music, but other than from a few key players, any sounds approaching the avant-garde are hard to find. In the current landscape, Indie Revenge is somewhat of an anomaly, bringing a fresh vitality to the scene.

Last year, the band recorded its debut live in the studio to give listeners the feel of a typical show. The disc showcases a music that’s certainly to the left of modern improvised music, but it doesn’t stray toward the more challenging areas of free jazz; in fact, parts of it — Marshall’s in-the-pocket drumbeats, Scott’s exuberant bass lines — can be boiled down to somewhat danceable music.

Listening is a big part of Indie Revenge’s aesthetic. To perform music that branches out in different directions, each member must be attuned to the other musicians onstage. Marable felt this cohesion while they were still performing at Endenu.

“I knew that when you played with the right people … it’s as if you’ve played [with them] for a long time,” Marable says of those early gigs. “I recognized that right away. It’s subtle, but it’s all the difference in the world as far as wanting to play more and wanting to come back and explore more.”

Because Indie Revenge’s music is far from the norm, Deaton realizes that it may not be marketable to a wide audience and that the band may never reach an appreciable level of notice. In fact, he’s heard from members of similar bands that he shouldn’t expect to make money for at least 10 years. But that doesn’t dissuade him from looking forward to the next gig.

“We know that what we’re doing isn’t mainstream and isn’t something that’s going to make us millions of dollars,” he says. “We’re just trying to make music.”