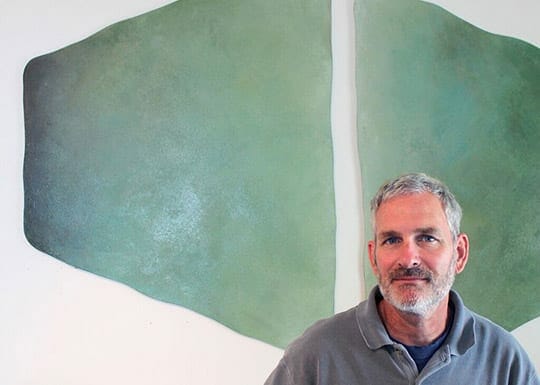 In Our Own Words: Gregor Turk, visual and public installation artist

Gregor Turk is known for his public art installations, ceramic sculpture, photography and mixed-media constructions. His work is included in the High Museum of Art, MOCA GA and numerous other public and private collections. He has a permanent public art installation in the International Concourse at the Atlanta Airport. (Photo by Anna Nelson-Daniel)

Before Covid, I was working on a commission — transparent images for five large windows at the Zone 3 police precinct on Metropolitan Parkway. I submitted several images for approval including group photos of middle schoolers and police officers I had taken four days before schools closed for Covid; a 1907 image of the police department’s bicycle squad; several historical images of Lakewood Fairgrounds in the 1940s and 50s; and one image of the 1966 Summerhill protest, the latter of which was not approved. I felt that photo was important because it changed the police department. My point was we are not a Ferguson, Missouri; that was my naïve mindset, that we dealt with this in the sixties. I thought a good bit of progress had been made, but clearly not nearly enough.

Then Black Lives Matter happened, and the Rayshard Brooks killing in the same precinct. Garrett Rolfe was the officer involved, so the first thing I did was make sure he wasn’t in the photo we took — I was glad he wasn’t because I wouldn’t have been able to use it. This was a challenging project to work on concurrent with Black Lives Matter. It kept me going for a good chunk of Covid and it was installed in October. I was able to continue to be productive and I had a show in January at Spalding Nix Fine Art, Choke II. It focused on choke points around the world. It closed a month before the Suez Canal choked; that would have been way more topical!

What really drives me is my affinity for public art. I am hoping for some longevity with some of my public art projects, but I have come to learn that permanent art isn’t permanent; Black Lives Matter has made that clear with the monuments. I put a lot of stock into public art because it’s able to engage the non-gallery going public, reinforcing place. I have always thought that’s the most important thing, having the work out there 24/7. You have no control over it, but you have initiated a conversation. I think that’s really important.