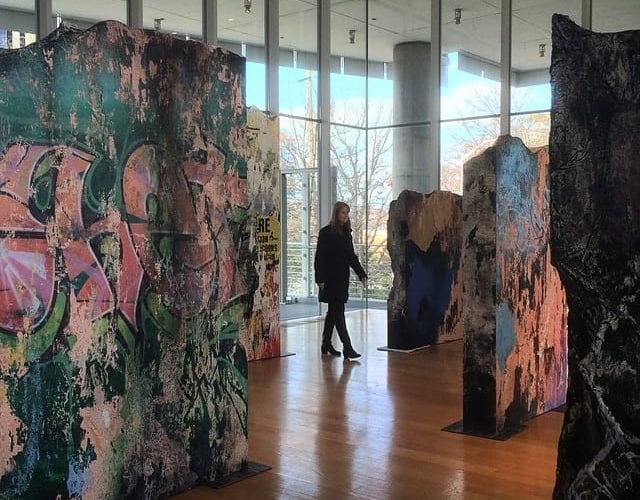 Curator Michael Rooks suggests a continuum of concerns in Imagining New Worlds, at the High Museum of Art through May 24, juxtaposing a retrospective of Wifredo Lam and exhibitions by contemporary artists José Parlá and Fahamu Pecou. The late Cuban-born artist married surrealism and the Négritude movement to explore Afro-Cuban cultural traditions and Afro-Caribbean identity. Parlá and Pecou continue Lam’s exploration of alternatives to mainstream notions of identity in bodies of recent work.

Parlá’s Segmented Realities (2014) comprises 10 mural-sized, three-dimensional paintings that resemble fragments of a graffiti-covered wall. Standing in the gallery like ruins, they bear scratched and scribbled words vying to compete with layers of thick paint, scraps of pasted paper and sprayed lines.

The surface of Sar, Coral Way and S. W. 93rd Court, Miami, Fl, 1987 (2014), for example, is covered with large patches of thick, rough, peach-colored paint sprayed over and under with a light blue. Black similarly appears underneath and in some areas, sprayed over top of the peach and blue. Crimson and white spray-painted graffiti tags emerge on top of and between the painted layers.

The edges and corners are broken and worn like an actual section of a wall from the titular street corner in Miami: the title of each piece in Segmented Realities includes a specific street address from places the Miami-born, Brooklyn-based artist has lived and the date he lived there. Like Romantic paintings of ancient ruins, Parlá’s “walls” are trompe-l’oeil replicas of places vandalized by graffiti, then neglected and ignored by mainstream society. Yet in this context, they also assert themselves as a demand to be seen. As the artist explains: “My thought and the impulse behind the gesture was as primitive as that of cavemen marking and drawing in their dwellings to assert their existence in a place and time.”

Three drawings (The Messenger I, II and III) depict a lone, black male with sagging jeans and sneakers, wearing an African-looking mask and a headdress adorned with cowry shells. Their torsos are washed in reddish-brown paint, and behind each figure is a simple golden shape.

“Sagging” — the fashion of wearing pants below the waist, often revealing underwear — is often described as both a demand to be seen and a form of resistance for marginalized individuals.

The circle and diamond in Messenger I and II are symbols of the Kongo cosmogram, an emblem of continuity and rebirth in central African spiritual traditions, and the opposing triangles in Messenger III reference the double axe of Shango, Yoruba God of Thunder. “Messenger” refers to Eshu, the messenger god of the Yoruba pantheon, whose trickster pranks were known to upset the cosmic order. In the painting Native Tongue/Ogbe Oyeku (2015), the Atlanta artist depicts himself on a make-believe cover of Negro Digest as the headdress-wearing, sagging black male. The meticulous naturalism of his rendering abruptly ends with his flat, gold leaf boots.

Gold played a significant role in the colonization of Africa and subsequent slave trade. Africa was a primary source of the precious metal for European markets. Gold was associated with royalty in traditional African societies and remains a sign of wealth; its conspicuous display is central in celebrity culture. Pecou makes the connection between hip hop and Négritude through his interactive sound station, explaining that both appropriate elements of other art forms to create original work. He invites visitors to make their own music using such sampled elements as sound effects, beat loops, vocal samples of a Négritude poem by Aimé Césaire and a song by hip-hop artist Nas.

The coincidental exhibition Gordon Parks: Segregation Story (through June 21) further illuminates strategies of resistance in both Pecou and Parlá’s work. The first African-American staff photographer for Life magazine, Parks was sent to rural Alabama in 1956 to document the lives of an extended black family in the Jim Crow south for a photo essay titled The Restraints: Open and Hidden.

Unlike civil rights photography that focused on organized protest and conflict, Parks’ color photographs featured individual family members engaging in mundane activities with dignity, despite separate but unequal “colored only” restrictions. Parks called his seemingly prosaic photographs his “weapon of choice” against racism.

Parlá’s Segmented Realities replicate the urban landscape (and poverty) that is often overlooked or deliberately ignored. Pecou’s sound station demystifies hip hop by breaking it down into accessible parts, and his caricature of celebrity hip-hop culture confronts mainstream society with its own misrepresentations.