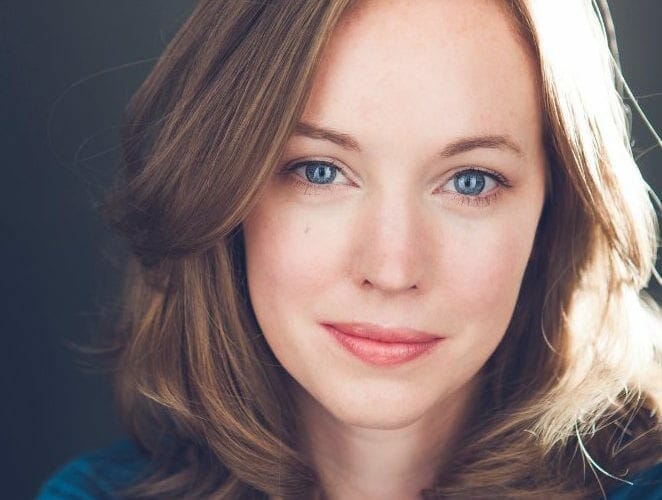 Atlanta actor Bethany Anne Lind has been seen onstage at the Alliance Theatre, Georgia Shakespeare, Horizon Theatre and Synchronicity Theatre, but she's mostly focusing on TV and film work now. The results include the newly released indie feature "Blood on Her Hands" plus "Mean Girls 2" and stints on "Ozark" and "Reprisal."

Bethany Anne Lind never intended to make Atlanta home. When she and husband Eric Mendenhall — both actors — moved here in 2006 after college, it was supposed to be a temporary stop on the way to Los Angeles or New York. The city won them over, as did the ample work opportunities.

Lind, now starring in the Southern noir thriller Blood on Her Name, began working in theater (the Alliance, Georgia Shakespeare, Synchronicity) before taking TV and film roles. She plays Leigh Tiller in Blood on Her Name, which screens only through Wednesday at Marietta’s Studio Movie Grill and is available on streaming services. Leigh runs the family mechanics shop while her husband is in jail. When she accidentally kills a man, she faces an ethical dilemma: what to do with the body.

Lind loves that Leigh is complicated, describing her as “a mother who has been handed a lot in life that she would not have chosen. She thinks she is doing the best with it most of the time, until she is not. She makes some bad decisions but doesn’t know what else to do. Leigh has always had to take care of herself, and she is going to do whatever she has to protect her son. That’s what the film explores — the lengths we are going to go for the people we love and the moral line of that.” Blood on Her Name is the feature debut of Atlanta writer/director Matthew Pope, with whom Lind worked on a short film and a feature he produced. He offered her the lead role of Leigh, so she read the script and it grabbed her. The thriller was filmed over a five-week period in summer 2018, mostly in North Georgia and surrounding areas. A week of reshoots followed.

Will Patton (Swamp Thing, Shots Fired, Falling Skies) plays Leigh’s father, and their father-daughter relationship has a few wrinkles. “Leigh has tried to estrange herself from him, but it’s a small town and she doesn’t have the means to get up and leave,” Lind says. “She can’t really escape what his choices have done to her. She has tried, but it’s too small of a world, too rural. She also kind of needs him, to a degree.”

Patton was less than chummy on set. “You never know what someone else’s process is going to be like,” Lind says. “He comes from theater training, too. He came down a week early and we talked on the phone some and read scenes, but he also wanted to keep some distance so he could feel that when we were shooting. It wasn’t weird or mean — it worked out very well. After the shoot we discovered that we were on the same lot in different TV shows. He came over and said, ‘I can finally hug you now.’”

Blood features several other Atlanta actors in smaller roles — including Mendenhall. Seeing friends and colleagues on set put her at ease, Lind says. Blood, incidentally, was the third consecutive independent feature she filmed. The others — Second Samuel, based on the 2010 Pamela Parker comic drama and filmed in Dothan, Alabama, and the thriller Through the Glass Darkly, shot in Georgia, are both awaiting release. Bethany Anne Lind plays opposite Joe Knezevich in the 2017 Alliance Theatre staging of “Shakespeare in Love.” (Photo by Greg Mooney)

Lind and Mendenhall moved to Atlanta 14 years ago from North Carolina, where they studied theater at Campbell University. “We got married young and weren’t sure of what route to take,” Lind says. “We didn’t know anyone who was doing what we wanted to. A few people I knew moved to New York and worked constantly just to pay the bills. They couldn’t even afford to audition. We decided to come here but we only knew one person.” That was Justin Anderson, a Campbell grad who frequently guest-directs throughout metro Atlanta and has been Aurora Theatre’s associate artistic director for six years.

“Atlanta now feels like home.” Lind says. “I spend a lot of time in New York, but I never felt home like I do here. That is important for me to do good work. I need to feel rooted.”

Lind quickly became an Atlanta theater mainstay and cites two Alliance productions — Carapace and August: Osage County (both in 2011) — as favorites. She’s won two Suzi Bass awards — for The Glass Menagerie (2011) at Georgia Shakespeare and The Last Schwartz at Jewish Theatre of the South (2008). She was last seen onstage in 2017, in the Alliance’s Shakespeare in Love.

She began doing television 10 years ago with a small role in the Lifetime series Drop Dead Diva. That led to the 2011 TV movie Mean Girls 2 with director Melanie Mayron. Lind played a teenager. “It was a pretty heavy supporting role,” she says, “and a great experience, learning how to transition from theater to in front of the camera.”

By then, Georgia had become something of a filmmaking hub and Lind found work in, among others, TV’s The Walking Dead, Stranger Things and Ozark — all filmed in and around Atlanta. She had a recurring role as Grace Young in Ozark and admits to being a bit starstruck at first. Bethany Anne Lind and husband Eric Mendenhall, also an actor, moved to Atlanta 14 years ago right out of college in North Carolina. In addition to careers, they have a 5-year-old son and a 3-year-old daughter.

“I remember fondly one afternoon with Jason Bateman and Laura Linney. I am an adoring fan of both, and I was a little nervous. Stars often go back to the trailer between takes but we were all waiting and had a conversation about kids and life. When Jason wasn’t directing he was able to have relationships with the cast and crew and I learned so much from Laura about taking risks.”

Last season, Lind played the dual role of sisters Molly Quinn and Grace on Hulu’s revenge drama Reprisal. She’s waiting to hear whether there will be a second season and, yet, theater is never far from her mind.

“I’m at a place where I am trying to get recurring roles, and I don’t want to put a theater in that position of accepting a role and not being able to do it,” she says. “I would love to get to a point where I am on a show consistently and have an off-season where I can get a play and commit fully.” Lind and Mendenhall have two children — 5-year-old Waylon and 3-year-old Rosalind — and can’t do a play at the same time.

Being married to another actor is something they’ve mastered over the years, although it’s not always easy. “Neither one of us has a predictable schedule, but we both get it. It’s made us stronger partners so we are constantly having to figure it out. The good outweighs the bad.”