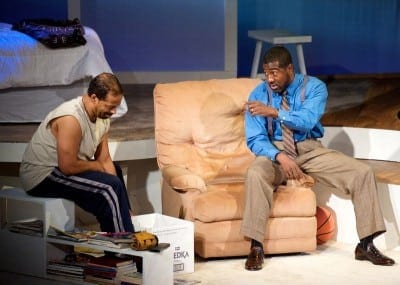 It’s almost 5 p.m. on a Sunday afternoon. Looks like it’s about to storm. The last thing you want to do is haul your sorry ass to a play.

Well, your loss. And almost mine.

Out of a self-pitying sense of duty, I trekked over to Horizon Theatre, Lisa Adler’s little miracle ensconced on the fringe of Little Five Points for the last quarter of a century. Its new play, “A Cool Drink a Water,” is part of its New South Play Festival. Written by Thomas W. Jones II, co-founder of Jomandi Productions and a frequent Horizon collaborator, the piece can be taken as a riff on Lorraine Hansberry’s dated but potent classic “A Raisin in the Sun” or as a stand-alone work. Either way, it’s an accomplished and provocative few hours at the theater.

As was true of Hansberry’s Youngers family 50 years ago, Jones’ Youngs are the sole black family in an increasingly gentrified area. The family matriarch, Mamma Lee (Bernardine Mitchell), has technically passed on, but that doesn’t prevent her ghost from having long chats with her daughter Benita (Marguerite Hannah), who along with her brother Walt (Jones) inherited the place.

Problems abound. Benita and her husband Asa (E. Roger Mitchell, in blue shirt in top photo, with Jones) haven’t shaken off the effects of a failed do-good mission to Africa. Walt, still smarting over being forced into early retirement (“It should’ve been my choice,” he maintains), wants to sell the family home and move on. His wife, Ruthie (Donna Biscoe, at left in lower photo, with Hannah), wants them to slow down and enjoy each other’s company. Their 23-year-old son Trane (Enoch King), who still lives with them, dreams of being a hard-ass rap star — though, as his father points out, Baldwin Estates, as their subdivision is called, isn’t exactly “the hood.”

As a writer, Jones relishes character and dialogue and has a gift for both. He’s less interested in plot; the first act sets up too many themes, from feminism to African heritage, to be resolved in depth in the second. And then here’s the old adage that, if you show an audience a gun, you’d better do something with it. Jones shows us two … and doesn’t.

Still, “A Cool Drink a Water,” which takes its title from Maya Angelou (“Just give me a cool drink of water ‘fore I die”), is never less than involving, with touches of both “The Cherry Orchard” and “House of Blue Leaves.” And the exceptional cast, under the guidance of Andrea Frye, tosses their lines and their characters’ emotions back and forth with well-timed precision.

In the showiest part, Jones can be an overbusy actor, but the audience loves him and he uses that easy engagement to share focus with the ensemble. Further, he’s a generous writer, giving each character his or her moment in the spotlight.

And finally, the Show Must Go On Award. During a particularly charged scene between Benita and Momma Lee, a particularly vehement electrical storm outside blacked out the theater, momentarily. The generator (or whatever) came back on, the actresses hung in bravely and, after one last jarring thunderclap, Hannah calmly delivered her next line: “Is that all you’ve got, Momma?”

Now that’s what I call going on with the show.