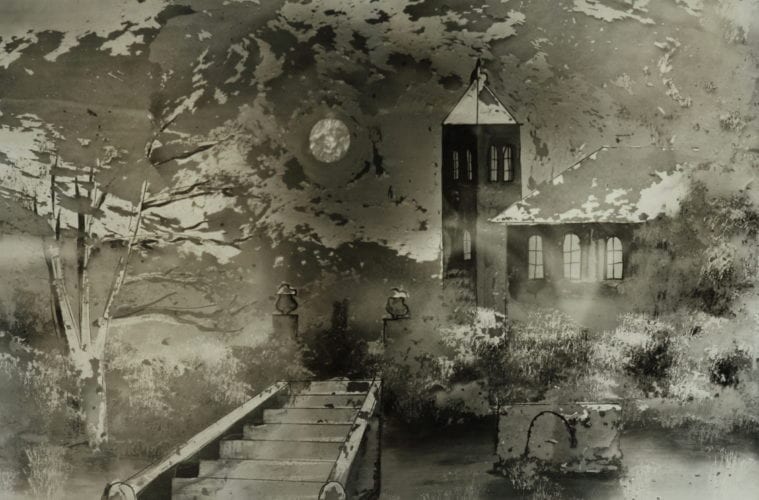 Lucinda Bunnen recalls the New Orleans trip she made in 1980 solely to buy photographs by Clarence John Laughlin. When Bunnen, who kick-started the High Museum of Art’s photography collection a decade earlier, heard Laughlin was a prestigious photographer with an undervalued portfolio, she pointed her VW van southward for the 470-mile drive. Much of the photography the High has today involved Bunnen traveling around the South and meeting (often staying with) iconic photographers — and coaxing them to sell her their most prized work. 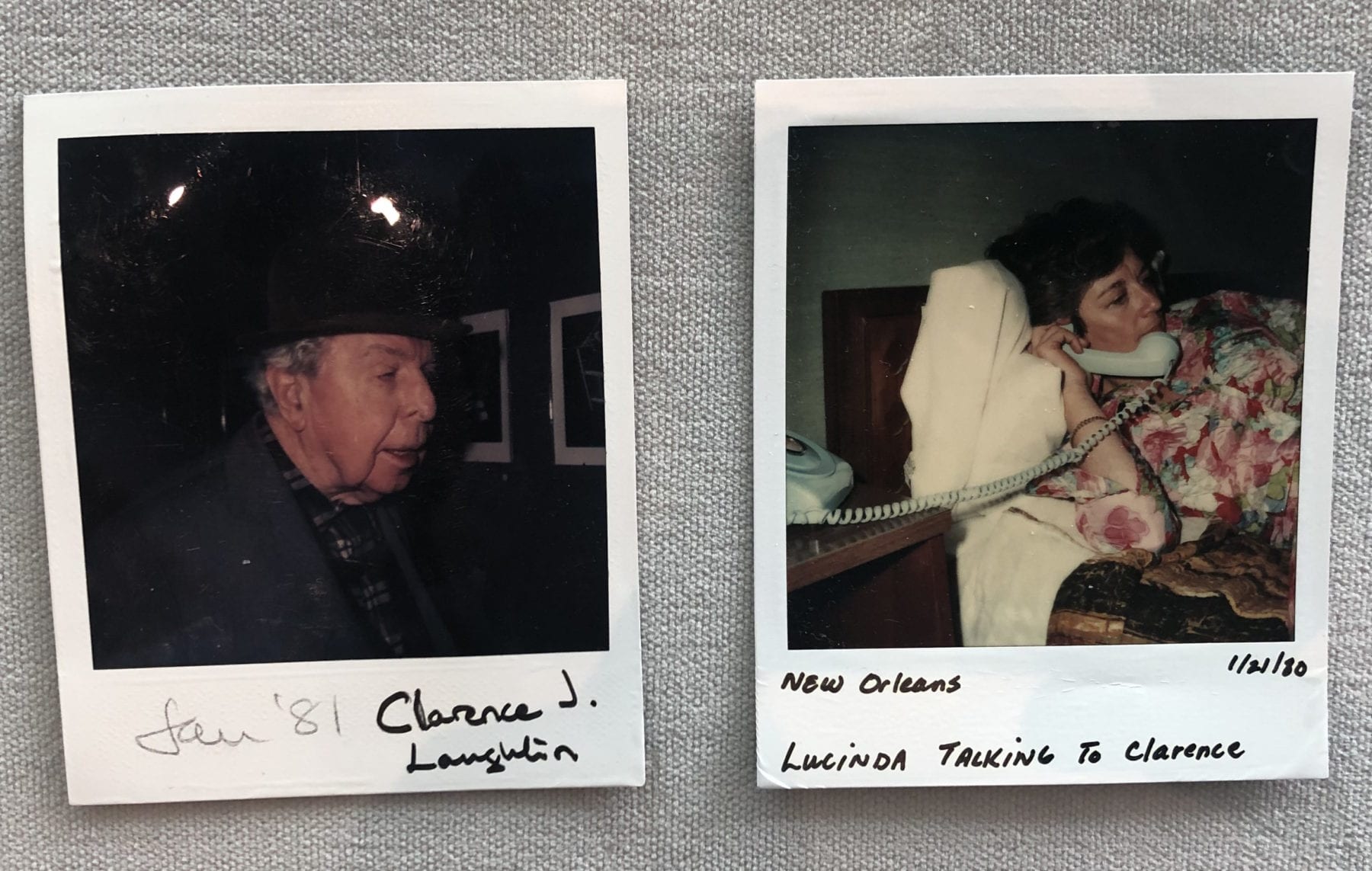 Snapshots from the 1980s: Clarence John Laughlin is on the left. Lucinda Bunnen, speaking to Laughlin by phone, is on the right. The longtime Atlanta collector, photographer and philanthropist is now in her late 80s. (Courtesy of Bunnen)

The first piece you see in Strange Light: The Photography of Clarence John Laughlin (at the High through November 10) is The Bat. Acquiring it, Bunnen says, took days of cajoling. The image focuses on the decaying arches of an old Catholic church. Inside, the gauzy drape of black fabric in a vestibule evokes the shape of a large bat about to fly out of the picture plane. Bunnen — a longtime collector, philanthropist and artist — loves images in which one item may evoke something different. She had to have it. Laughlin was hesitant. It was the only copy he’d made, and he loved it. The piece perfectly encapsulated his haunted photographic view of his native New Orleans.

“I told him, ‘John, it’s for a museum,’” says Bunnen. “And the next day when I went down for breakfast, the print was sitting on my plate waiting for me.”

That story demonstrates the spirit of the High’s photography collection. Bunnen, along with museum director Gudmund Vigtel, created a collection in the 1970s and ’80s that focused on the independent spirit and vision of photographers (particularly Southerners like Laughlin) through personal purchases.

Instead of a collection of formalistic, auction-block images bought and traded by oligarchs, the High’s collection features quirkier images from artists who aren’t breaking records at Sotheby’s. Artists like Laughlin (1905–85), and many others in the High’s collection, are the antithesis of the cold, calculated photographic style favored by institutions like Yale and the Guggenheim.

Bunnen helped bring in about 50 Laughlin works, so you see her taste throughout the exhibition. She’s especially fond of images in which an inanimate object comes across as human. The Insect-Headed Tombstone (1953), for example, features a dried-up flower bouquet atop a tombstone, looking like a person staring back at you. 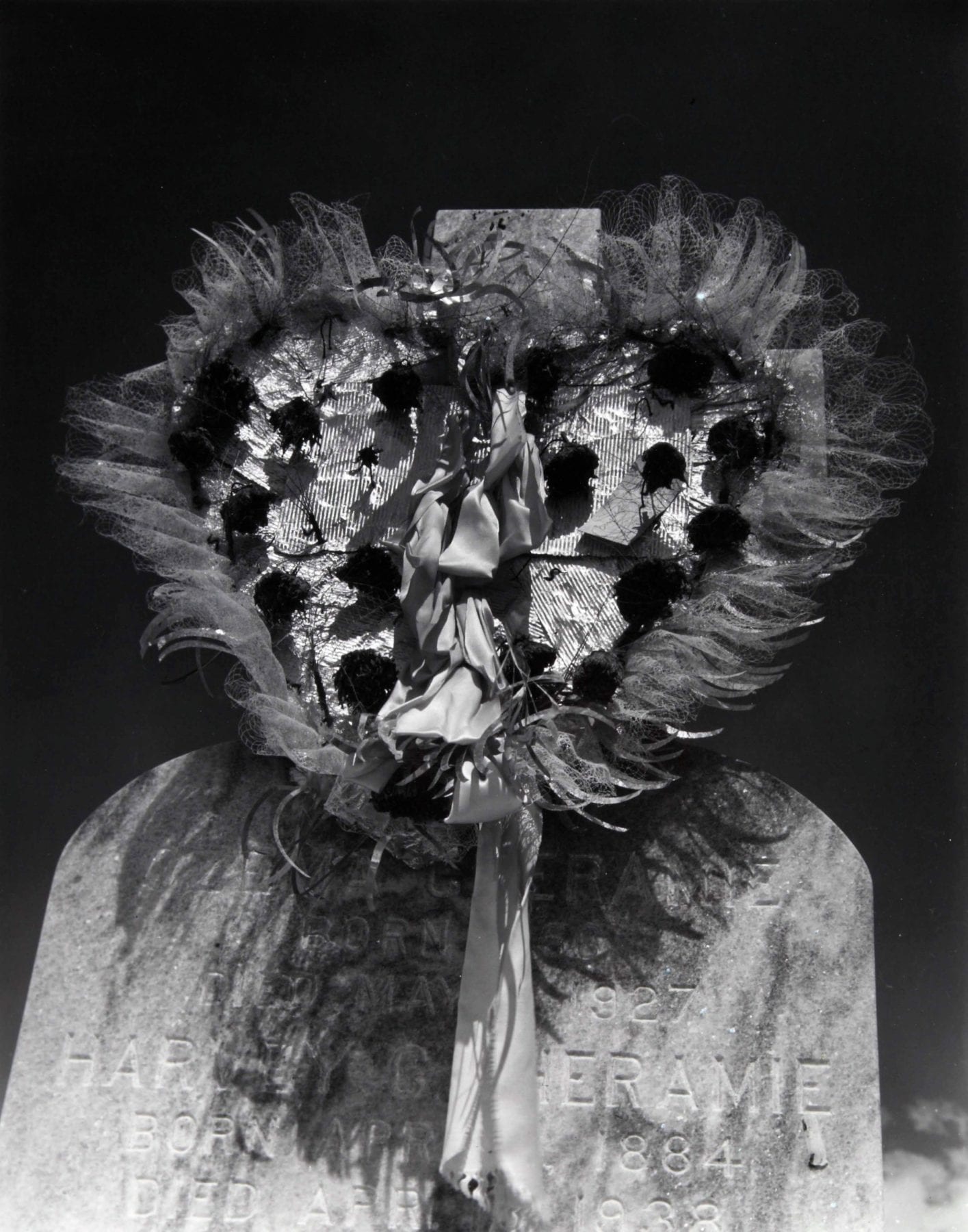 The Insect-Headed Tombstone, from 1953 (Courtesy of Bunnen and the museum)

This ability to capture an image but to add an ethereal element is indicative of Laughlin’s style. It’s like Southern Gothic literature captured in a single frame — enchanted, forbidding, unraveling at the seams. The more you look, the more hidden secrets you find. Like in a Tennessee Williams play, Laughlin’s images have ghosts lurking in plain sight.

Bunnen, a photographer herself, also appreciates a high degree of technical innovation. One such image is Passage to Neverland (1958), a classic Laughlin depicting a spooky, dilapidated Southern home. He manipulated the work to make it look like a mixed-media watercolor painting and paper collage. Images take on large, blocky, sharp-edged shapes, and the entire image looks nothing like a photograph.

Bunnen says Laughlin likely “solarized” the print — which means exposing it to extra light to give it a stamped-tin look. Elsewhere in the image, Laughlin appears to have drawn directly onto the negative before printing. It’s the kind of photograph that comes from deep in the artist’s imagination, and captures a world few can see.

“I tried to create a mythology from our contemporary world,” Laughlin once said. “This mythology — instead of having gods and goddesses — has the personifications of our fears and frustrations, our desires and dilemmas.” 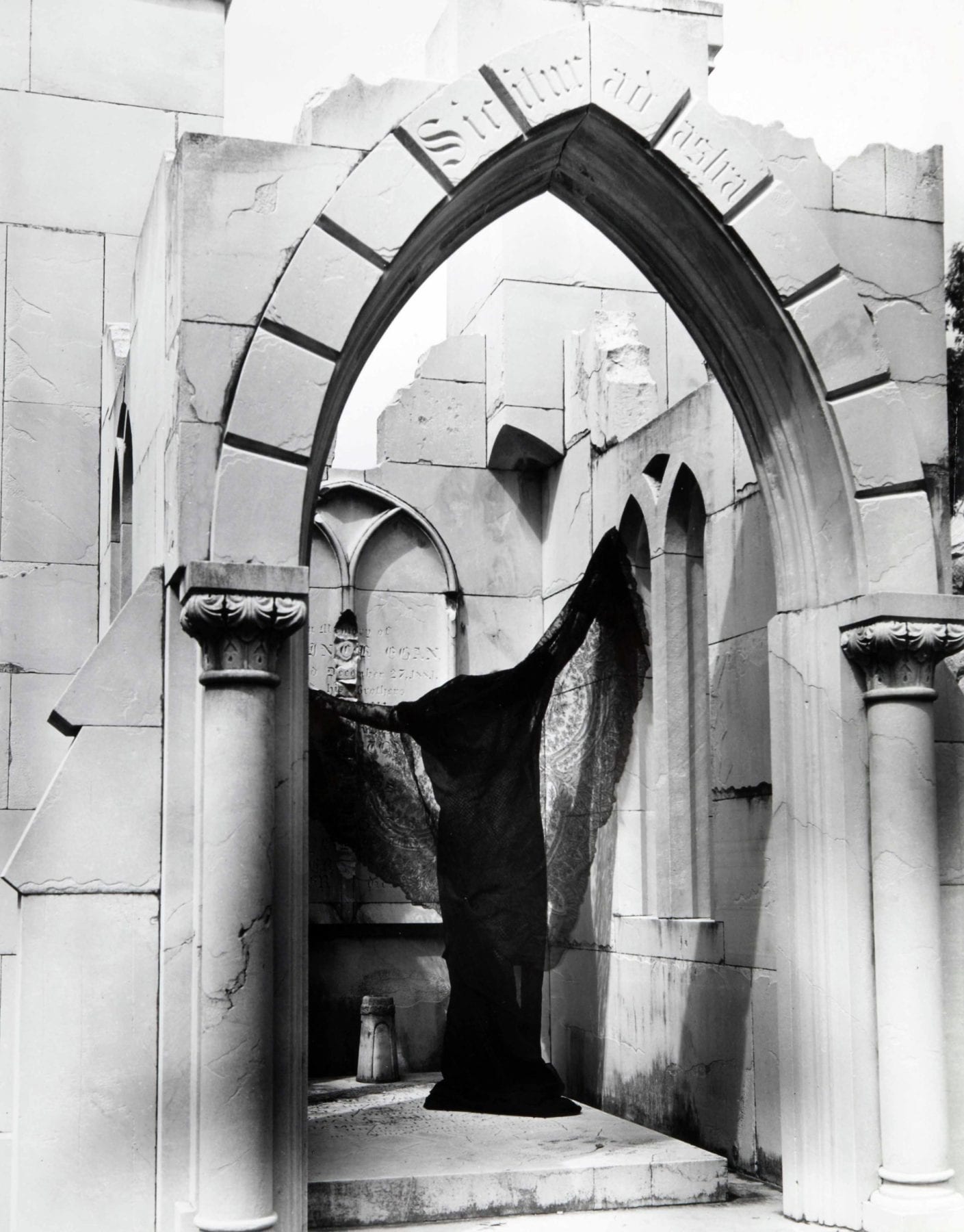 The Bat, from 1940. After much cajoling, Lucinda Bunnen was able to convince Laughlin to part with the photograph. (Courtesy of Bunnen and the museum)

About 100 of Laughlin’s works are on view here. Curator Gregory Harris says the show features most of the High’s Laughlin holdings. In addition to the Bunnen-acquired photographs, the High added another 50 or so prints by Laughlin and other artists in 2015, with the help of a multimillion-dollar gift. Laughlin images that didn’t make the show are mostly repeats, where better prints already existed.

Harris and his team were able to pull out a lot of work that tells the story of Laughlin’s life as a photographer. In some of the only color work on display, we learn that he managed the CIA’s first color photography lab during World War II. Long before photographers like William Eggleston brought color into the fine photography world, Laughlin was making way for color images to exist. His color work features abstract Rorschach-looking images of bleeding color blobs.

Elsewhere in the show, you’ll find two images of the same decrepit plantation, one shot by Laughlin and one shot by Edward Weston. The images couldn’t be more different. Weston’s is formalistic, showcasing the building’s architecture with perfect proportion. Laughlin creates an image that highlights the decaying, jumbled façade and positions Weston’s wife in a sheet in the middle of the image as a ghostly specter. 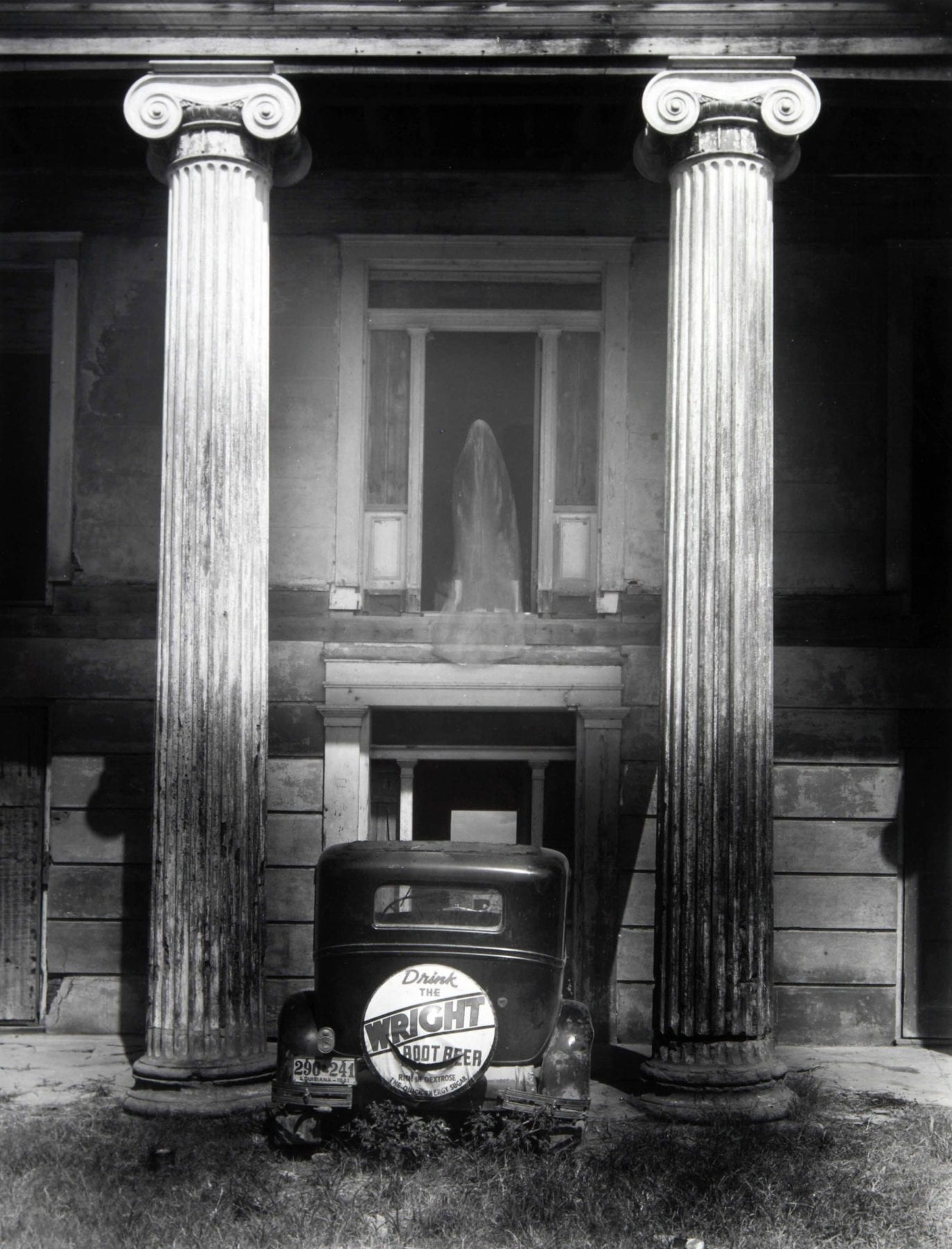 Time Phantasm (The Apparition), from 1941 (Courtesy of the museum)

The joy of seeing High’s photography shows lies in their personality. Some institutions boast about their photography collections with six-figure price tags, images from early American masters and iconic photos that make the cover of auction-house catalogs.

But the value of a photograph is more than what it can fetch on the market. The value is how well it can move the person looking at it. This is precisely what you get with Laughlin — images with spirit, and spirits. He shows how photography can move beyond the formalistic and into the spiritual.