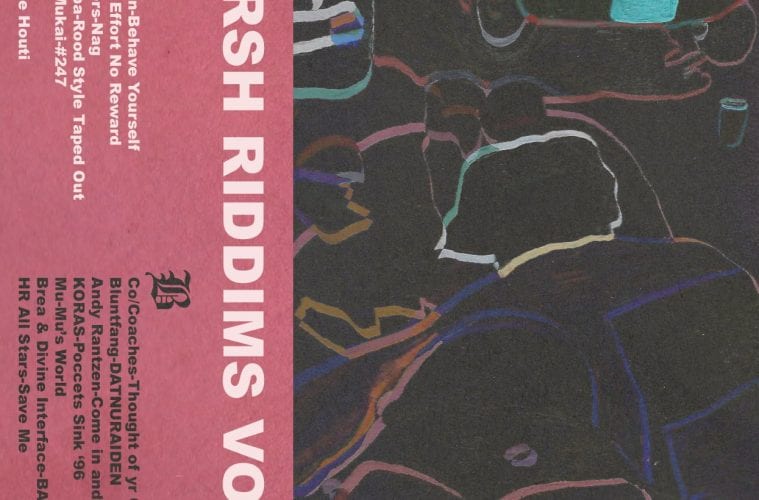 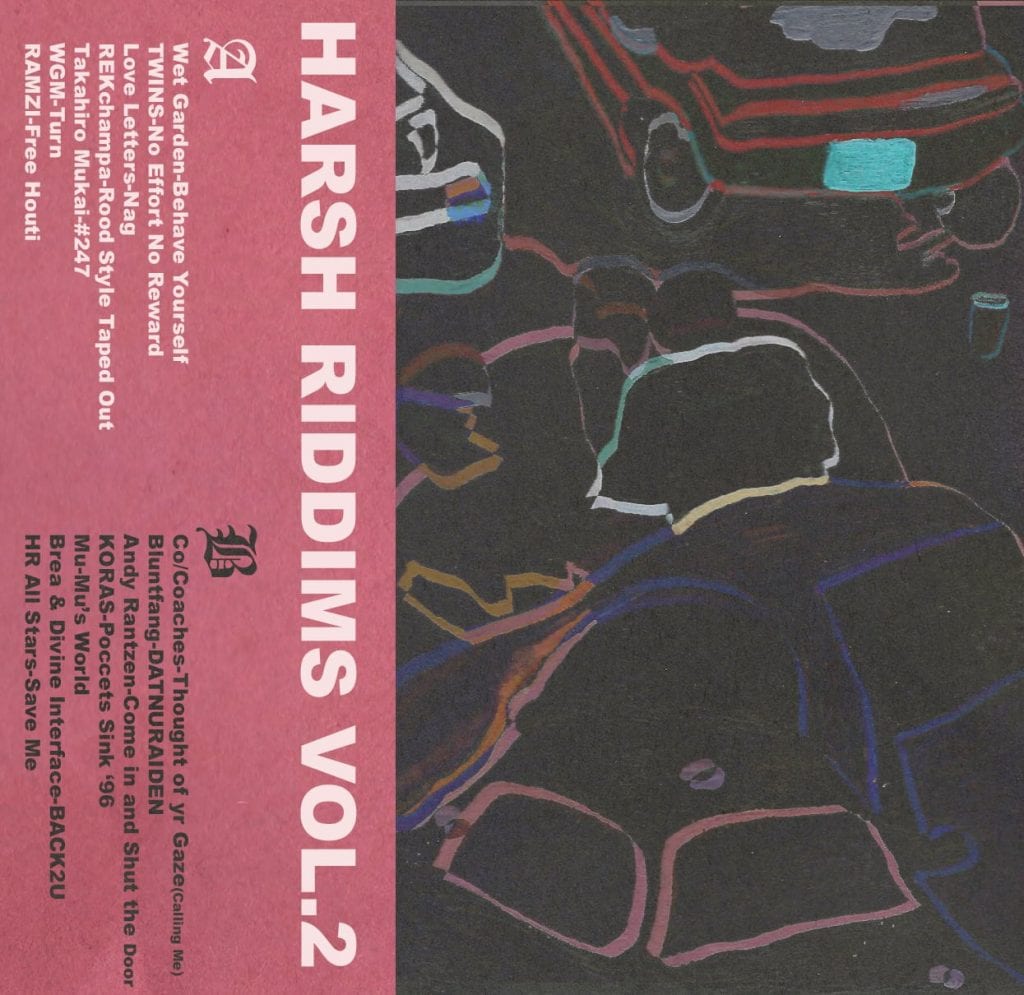 At .5 inches the spine of most tape insert cards curves then unfurls into papery panels. To the left, the spine bends into a one-inch tail — a stub of text that rests just above the pliant circle of teeth that holds the tape reels. This folded insert looks like a “J” and is aptly named a J-card. As tapes reemerge on the music market, so do multiple allegations against the medium’s alleged elitism, poor functionality and limited sound quality. But attention to the J-card-as-art-form is lacking. Paper weight, color scheme, typography and imagery are all aesthetic selections that imbue tapes with an artistic intentionality. J-cards are art, as evidenced in Ryan Parks’ work with local tape label Harsh Riddims. 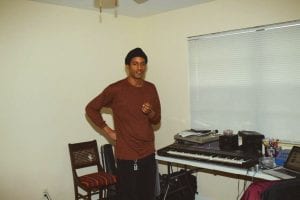 Described by The Wire as “draw[ing] on diverse influences from lo-fi electronics and woozy house to soulful synth pop, R&B, hip-hop and rap,” Harsh Riddims was formed to better support local underground acts and form international connections. “Harsh Riddims is an art project — just a big art project,” asserts founder, producer and J-card artist Ryan Parks. “I identify as an artist in the broad sense. It’s a vague term that people can use to tie everything together when you do a lot of different things.” The label forms the root graft for his various artistic functions: promoter, producer, art director and creator. Embodying so many roles, he readily admits that it can be hard for others to identify exactly what he does. “It’s hard to connect the dots when you don’t fit in one category.”

On the music curation and administrative end, Parks notes, “it’s strange for me because running the label is a different kind of energy. Like art-making, you start to develop a process. You’re pushing your ideas and have to ask yourself, ‘What’s an effective way to ask for things and present yourself? How are you going to get the best response?’” Cultivating a subcultural presence on an international scale with one hand while building that very scene with the other requires craft. It’s branding in an anti-capitalist model. As Parks notes, profits from one release are just funneled into the next. As long as it’s self-sustaining and people seem to like it, it’s working.

Moreover, through its curatorial practice of selecting and supporting bands, Harsh Riddims is a truss. “I want to see my own ideas materialize; I want to see my friends who are as active as other international scenes get the support they deserve.” Running a local label enables Parks to craft the channels of distribution as well as the production itself. “Seeing my ideas come to life in the way I want them presented is a bigger marker of success for me than money.” Removing commercial risk translates into a myriad of possibilities for a tape label. The landscape is primed for new networks and unmarketable schema. Importantly, subcultures are forged and sustained through the artistic freedom of non-commercial viability. Parks is more than doing his part. “I have both broad tastes and really specific tastes. Many times, I just don’t see my tastes represented. Possibly, I have a different eye.” 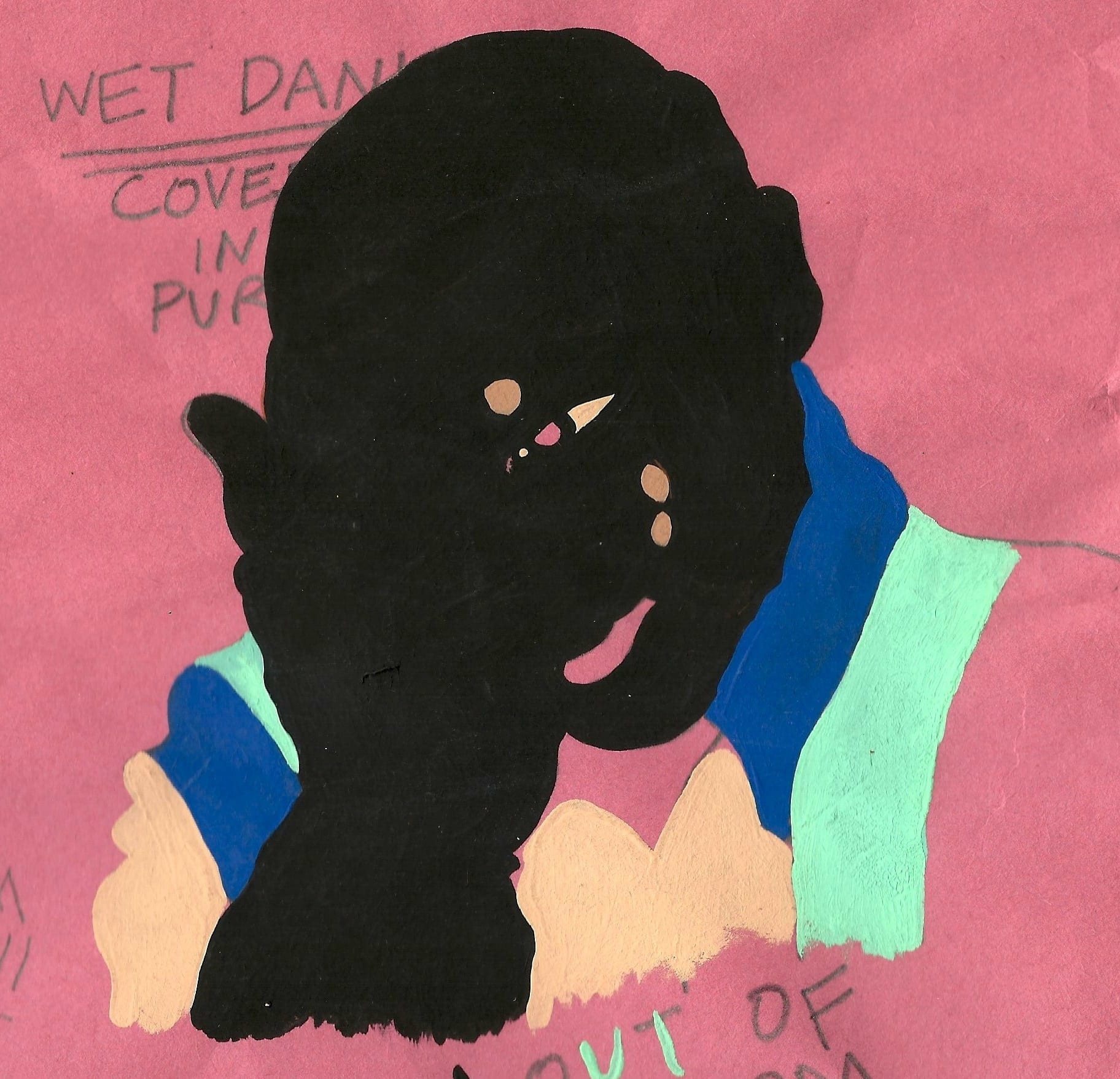 This difference in aesthetic choice and representation is evident in his J-card art as well. Describing his practice and influences, Parks notes, “I definitely love construction paper. Similar to making tapes, it’s inexpensive. As an art material, it has texture; when you scan it, it has a life to it. I like that it’s very child-oriented and works well with my subject matter. Most of my pieces reflect or are reminiscent of my family in some way. I’m very influenced by Jacob Lawrence. I also really like skating — skating aesthetics are tied into my work.”

This is not an abstract comparison — the inclusive package-deal nature of Harsh Riddims is easily compared to skate culture. The subcultural bundle of skate videos and their soundtracks, streetwear and board design, and photography enabled skating to be experienced as a lifestyle with a unique aesthetic rubric. As i-D Magazine notes in “The Second Wave of Skate Culture,” skateboarding has remained a hub for DIY and anti-mainstream expression. It accomplishes this via its art and its outlier status. “It’s about personal style, music, artistic tastes, a way of speaking … It’s a whole culture.” Parks brings a similar lifestyle-as-art presentation to Harsh Riddims. As such, representation is key. “For me, the biggest thing is I want these people to be like represented. I want to see more young, black people doing things that are not represented elsewhere. It was important to me when I was young to see people who looked like me in the crowd. Ultimately, it’s not an angle or marketing tool. This is really my life.”